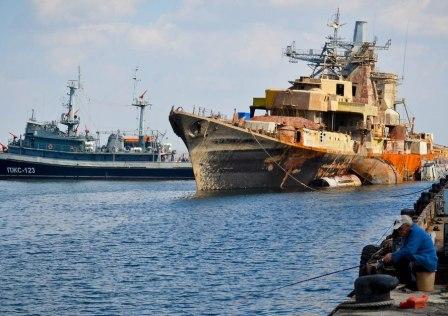 On Ukraine Today’s Viewpoint, Rahim Rahemtulla is joined byMykhailo Samus, one of Ukraine’s top military experts, to discuss the electricity blockade in the Russian-occupied Crimea.

Rahim Rahemtulla: We wanted to talk to you today about the blackout in the Russian-occupied Crimean peninsula. It hasn’t had electricity now for several days, after electricity pylons in mainland Ukraine were attacked and destroyed, blocking electricity flows into occupied Crimea. It has been quite a controversial case, in general. Ukraine hasn’t being in a hurry to repair those powerlines to get Crimea back on line.  As a military expert you have obviously seen a different side to this. Apart from the civil problem created for residents and businesses, there is a military aspect here, which is less well-known. Perhaps you could tell us a little bit about that.

Mykhailo Samus: Yes. It is very interesting that even from the Soviet times, Crimea was like an aircraft carrier for the Soviet military power in the Black Sea region. So if Ukraine now is in a conflict with Russia, we could understand it as power blackout for Russian aircraft carrier with huge military power now, let’s say 30 thousand people: military, soldiers, sailors, staying in occupied territory. So, if we are talking about the power blackout, we need to understand that it’s absolutely effective instrument to destroy military power of Russia in Crimea.

R.R.: And you believe this is what was in the minds of those who were behind this power blockage, the people who destroyed [the pylons]? Is that what they were partially looking to achieve?

M. S.: I am not sure, but as a military analyst I could say that it is pretty effective. Because if you could imagine how much electricity we need to keep, for example, ships to be in normal service, like air-defend system. It is a huge power to be able to control the airspace, for example, around the Black Sea fleet, to keep all of missiles, all of ships in proper condition – it is huge power. In this case, I absolutely support the situation, because when Russia is trying to make and collect its forces in this region to fret NATO, for example, because they are talking about tactical missiles with nuclear heads in Crimea against anti-missile base in Romania, for example. This is very interesting. To keep these missiles in proper condition they need a lot of power, so blackout now helps NATO to be more secure.

R.R.: I think, this comes as Russia is involved in Syria as well as stepping up its operations there in support of President Bashar al-Assad. I feel like it is not a coincident that this blackout is coming now: it’s affecting the Russian military, the Russian military at the moment is obviously spread very thin. From your point of view, what does this mean for Russian military as it is trying to become involved more in the Middle East as well?

M. S.: Yes, but it is very interesting about some of the Black Sea fleet shipsparticipating in this operation, because the Black Sea Fleet is responsible for this Tartus base in Syria. It is normal.Of course, the ship from Northern fleet or Baltic fleet could participate, but the Black Sea fleet is responsible for this operation. It is very interesting that these ships, which actually need to be in service in the Black sea fleet main naval base in Sevastopol, now are under attack of power blackout. Of course, it doesn’t make Russian position stronger. It is not very nice situation for Putin, because you told about this civilian information background for blackout, because they need to explain what actually is going on. After more than one and a half year of the Russian occupation of Crimea they don’t have any capabilities even to supply energy to naval base. And I’d like to say that Novorossiysk Naval Base is not a solution for this problem, because during the winter period they have super strong Bora winter wind there. It is impossible to base military ships there. They need to base it in Sevastopol. And Sevastopol doesn’t have enough energy. It is an absolutely crazy situation for Russian forces there. Couple of days ago, in reaction for this power blackout they sent a couple of battalion task forces for this airborne division from Russia to Crimea. Maybe they have some military ways to solve the problem, maybe attack Kherson oblast. We should take it into account.

R.R.: It’s an incredible scenario. I was reading one commentator who did suggest that what can the Kremlin really do here short of sending troops into mainland Ukraine to try to restore power. It seems like a crazy way to go. But we can’t put anything past the Kremlin at this point from what we’ve seen over the last couples of years. Does this not risk escalating the conflict? This could push Crimea further away from Ukraine, couldn’t it? This could be the wakeup call the Kremlin needs to get Crimea in order and to create a proper power source and proper transport lanes and really make it become a part of the Russian Federation. Do you see that as a danger?

M. S.: I think it is maybe somewhat opposite situation. When Putin proclaimed Crimea as the Russian land and Crimeans as the Russian people, it was a pretty long time ago. If Russia is a great country they had a lot of time to make the transportation infrastructure, to make electricity infrastructure and whatever. Now, they have a problem even to show the Russian television. They can’t even support the level of propaganda. It is a really dangerous situation. And I’d like to say, I saw the reaction of pro-Ukrainian part of Crimeans and they support this situation. Because the problem is that Russia didn’t make any development for people for that period. They were just killing middle and small business and tourist places, killing everything that naturally belongs to Crimea over hundreds of years, and just creating a military base there with a lot of ships and aircraft. I think that normal people, like businessmen, who would like to seeCrimea like a great tourist place for all of Europeans, for example, they are supporting power blackout, because maybe it will make some steps to deoccupation of Crimea. Putin now has a tough time to show something, but it is impossible. They even cannot provide the electricity. What about security and higher standards of life?