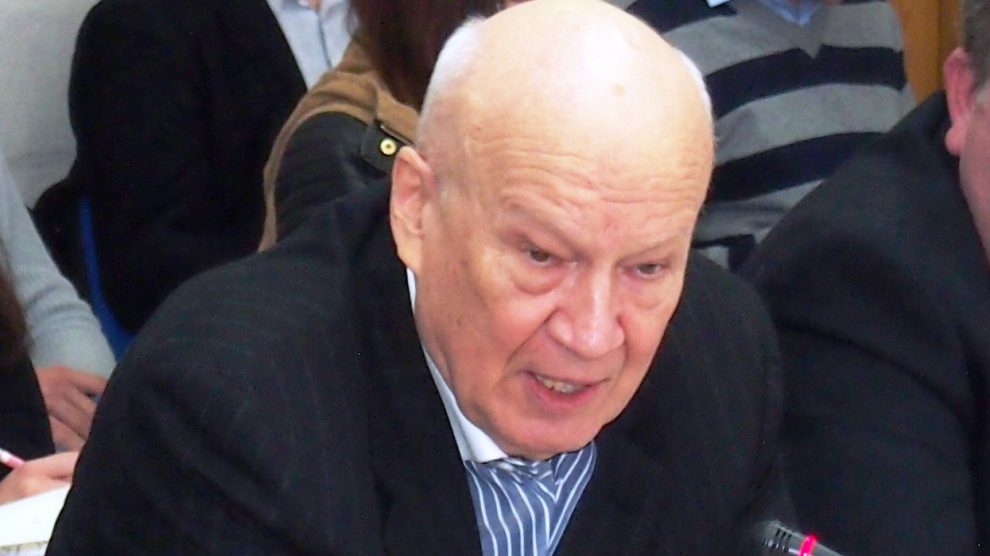 The new National Security Strategy of Ukraine clearly identifies the directions for general reforms in the defense and security sector. A considerable section of it is devoted to the efforts necessary in the military-industrial complex (MIC).

The new National Security Strategy of Ukraine clearly identifies the directions for general reforms in the defense and security sector. A considerable section of it is devoted to the efforts necessary in the military-industrial complex (MIC).

Today, Ukraine’s independence is under great pressure in terms of both time and space. In this respect, it is very important that we use all available capacities with maximum efficiency, to create weapons and military equipment that could counter the resources deployed by the Russian army in the eastern regions of our country. Because of this, cooperation with NATO countries and their defense enterprises can become a great incentive that will help us quickly solve a whole range of tasks faced by the Ukrainian military-industrial complex.

Concerning the MIC, it is worth reminding that in the Soviet times, Ukraine was among the European and even world leaders in manufacturing of highly varied and effective weapons system. Three branches of the Ukrainian military industry were operating at the global standard: strategic missile systems (production based in Dnipropetrovsk), armored vehicle production in Kharkiv, and shipbuilding in Mykolaiv. Those facilities operated a closed production cycle and supplied the Soviet Union with weapons to be globally reckoned with. Simultaneously, top-class design bureaus and centers operated in Ukraine, specializing in design and production of radio equipment, radio location systems, and communications and control equipment.

After Ukraine gained independence, the above three key industries, especially shipbuilding, and the space and missile field, found themselves in a grave situation, chiefly because large-scale military orders that these industries used to receive during the USSR times were, for objective reasons, no longer available.

At the same time, it is worth noting that a large portion of design bureaus that specialized in radio equipment, radio location systems, and communication technologies, transformed into private enterprises, which are helping Ukraine today, in a wide range of tasks related to target acquisition and determining the characteristics of weapon systems deployed by the enemy in eastern Ukraine. Today, these tasks are resolved in practice by private companies. And today, it is imperative to organize relevant work (in coordination with the General Staff and the Ministry of Defense) in a way that would ensure that national private enterprises are properly represented in the government defense order. This task is, first of all, political.

Having been involved in creation of the defense order in the past, the author can testify that only a small number of the private defense sector companies were granted a place in the government defense order, both in 2014 and 2015 (albeit the trend was less pronounced this year) – even though the author strongly believes that such private enterprises manufacture products with high performance characteristics. We are not making this statement to criticize the actions of the government, but to point out the need for more efficient use of the existing technological potential of Ukraine, as well as its technological reserve, which has great room for growth.

This growth will become all the more swift and efficient if we can come to an understanding with NATO countries concerning our projects.

Overall, the relationship between Ukraine and the Alliance states is reminiscent of the ebb and flow of the tide. Back in 1998, we reached a very important step in developing the AN-70 military transport plane. We enjoyed support from the EADS conglomerate and, among others, the Federal Ministry of Defense (Germany). The reason for that project not taking off was not the position of NATO countries, but that of Russia, who de facto sabotaged that contract by refusing to grant certain orders to NATO countries in the scope of the AN-70 project.

Failure to realize other prospective contracts that were planned with Sweden and Poland can be attributed to the lack of political will of the leaders of Ukraine at the time. That factor prevented Ukraine from reaching a serious level in military and technical cooperation, rather than be satisfied with small-scale ad-hoc contracts.

Naturally, Ukraine has some problems. It has been considerably slow in the issues of standardization when switching over to the parameters and norms used in the weapons systems of NATO countries. The Ukrainian legislation does not yet provide for a way to join private and state-owned enterprises in a single pool. It is well known that in the West, the role of principal designers and manufacturers of weapons systems belongs to large private corporations. But, importantly, a certain breakthrough is being observed right now – at the very least, in form of the strong will to improve the situation. We believe that Ukraine has every capacity required for that.

For example, today, the Lockheed Martin Corporation, which has always been Ukraine’s competitor, is showing interest in Ukraine. The author, at one point, represented Pivdenne Design Bureau, and was directly involved in the design of SS-18 and SS-24 systems, strategic missile complexes that are still justly considered to be the best in the world. Why not establish contacts with Lockheed Martin, similar to the contacts Pivdenne Design Bureau has with the Antares space project?

Ukraine has great potential, and it is not limited to its highly qualified computer developers, who currently work all over the world. Today, life forces us to view many things differently. It is time we stopped considering ourselves “great ones” – yet remembered that we are indeed worthy of serious military and technical cooperation on any international level. The author is convinced that the President and the Council for National Security and Defense have a very constructive approach to these issues, and believes that the already-planned joint programs will start off after the adoption of the National Defense Strategy, the Military Doctrine, and the appropriate program for the defense complex reforms.

We give particular thanks to the NATO Communication Office in Ukraine and the Center for Army, Conversion and Disarmament Studies, for supporting and facilitating this process.

advisor to the President of Ukraine,

Director of the National Institute of Strategic Studies,

academic of the National Academy of Sciences of Ukraine