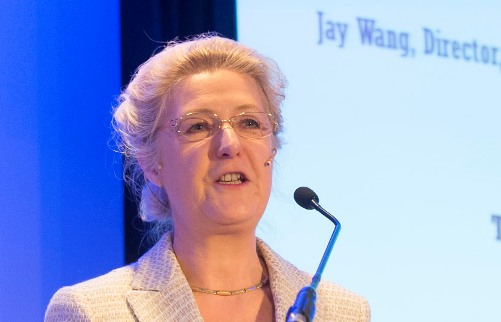 Excellences, ladies and gentlemen, dear colleagues and friends in Ukraine. I am very happy to join you on the occasion of this flagship event and equally happy to share with you some key observations on NATO’s recent summit in Warsaw.

Excellences, ladies and gentlemen, dear colleagues and friends in Ukraine.

I am very happy to join you on the occasion of this flagship event and equally happy to share with you some key observations on NATO’s recent summit in Warsaw.

As I am mindful of the old adage from the poet Shelly quipping in relation to his fellow poet Lord Byron that “he has lost the art of communication but unfortunately not the habit of public speaking” – I shall be concise and seek to give you the broader picture.

To set the scene: Responding to Evolving Challenges

One thing NATO has done well over the decades is change with the times – and the challenges. We’ve been able to reinvent ourselves and our strategies to reflect changing circumstances

The Warsaw Summit like the previous summit in Wales took place amidst a fundamentally changed security environment.

With its illegal annexation of Crimea, Russia tore up the international rulebook and challenged our post-Cold War vision of a Europe whole, free and at peace. 2014 stands out as a watershed year.

Two years later, we face continued Russian aggression in Eastern Ukraine, and an ongoing, unprovoked military build-up from the Barents Sea to the Baltic, and from the Black Sea to the eastern Mediterranean.

Terrorism and turmoil across Middle East and North Africa didn’t begin in 2014.  But that year witnessed a step change – for the worse – with the emergence of the so-called Islamic State or Daesh, and its declared ambition to establish a caliphate, beginning in Iraq and Syria.

The effects have been the further escalation of the civil war in Syria, and a worsening of the arc of crisis across the Middle East and North Africa, with direct consequences for our own security in the form of brutal terrorist attacks – including Istanbul, Orlando, Brussels and Paris – and the biggest migrant and refugee crisis in Europe since World War II.

In addition to these major challenges to the East and South, we face longstanding threats such as cyber-attacks, nuclear proliferation and long-range ballistic missiles.

As the world changes, NATO must continue to adapt – and Warsaw was fundamentally about adaptation and change.

The Wales Summit in September 2014 was NATO’s immediate response to these evolving security challenges.

Following Wales, we have delivered the biggest reinforcement of our collective defence in a generation. A few concrete examples:

Warsaw Summit approved our strategy for the longer term, based on recognition that these challenges will be with us for a long time to come.

Two overarching themes of the summit will determine NATO’s direction for many years:

Both are long-term policies that will require determination and persistence in implementation.

Let me map out each briefly:

To protect our nations by strengthening collective defence and deterrence:

We have agreed on an Enhanced Forward Presence: that means a NATO deployment, by rotation, of a robust, multinational battalion in each of most exposed countries in North East – Estonia, Latvia, Lithuania and Poland – and bolster posture in South East. This will make it clear that an attack against one Ally will be met by forces from across the Alliance.

Allies committed to boosting their resilience, improving civil preparedness, and ensuring we have the right mix of capabilities to meet new challenges, including hybrid warfare.

Cyber Security: We recognised cyberspace as a new operational domain, joining land, air and sea. And Allies pledged to strengthen their own cyber defences, and share more information and best practices.

Relations with Russia: they have been high on agenda in Warsaw. We pursue a two-track policy: defence and dialogue. NATO does not seek confrontation. Everything we do is defensive, proportionate, and in line with our international commitments.

To project stability beyond our borders – east and south:

We will step up support for partners in our neighbourhood. If our partners are more stable, we are more secure. This means doing more to help our partners provide for their own security, build resilience against outside pressure, and fight terrorism.

All 28 NATO Allies are contributing to the US-led Global Coalition to Counter ISIL. At Warsaw Summit, we decided that NATO AWACS aircraft will provide direct support to this Coalition.

We also agreed to expand our current training and capacity building programs for Iraqi military officers into Iraq. We will continue enhancing our cooperation with Jordan and our preparations to assist Libya, if requested. And we will sustain our long-term commitment to train, advise and assist the Afghan security forces.

In addition, NATO will provide more support to Georgia, to continue to assist the Republic of Moldova and to enhance support to Ukraine.

For Ukraine, Heads of State and Government of the NATO-Ukraine Commission endorsed the comprehensive Assistance Package for Ukraine. This is a significant package to support Ukraine in its reform efforts. To make your country more resilient and able to better provide for your own security.

We will also deepen our engagement with partners in the Black and Baltic Sea regions, and in the Western Balkans. We will also maintain our important operation in Kosovo.

Security and stability will be enhanced through greater cooperation between NATO and the European Union. It will take time before we know the full consequences of the United Kingdom’s decision to leave the EU, but we know this: the UK remains a staunch NATO ally and NATO-EU cooperation has become even more important.

So we are taking our cooperation to the whole new level. NATO and the EU will enhance civil preparedness, boost cyber defense capabilities and address broader maritime security issues in the central Mediterranean –– building on NATO’s cooperation with the EU to cut lines of international human smuggling in the Aegean. Goals include countering trafficking and terrorism, upholding freedom of navigation, and contributing to regional capacity building.

The security we need:  Defence Spending Pledge and Progress

Modern challenges require a modern Alliance. And they require the right resources.

The Warsaw Summit reviewed and reconfirmed the Defence Investment Pledge made at the Wales Summit.

2015 was the first year in many with a small increase in defence spending. Estimates for 2016 show a further increase of 3% across European Allies and Canada. This amounts to $8 billion US dollars in extra defence spending.

We still have a long way to go. We need to keep up the momentum. But we have turned an important corner.

Our 67-year history has taught us the importance of evolving as the threats evolve.

But some things haven’t changed – nor should they. Like our unbreakable bond between Europe and North America, our commitment to defend each other from attack – under Article 5 of our treaty – and our dedication to our fundamental values: democracy, individual liberty, human rights and the rule of law. These are NATO’s enduring values that keep us united and strong.

And we stand firm in our political and practical support to Ukraine.

We have again underpinned that an “independent, sovereign and stable Ukraine, firmly committed to democracy and the rule of law is key to Euro-Atlantic security.”

We stand united in our support for Ukraine’s sovereignty, territorial integrity and its inherent right to decide its own future and foreign policy course free from outside interference.

We stand by you!

Thank you for your interest.

Conference between NIDC and the Centre for Army, conversion and disarmament studies