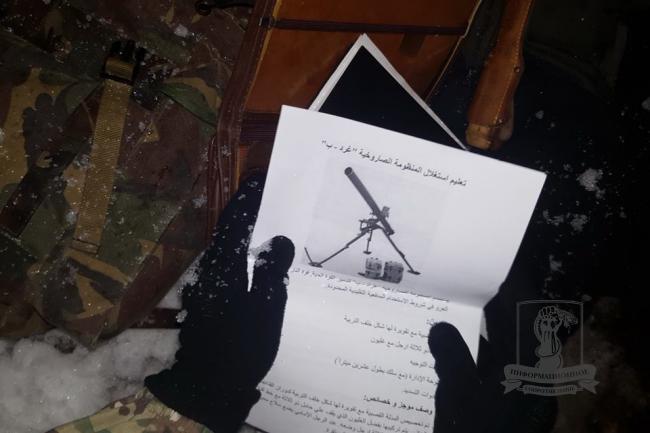 More evidence of direct links between Russia and Islamic State have been discovered. The coordinator of the Information Resistance (IR) online activist group reported that a pro-Russian militants’ truck that got hit with an IED was transporting 9P132 Grad-P Partizan man portable rocket launchers with manuals in Arabic (all photos by IR).

It is reported that the truck was moving without any additional security measures in the opposite direction from the frontline, toward the border between the Ukrainian Donetsk region and Rostov region of the Russian Federation, the segment within the militant-controlled area of Donbas. The IR report hints that the weapons were produced in the breakaway areas of Donbas and might be intended for shipment to Syria via Rostov Oblast and Russian-annexed Crimea. Now it becomes obvious that the weapon is manufactured in Russian-occupied areas of Donbas.

Interestingly, the weapon systems come with Arabic-language instructions. This gives reason to believe that the weapons are intended for IS militants commanded by Soviet and Russian-trained Saddam’s army generals.

As the Center for Army, Conversion and Disarmament Studies (Kyiv, Ukraine) earlier reported, production of Grad-P launchers was set up, with aid from Russian engineers, at a facility owned by PJSC Komsomolske Ore Mine Administration based in Komsomolske, Starobeshev District of the terrorist occupied part of east Ukraine.

Azeri media reported before that Islamic State fired rockets at the Turkish Bashiqa military camp in Iraq’s northern Mosul province. Turkey’s general staff said in a statement that Katyusha type projectiles fell into the camp. Grad-P, otherwise known as Partizan, is a light portable rocket system developed in the middle of the 1960s for North Vietnamese forces at war with the US. The system can engage targets such as enemy troops, weapons installations and vehicles in locations unsuitable for artillery deployment. Production was launched in 1965, and exports started in the spring of 1966. The 9P132 Grad-P man-portable rocket launcher system was previously manufactured by Kovrov Mechanical Plant, Russia.