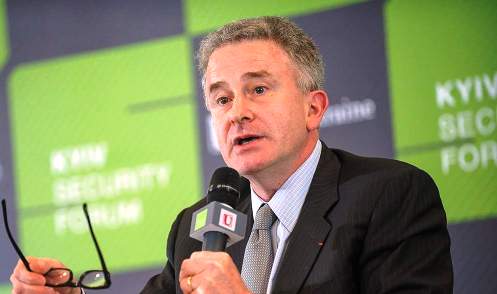 Russia’s information warfare is multifold, and so must be the answer of the West. First of all, we must debunk the lies, rectify the facts, resist the assaults of the so-called trolls, and identify the numerous sources of influence that Russia is deploying in the Western countries. Of course, we all know Russia Today (RT) and Sputnik, but there are many others most insidious media which are not labeling as Russian. Then, Kremlin’s propaganda, which is spreading out through media, is not the only one. Russia also appoints politicians, scholars, and consultants, who are advocating Putin’s Russia claims, and repeating key items of its propaganda.

Russia’s information warfare is multifold, and so must be the answer of the West. First of all, we must debunk the lies, rectify the facts, resist the assaults of the so-called trolls, and identify the numerous sources of influence that Russia is deploying in the Western countries. Of course, we all know Russia Today (RT) and Sputnik, but there are many others most insidious media which are not labeling as Russian. Then, Kremlin’s propaganda, which is spreading out through media, is not the only one. Russia also appoints politicians, scholars, and consultants, who are advocating Putin’s Russia claims, and repeating key items of its propaganda.

And there are also those we usually call the “useful idiots” who, sometimes spontaneously, promote Kremlin’s stances. In a way, the most dangerous element of this information war doesn’t lie in hard and tough speeches –on Ukrainian Nazis, democratic Russia, CIA and Mossad conspiracy, etc.? that do not influence that much a broad audience. Far more perverse are the softer arguments and lies, such as “Russia is West’s best ally in the war against terrorism” or “there was an aggressive behavior from the U.S. and NATO against Russia”. The discourse of an alleged humiliation of Russia is far more invasive and destructive. Let’s also mention the “realistic” argument: Russia is a too big power to ignore, and do we like it or not, we should engage with Russia. This argument just intends to rehabilitate Kremlin and to neglect its violations of human rights at home and abroad. This kind of “realism” –in my view it is not truly realistic? is undermining Europe’s security.

We all know that many far right politicians are cozying up to Putin, and so do the Euro-skeptics and the radical left. But in many countries, including France, some conservatives and even socialists are lenient with respect to Russia’s position, to say the least, and for instance are asking to lift sanctions against Russia. Quite often they are the same who are turning blind eyes on the genocide perpetrated by Assad in Syria –and of course Russia’s aggression against Ukraine. Unlike the far right politicians, they are apparently not opposed to democratic and liberal values; but in fact they truly are. They have no concern for the claims for liberty and human rights, and aren’t genuinely Europe-minded. They have a fascination for the strongmen. Unfortunately, the liberal politicians from both the right and the left sides of the political spectrum are not debunking their contradictions and lies. They are bringing most of the time no answer to those stances directly opposed to the basic European values

The EU and the West must not only answer: they must be at their turn the agenda setter. What does it concretely mean? More often, the European leaders, while confronting Russia’s propaganda, are not promoting the European values, denouncing Russia’s aim at dismantling Europe. They are talking about economics, not about geopolitics and principles. They are not enough showing why the European model is a valuable one that is worth defending and promoting. And it could also explain why Putin’s propaganda is unfortunately working.

Lessons for Ukraine and the EU after Dutch referendum

For Ukraine, the Dutch referendum pointed up the necessity for its government, civil groups, and intellectuals to better advocate its case on the European stage. Sadly enough, too many people in Europe do not know about Ukraine and what happened in Maidan –the first time people lost their life for the sake of European values. It was an admirable example for the apathetic “old Europe”. Basically, European people and Ukrainians have to be faithful to those values and to the legacy of the fallen. Now, it’s urgent to better communicate on Ukraine’s reality, claim and successes, without also hiding the major challenges that remain.

On the European level, I think that we need a kind of “Ukrainian caucus”, gathering people from all European countries advocating Ukraine’s case. Of course, it cannot be inspired and fashioned only by the Ukrainian government. There are in Europe many ordinary citizens politicians, intellectuals, scholars, and opinion leaders who are convinced by this necessity. They know that the fate of Europe will be decided in Ukraine.

Is the settlement of conflicts in Donbas and Nagorno-Karabakh a really important task for French diplomacy?

France is one of the three leading members of the Minsk Group, and has a true concern for a sustainable settlement of the conflict between Armenia and Azerbaijan. But we all know that it will take time and the “who is right, who is wrong” question there is all but simple from both legal and democratic point of view. To say it frankly, I do not see any settlement in the years to come and the situation is likely to remain frozen.

When it comes to the Donbas, the situation is basically different. First of all, we all know who the aggressor was. Secondly, it is rather clear that France and Germany decided to launch the Minsk process mostly to stop a bloody war, to limit the number of the victims, and to gain time. A lot could be said on the Minsk II agreement, which is probably not that fair, but could be seen as the less bad compromise at that period of time. France’s and Germany’s initiative was maybe the only one conceivable process given the reality: neither the US nor the EU was willing to retaliate against Russia’s invasion and to deliver weapons to the Ukrainian army. Thirdly, I am pretty sure that neither Chancellor Merkel nor President Hollande had any illusion on the sustainability of the agreement. All the violations of Minsk agreements, on which Russia has an overwhelming responsibility, were fully predictable. We all know that without a durable truce, an international control of the elections on the areas controlled by the “separatists”, and a fair exchange of prisoners, the Minsk agreements are doomed to fail. Of course, Ukraine has to be irreproachable, and it will also better underline Russia’s failures. It will have also to engage a meaningful dialog with the politicians and groups in the Donbas region –and we also guess that the Separatists do not represent a majority. We have to debunk the myth of “Kyiv versus the East”. The international community has to impose fair and free elections and to denounce and punish the crackdown on human rights and civil liberties by Russia backed-separatists.

This is of course a huge responsibility for Germany and France, and for the Ukrainian government. The international community, namely the US and the EU, shall do everything in order for the Minsk agreements to be implemented. It will be a first step, but the perspectives remain today very gloomy and uncertain.

NICOLAS TENZER,
Chairman of the Paris-based Centre for Study and Research for Political Decision (CERAP), editor of the journal Le Banquet