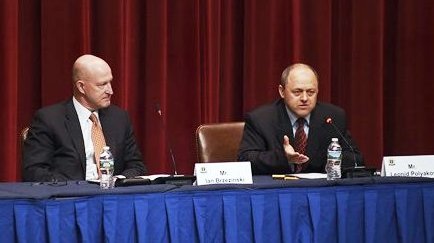 The purpose of the event is for the students to synthesize everything they learned during the trimester and apply that knowledge to a fictional problem. The course is designed to prepare future military and civilian leaders for high-level policy, command, and staff responsibilities requiring joint and service operational expertise and warfighting skills. (U.S. Navy photo by Petty Officer 2nd Class Jess Lewis/Released).

For the event, students applied educational concepts they learned throughout the trimester and examined potential solutions to the current situation in Ukraine.

The 221 JMO students, along with 49 international officers, 47 faculty members and subject matter experts, were divided into nine units to analyze actual events. The units then developed and presented possible solutions to a panel of regional experts.

“Our senior students are struggling to define what the U.S. military, in concert with the other government agencies, ought to do regarding the current conflict in Ukraine,” said Air Force Col. Adrian Schuettke, JMO professor and one of the capstone directors. “It’s a challenging task, since this contemporary conflict has evolved and changed even as the students were studying it.”

Students have spent much of the trimester researching various aspects of the conflict in the Ukraine in order to develop an understanding of the situation.

Combining that newly developed expertise and the problem-solving methodologies learned in the class, students were asked to create approaches to the current complex problems in Ukraine, including the annexation of the Crimean peninsula by Russia and other conflicts within the country in the areas of Donetsk and Luhansk.

“The biggest challenge for our group was the open-ended nature of the problem,” said Air Force Lt. Col. Jeremy Reeves, a student in one of the groups. “Coming from a military background where everything is well-structured, it was difficult to adopt an unbounded, abstract approach.”

“The capstone event illustrated the complexity of joint planning and the challenges civilian and military leaders face in defining problems similar to those we studied over the course of JMO,” said Heidi Hulst, a DoD civilian student who said the biggest challenge was framing the problem. “Because Ukraine is confronted with myriad short and long-range problems hinging on political, military, economic, social, infrastructure and information factors, all of which are exacerbated by Russian aggression, it was difficult to distill the problem.

“Even with many of the problem elements and conditions identified, it remained difficult to identify and scope the role European Command might play in supporting Ukraine in the future.”

The course has held this final exercise since 2011 and has applied its operational approach in the past to complex situations in countries such as Mexico, Nigeria, Vietnam, Myanmar and Syria.

The underlying purpose of the course is to develop military leaders for the future, one of NWC’s core missions.

“We run this style of exercise because JMO hopes to educate leaders who will think critically, see problems from many different aspects, encourage collaboration, and develop and communicate clear intent in response to ambiguous situations, ” said Schuettke.
The stated purposes of the capstone event are to synthesize problem-solving concepts in leading a multidisciplinary and multinational planning team; synthesize leadership skills necessary to sustain innovative and agile organizations in a joint environment; formulate theater strategic and operational objectives; revise planning processes to balance the competing objectives of the interagency effort; plan the integration and synchronization of information operations in joint operations; apply a design methodology for developing potential solutions to ill-structured problems; to promulgate plans and policies; and to assign responsibilities for planning.