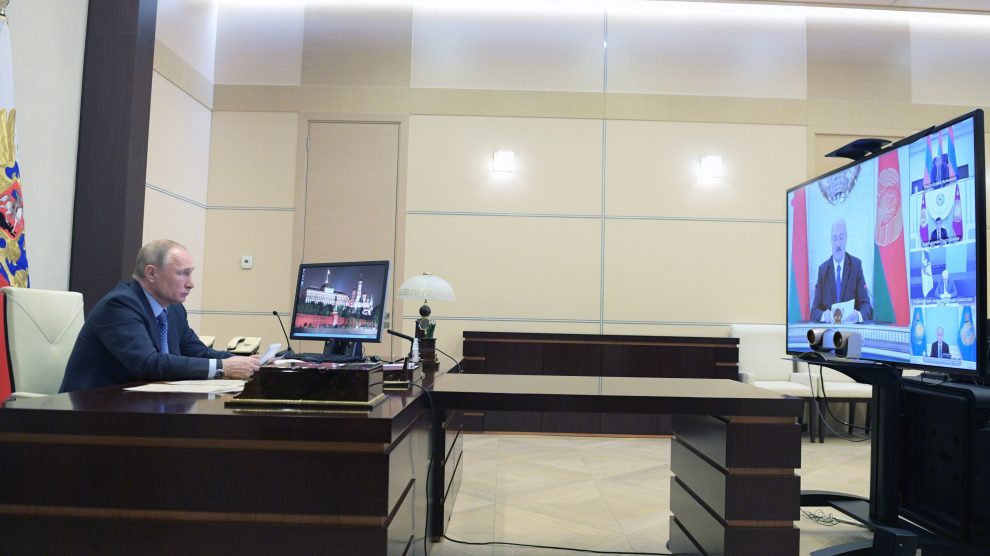 The meeting of the Supreme Eurasian Economic Council (WEEC), held on April 14, 2020, was unusual. First, because it was conducted in an emergency, which is now experienced by all members of the union in connection with the pandemic of the coronavirus, and secondly, because it was first conducted online, in videoconference mode, for the same reason.

Emergency situations in terms of both the magnitude of the spread of the virus and the consequences for the economy and the fate of humans are observed worldwide. Earlier, at the beginning of March объявленный The OECD is projecting a half-percent slowdown in the global economy's growth against the 2020 forecast, which had to be revised even worse. According to the Navy forecast April 14 is expected to see not only a slowdown in growth, but also a recession, unprecedented since the 30s - a 3% decline in world GDP. For different countries this decline predicted Fund experts are even larger, for example, in the USA - 5.9%, and in Russia - by 5.5%. Interestingly, the same decline is predicted for both countries, despite the fact that in the US the scale of the pandemic is many times greater than that in Russia. As of April 14, the United States registered more than 583 thousand infected with the virus, and in Russia - only 18.3 thousand. This speaks to the degree of strength of the two economies and their ability to withstand such shocks.

Of all the EEU member states, the situation is most dramatic in terms of epidemic spread in Russia. There, the rate of daily growth in the number of registered persons infected with the virus is still quite high and significantly higher than that currently experienced by Western Europe (in Spain and Italy - already within 2-3 percent). Thus, over the past few days, the growth rate in Russia has varied from 17 to 15 percent. Assuming that by the end of April, the growth rate of new patients will be at 14%, then the total number of infected will reach 1 by May 170, which is comparable to the current state of affairs in Italy, Spain, France and Germany.

In addition to the burden on public finances to provide medical services, financial support for the population sent for forced quarantine, and business, Russia is experiencing a sharp decline in hard currency revenues from oil and gas exports. Oil prices remain fairly low, $ 30 a barrel (Brent) as of April 14. This is despite agreement reached with OPEC to reduce oil production. For Russia, the quota is set at 8.5 million barrels per day. The fact is that while the supply of oil significantly exceeds demand.

Nevertheless, Russia's economic and financial position allows it to survive these shocks in the near future thanks to a half-trillion gold and currency reserve (564 billion dollars). From the perspective of the near future, the situation of Belarus is much worse: its foreign exchange reserves account for only about $ 7,8 billion. This is not enough for her for a long time, which is why Lukashenko has been vocal about the threats to economic stability in her country in recent days. In this situation, he hoped that the EAEU would expect that the trade barter and the corresponding mutual settlements between the countries, through the mechanisms of the Eurasian Stabilization and Development Fund, would allow to avoid settlements in hard currency. These wishes, of course, are illusory, since their implementation would lead to the collapse of mechanisms of market conditions, which would only undermine the stability and self-regulation of trade and economic relations. It is unlikely, say, that Kazakhstan, which relies more than Belarus on market mechanisms and on the deregulation of economic life, will go for this kind of barter. Moreover, Kazakhstan has more gold and currency reserves - 29 billion.

In his speech at the summit, Vladimir Putin tried to reassure partners that Moscow will make efforts to strengthen the union. He suggested developing measures to encourage mutual trade by further reducing trade duties, as well as enhancing the digitization of logistics and financial transactions. He also proposed measures to restrict exports to critical countries of critical goods, such as medicines and equipment, and certain types of food. Other countries are taking similar measures to protect the domestic demand for the most sought after commodities due to the pandemic, which raises some concern in the EEU countries, since not all of these goods are produced in the region but, if produced, mainly in Russia.

In this regard, I believe that despite the fact that the Russian Federation itself is experiencing the greatest economic shocks and, according to economists, it is unlikely to be able to remedy the situation even in 2021 (decline to 3.5%), as a whole, its leading position in the region, especially within the EAEU, is increasing. This leads to an increase in centrifugal trends in this union. At least, the economic dependence of Belarus and Kyrgyzstan on Russia is increasing, on its goodwill and willingness to play the role of donor. Such donor assistance will, of course, be provided, but in return for the manifestation of loyalty and willingness to give it more sovereignty.

Shanghai Cooperation Organization in a New Format of Geopolitical Realities