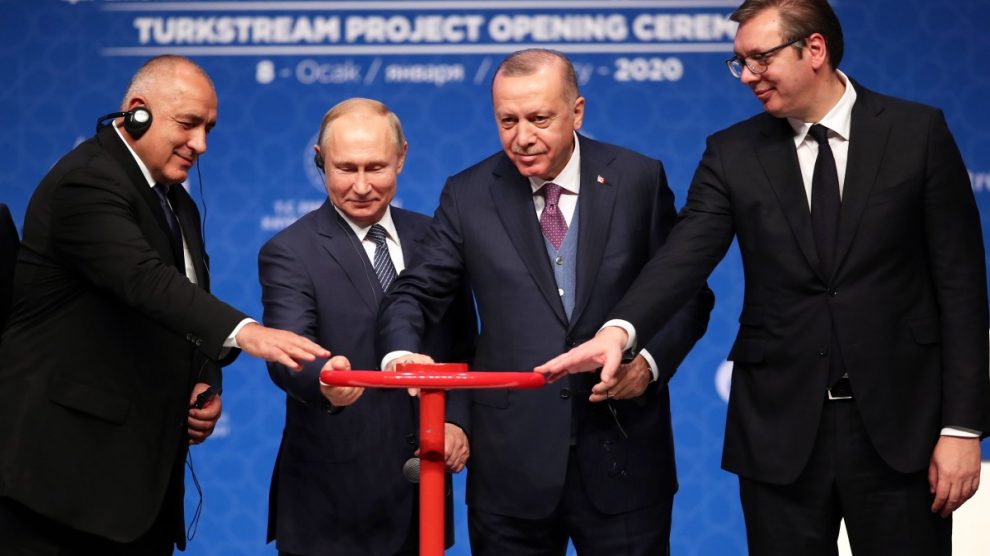 Exactly one week before the end of 2019, the builders of the Serbian section of the Turkish Stream 2 pipeline have put into the ground the last pipe of the Serbian segment of the pipeline, which is 403 km long and runs from the Bulgarian-Serbian to the Serbian-Hungarian border. After completing the works remaining on the route through Serbia - construction of technical facilities, metering, treatment and pumping stations, which will take several weeks - the country will be ready to receive the first deliveries of Russian gas via the new gas pipeline in May this year.

It will be ready, but it does not necessarily mean that it will receive, especially considering the current situation around the second branch of the Turkish Stream. Moreover, no one in Serbia - neither officials nor experts - today dares to say with certainty when the first Russian gas will go through the Serbian section of the pipeline. Instead, there are many who do not rule out the possibility that the pipeline will remain empty at all.

Perhaps skepticism of the latter is an explanation that the gasket in Serbia of the last pipe of the second branch of "Turkish Stream 2" passed without any celebrations and media presence. Interestingly, the very beginning of the implementation of "one of the strategically important projects for the future and development of Serbia" (as it was dubbed by Serbian Energy Minister Aleksandar Antic) was also carried out without special honors and attention from top officials.

The news about the event was announced on December 24 by the director of the state gas operator Srbijagas Dusan Bayatovic. He told reporters at a local government-owned RTS channel that Gastrans (a joint venture between Gazprom and Srbijagas) had completed the Turkish Stream 2 site in record time, and that all 100% of Turkish Stream 2 had been sold. In Belgrade, the pipeline is expected to provide the country with 8,7 million m³ of gas daily, or 3 billion m³ per year, which will be partly used domestically and exported to neighboring Bosnia and Herzegovina.

In this context, it should be noted that, like Energy Minister Aleksandar Antic, Dusan Bayatovic is a senior official of the Socialist Party of Serbia (SPS), whose leader, Ivica Dacic, is one of the Serbian favorites of Russian officials, including President Putin. He does not miss any opportunity to visit their company, thus demonstrating the peculiarity of personal relations with Moscow. After each of the last parliamentary elections in Serbia, Dacic made voyages to Moscow for instructions on who to form a coalition with (the PCA has always had the best negotiating position with the so-called third force on which the future configuration of the Serbian ruling Olympiad depended).

So if anyone knows the answer to the question of whether Russian gas will go to the new Serbian pipe, when it will be and in what quantity, then it will probably be people from the SPS. That is why the fact that while telling local media about the prospects of Turkish Stream 2, Bayatovich immediately pointed his finger at neighboring Bulgaria, where the new gas pipeline comes to Serbia, did not come to the attention of local experts.

The Bulgarian section of Turkish Stream 2 starts at the Bulgarian-Turkish border and follows to the compressor station near Provadiya, in the northeast of Bulgaria, and from there - a new pipeline 474 km long will extend to the Bulgarian-Serbian border. The Serbian section of the gas pipeline begins near Zajacar on the border with Bulgaria and crosses the Serbo-Hungarian border near Gorgos. The Hungarian section will have a length of only 15 km, but its construction has not actually begun yet. According to the statement of the local gas operator FGSZ, only a preliminary reservation of the transit capacity for the construction of the interconnector on the Hungarian-Serbian border has recently taken place.

The plans also include building a branch from Belgrade to Republika Srpska in Bosnia and Herzegovina.

This analysis of the construction of Turkish Stream 2 can be suspended, since at the end of last year, two factors were added to its history, which could significantly slow down or even stop its implementation.

The first is an agreement between Russia's Gazprom and Ukraine's Naftogaz to continue the transit of Russian gas through Ukraine. The second is US sanctions on companies and related entities involved in the construction of the Nord Stream-2 and Turkish Stream gas pipelines.

As for the former, Kiev and Moscow are far from reaching a long-lasting peace, but it is obvious that the Russian president - perhaps relying on the lack of political experience of Vladimir Zelensky - is trying to stabilize relations with Ukraine where possible, for example, in transit. of Russian gas through the Ukrainian GTS. If this is its political strategy, then the Ukrainian-Russian gas agreement means the continued use of this transit route for the long term.

It should also be borne in mind that the agreement, which envisages the transportation of gas through Ukraine in volumes of 65 billion m³ per year in 2020 and 40 billion m³ in the coming years, Moscow obviously counts on alternative routes that could be built during this period. If it, with the help of Berlin and Brussels, manages to defend the Nord Stream-2, then this year it will export 110 billion m³ of gas to Europe through two strands of the Nord Stream and 65 billion m³ through Ukraine, which is sufficient for continuation of gas supply to all participants of Turkish Stream-2.

As for the second factor, the construction of the Bulgarian section of Turkish Stream 2, or as it is called by the Bulgarian prime minister, the Balkan Stream, is carried out by the Saudi consortium Arcad, which will certainly take into account the consequences of US sanctions on this and several other projects. Unlike Germany, Bulgaria is unlikely to withstand US pressure. President Putin has already stabbed Sofia on this occasion, saying on December 4 in the presence of his Serbian counterpart, Alexander Vucic, who was on a visit to Moscow at the time, that she was "deliberately" delaying the construction of Turkish Stream 2 on its territory and that Moscow, if necessary, be able to find ways to circumvent it.

Despite such words of the Russian president, there is no real alternative to the Bulgarian route for Turkish Stream 2 today…

Theoretically, alternative options for exporting Russian gas to Europe bypassing Bulgaria could include the construction of a new pipeline from Turkey through Greece to Italy, or the use of the capacity of the future Trans-Adriatic Gas Pipeline (TAP), one of three gas pipelines in the pipeline. "Southern Gas Corridor" intended for transportation of Azerbaijani gas to Europe.

However, in the first case the obstacle is the relief conditions of Greece, which were among the main reasons for choosing the Bulgarian route.

In the second case, Gazprom has already stated that it wants to take advantage of the EU Gas Directive, which provides for the provision of capacity for a third party gas supplier in all European pipelines. However, the initial TAP capacity of 10 billion m³ is an exception to EU rules for 25 years, and when it is expanded to 20 billion m³ in the future, only half will be available to alternative suppliers. This again makes the Bulgarian route optimal for Gazprom. Energy policy is a key instrument of Russia's influence in Europe, and the Turkish Stream 2 pipeline is designed to consolidate Russia's energy hegemony in Eastern Europe and the Balkans. Serbia, however, is completely dependent on Moscow for the supply of natural gas. Its largest oil company, Naftna Industrija Srbije, is majority owned by Gazprom. At the same time, the attachment of the second branch of the Turkish Stream to the Bulgarian route, the situation around which, for the present, is not developing well for Moscow, indicates that in 2020 the pipes of the Serbian section of the Turkish Stream 2 are sufficient will probably remain empty.