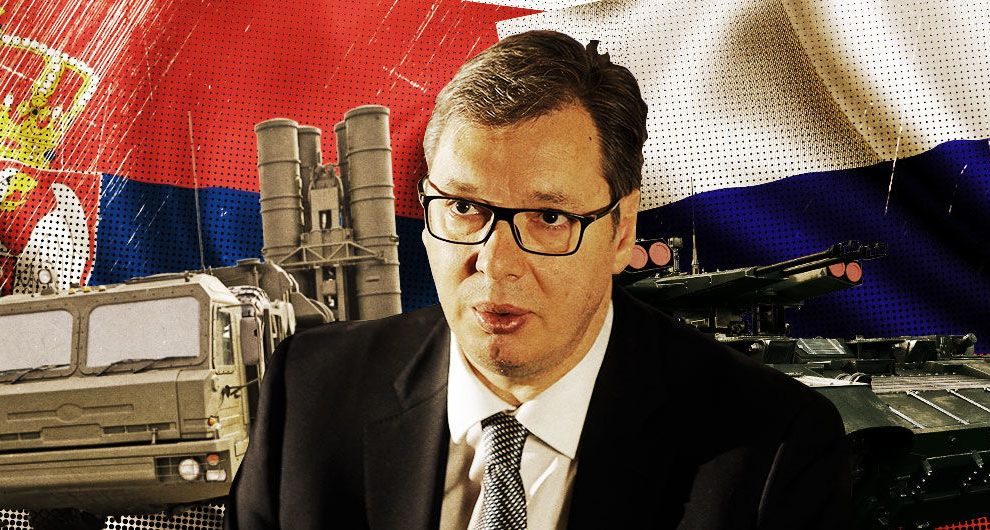 Recently, joint Russian-Serbian Slavic Shield exercises have been completed in Serbia, which, together with the agreement signed on the eve of the country's accession to the EAEU, give reason to say that Serbia, which until recently tried to maintain a balance between the West and Russia, more goes to meet strong Russian embrace, to choose from which it will then be extremely difficult.

The second half of last month was a pretty hot time for Russian-Serbian relations. 19-20 On October, Belgrade paid an official visit to Russian Prime Minister Dmitry Medvedev, where he attended celebrations marking the city's 75 anniversary of liberation in World War II, and held talks with the country's leadership. And on October 25, his Serbian counterpart, Ana Brnabic, traveled to Moscow to sign a free trade area agreement with the Eurasian Economic Union (EAEC) countries.

On the eve of the Russian voyage of the Prime Minister of Serbia, on October 24, the second phase of bilateral Russian-Serbian air defense exercises of the Slavic Shield units began on the territory of Serbia, which culminated in bilateral relations during that period.

It has become a tradition that any military action, be it military maneuvers or exhibition events, the Russian leadership pursues not only purely military goals, but also political and propaganda ones. The Slavic Shield training, the first stage of which took place in Russia in September, and the second - 24-29 in October in Serbia, were not an exception.

Thus, in addition to working out military issues, including the preparation of air defense units, in particular, their combat deployment, the airlift of long-range air defense systems and the deployment in new conditions, Moscow used this a military demonstration show for another demonstration of Brussels and Washington's strong influence on Belgrade, as well as the lack of intent to give them their last bastion in the Balkans.

Doing these exercises is useful for the Kremlin and so on. external propaganda, as they make it possible to show to the Serbian population, as well as from European friendly countries, that Moscow is reliable and decisive in protecting its partners. A good bonus was also the good advertising by participating in the training of Russian air defense complexes in front of potential buyers from India, Saudi Arabia and Egypt.

She actively used Russian-Serbian maneuvers and power in Belgrade for political purposes. First, the training was a great opportunity for her to demonstrate to the local population that the country's leadership has sustained support from Russia and that she is working hard not to repeat the events of 1999 this year. To enhance the effect, in the midst of the exercises, Serbian President Aleksandar Vucic said that Serbia had already deferred funds for the acquisition of one armor-shell complex.

Secondly, local media outlets used by Vucic to actively use training data in the interest of maintaining a high level of support for his Serbian Progressive Party (SPP). Given that parliamentary elections will take place in the spring in Serbia and the SPP is either pro-Russian or anti-Western, the Slavic Shield, for rating the Serbian president and his party, is a real gift.

In general, throughout the training, the Serbian editions were dominated by real euphoria. On their pages, there were active discussions about the possible transfer of Serbia's C-400 complexes, as well as what benefits it could bring to the country, hinting at the NATO bombing of 1999 year. Here are just a few of the headlines: "We are very strong: Serbian officers trained on C-400", "Russian slap in the West: panic in NATO over C-400 in Serbia!", "Slavic Shield Military Training" raised alarm at The West. The furthest went was one of the main mouthpieces of the Vucic propaganda - the Informant edition, which published an open appeal to Putin to leave at least one C-400 in Serbia after completing the exercises.

A rather interesting point about Russian-Serbian training is how Russian air defense complexes, which pose a direct threat to the Alliance, have been able to reach Serbia. As it turned out - through its territory.

There is no other way for Russia to transport its OVT to Serbia except through the Allies. Even more recent is the memory of a NATO member who banned Russian armored vehicles from moving to Serbia via the Danube this summer. Thereafter, Russia airlifted her through another NATO member, Hungary. The official Budapest then argued that the flight was civilian rather than military.

This time Russian planes flew over another NATO member, Bulgaria. According to Bulgarian media, the Russian aircraft An-124 has crossed Bulgaria's airspace at least 12 in the last three weeks. Bulgarian journalists' information is based on data from the flyradar24 website, and is different from the official report by the Bulgarian Foreign Ministry, namely that two planes flew 22 in October towards Belgrade and returned back to 30.

Refusing to allow the Russian Air Force to pass through its territory, the Romanian side argued in June that an EU embargo had been imposed on such transportations to the EU.

In an attempt to find out whether the actions of the Bulgarian leadership, which gave permission for the flight of Russian military cargo to Serbia, were legitimate, or whether it was a violation of the European embargo, Bulgarian journalists appealed to the European Commission. However, they were told that, without specifics, the implementation of EU sanctions is the responsibility of each Member State.

As for NATO, they were advised there to seek comments on Bulgaria's airspace with the Bulgarian authorities.

The latter is still silent, however, given how actively Russian energy projects are being promoted in Bulgaria, one of which is the Turkish Stream 2 pipeline, which puts NATO and EU members more dependent on Moscow - to guess what motives it has been driven by, when permitting a Russian military caravan to fly to Serbia, it is easy.

This case, like the one mentioned above with Hungary, shows well how skillfully Moscow uses NATO's "gaps" not only to place its military threat as close as possible to it, but also to show that the Alliance's unity today is nothing more than words.

Speculation around the C-400

There is still no official information on whether or not Russian air defense complexes have returned to Russia, which raises numerous speculations on the subject, as well as whether the Kremlin has any possibility of leaving them in Serbia (leaving the complexes under its control). On the one hand, there is talk that, despite Belgrade's desire to have such complexes in service with its army, it would be quite problematic for Belgrade to do so. an explanation of such a step before Brussels and Washington, especially given the declared and constantly emphasized neutrality. On the other hand, Russian media are spreading that the Serbian authorities are considering buying into the long-term loan of the C-400 system and that negotiations may be held between Belgrade and Moscow in the near future.

At first glance, the chances of arming the S-400 system, which is worth more than half of Serbia's military budget, are unarmed. However, given that today the geopolitical expediency of foreign economic projects in the Kremlin often outweighs the economic ones, it is entirely possible that the C-400 could not become a Serbian "military mortgage".

However, no matter how much information noise around the C-400 (no matter how much truth therein), it benefits both Moscow and Belgrade today. It gives the Kremlin the opportunity to intimidate the West, and Belgrade to play on the feelings of its electorate before the elections and feel more confident before the same West when negotiating a solution to the Kosovo issue.

All the noise around Serbia in the second half of October: both top-level meetings, accession to the EAEU, and the Slavic Shield fits in well with Russia's strategy to strengthen its main bastion in the Balkans, but at the same time raises considerable questions about the real Belgrade's intentions under its current leadership to integrate with the EU and what its relations with NATO are today.

It is obvious that President Uucic is trying to follow his Turkish counterpart, Erdogan, who is moving closer to Russia and demonstrating to the West his "strong will" and wants to make concessions in this way. However, for Vucic, who is still trying to follow the traditional principle of Yugoslav foreign policy - sitting on two chairs - such behavior can be quite risky. At least because Serbia does not have such economic and military potential as Turkey.

The consequence of open and unconcealed flirting with Moscow could be for Belgrade to spoil relations with Washington, with all the ensuing consequences, and even more delay in the date of the start of EU accession talks. Thus, there may be a vacuum in Serbia's relations with the West, which Russia will immediately fill. For the country, the main trading partner is the EU and which is surrounded by NATO on all sides is not the best scenario.