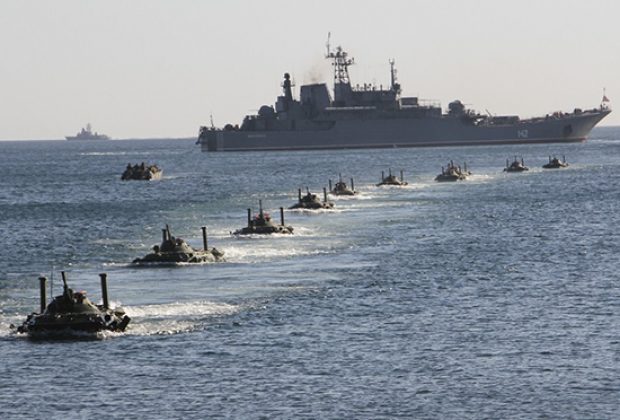 Recently, on June 29 of June 2019 in Bucharest (Romania) an international conference "Chaos and war on NATO's Eastern Frontier? Russian threats versus transatlantic links for Ukraine, Romania and Moldova in the times of Zelenski and Maia Sandu "(" Chaos or the war on the eastern border of NATO? Russian threats in the context of transatlantic ties between Ukraine, Romania and Moldova in the time of V. Zelensky and M .Sandu ") The event was organized by the Ţine de Noi Association (Romania) and the Center for Conflict Prevention and Early Warning (Romania). With the support of the Hanns Seidel Foundation (Germany)

Within the framework of the conference, the main topic for discussion was the issue of escalating tensions in the Black Sea region on the south-eastern flank of NATO due to the expansion of the combat capabilities of the Russian Federation in the Crimea and the Kremlin's implementation of the destabilization policy in the region.

The event involved Romanian and Moldovan politicians and experts from local communities and the media. The main speakers in the framework of the conference were: former Minister for Foreign Affairs of Romania Cristian Daiconescu, former National Security Advisor, General Sergiu Medar, Director for the Center for Conflict Prevention and Early Warning (Romania) Iulian Chifu ) former Minister of Defense of the Republic of Moldova Viorel Cibotaru, Head of the Tinede Noi Association, Economic Security Expert Ravzan Orasanu, Ambassador of Ukraine to Romania Alexander BANKOV, as well as Head of the Danube Sector, Central Editorial Board, Editor-in-Chief UDR Defense Express Anton Mihnenko.

Assessment of the participants' statements indicates that in general, the Romanian and Moldovan expert environment has almost the same understanding with the Ukrainian side of the current situation on the Black Sea. Everyone sees an increasing threat to the Russian Federation. At the same time, the Romanian side has already determined for itself that the Russian presence and its influence today are the phenomenon with which it will have to live for a long time in the future, and therefore should be constantly prepared for the escalation of tension. At the same time, Romania believes that NATO's leadership mistakenly pays more attention to security and defense in the Baltic States, rather than in the south-east of the bloc. The North-Western European direction for Russia is not the main one. Destabilizing the actions in the Baltic is a distracting maneuver for the Kremlin from its key strategic direction - the Black Sea. Therefore, focusing efforts in this region should be a priority.

Thus, General Sergiu Medar noted that the Russian Federation is seeking to establish control over the entire post-Soviet space, considering these territories as their "zone of influence". This poses a certain risk to NATO's eastern flank. "The Romanian side should understand that if Russia recognizes the US as a threat, then Romania, as a NATO member, is also a threat to the Kremlin's minds. For Moscow, the Alliance is a continuation of the US policy, and therefore the Romanians are an instrument of American policy in the region "- said the general. Recognizing the inevitability of the current situation and the impossibility of changing it, Bucharest must develop its own policy of constant readiness to respond to the challenges and threats posed by the Russian Federation. That is why strengthening interaction at the regional level for a powerful opposition to aggressive Russian policy is very important.
Sergiu Medar also noted that Russia's policy is focused on transforming the occupied Crimea not only into a fortress, but also at the center of coordination and implementation of hostilities in the Black Sea and Mediterranean regions. The main goal is the Balkans, because because of their destabilization the Kremlin wants to destabilize the whole of Europe. That is why the past few years there has been an increase in military presence on the Crimean peninsula, actions in Montenegro, active actions in Syria, which destabilize the general situation and endanger the European region.
At the same time, Sergiy Medar noted: "It should finally be understood in NATO that Russia's interest in the northern region is much less than in the southern part of the Black Sea. It is the southern direction that is key to Moscow, because it allows you to have access to the Mediterranean Sea, as well as the main southern transport corridors. With this in mind, Europe and NATO should be more prepared to defend their borders precisely in this region. "
Sergiu Medar also stressed that Romania is ready to defend its borders today. This confidence is supported by the fact that the Romanian side is well aware of the peculiarities of Soviet / Russian politics, as well as the fact that Bucharest once made the most important and correct step - joining NATO. In view of this, the reaction to the Kremlin's actions in the event of its immediate aggression will be instantaneous.

In turn, Julian KIFU, director of Center for Conflict Prevention and Early Warning (Romania), believes that the issue of escalation of tension comes not only from the militarization of the Crimea from the Russian side, but also by strengthening its position on the rest of the military bases in the Black Sea region. There is a general increase in military power. "There is an understanding that the RF would like to do - on the one hand, and on the other hand, - Romania is well aware that there are certain restrictions for Moscow, in particular financial ones. The Kremlin year after year due to the impact of sanctions and the world price of hydrocarbons is forced to reduce defense orders and finance defense programs. Today, it is already noticed that plans for the full equipping of troops with modern and upgraded weapons will not be implemented on time. "
Julian Kifu also fully supported Sergei Medar's position on priority for the Black Sea region of the Russian Federation than the Baltic. In particular, it indicates the presence of the largest number of unresolved frozen conflicts in the countries of the given region - the Republic of Moldova, Ukraine and Georgia. In addition, the Russian Federation is interested in spreading its influence on the Balkans, northern Africa and to be more powerfully represented in the Atlantic. According to Kifu, the Kremlin is aiming to do this. It is for this reason that the Alliance, in general, and, in particular, Romania, in particular, must develop their own policies based on the understanding of these processes, the inevitability of the Russian threat, and the need to recognize the constant readiness for confrontation with the Russian Federation.

In turn, Viorel Cibotaru stresses that the threat from Russia on the territory of Transnistria does not go away. The key risk of stability on the Dniester, which belongs to the Black Sea basin, is the OGRR and Transnistria troops. "At the same time, there is a certain dynamics of improvement of relations with the Russian Federation. The visit of the parliamentary delegation of Moldova, consisting of the representatives of the PCRM and ACUM to Russia, the speech of Speaker Zenai Hrybanny in the State Duma and the subsequent warm welcome, indicates no significant changes in the priority of Moldova's foreign policy. Of course, current power will balance on relations between the EU, the US and Russia based on their own interests, but it is obvious that relations with Moscow will become more dynamic and positive, "said Viorel Cibotaru. will feel "much more comfortable than before." So, in particular, some restrictions on rotation of personnel may be lifted, the possibility of improving trade relations between Transdniestria and the Russian Federation, as well as the restoration of the material and technical base and individual samples of military equipment will be lifted. In the end, this will lead to the fact that the group of Russian troops in the region will be significantly strengthened and will be able to conduct a variety of military operations under the overall plan of the military-political leadership of the Russian Federation. This means that not only Moldova, but also southern Ukraine fall into the risk zone.
At the same time, Viorel Cibotaru believes that in the near future, it is unlikely that anything will change in a positive context in the Republic of Moldova, since there are no concrete actions regarding the development and adoption of strategic documents in the country by the new government - the coalition of the PPPM and the ACUM. Today, the dismantling of the oligarchic system, which existed for a long time, only takes place.

In turn, Anton Mikhnenko questioned the "atmosphere of stability" on the NATO Eastern Channel in the next 5 years. "First of all, this is due to Russia's deliberate militarization of the occupied Crimea and some territories of Donetsk and Lugansk regions. The Russian Federation militarized Crimea and Donbass. At the same time, the "fortress" created from the peninsula is capable of destabilizing the situation not only in the Black Sea region, but also in the Mediterranean. Ukrainian experts are convinced that Moscow has far-sighted plans, aimed at spreading its own influence. By the occupation of the Crimea, with the restriction of shipping in the Kerch Strait, the next possible step is the restriction of navigation in the Eastern Black Sea region, where the threat may be the threat of a mythical "terrorist act" on the trapped "Boyka Gardens" located in that region. Secondly, which also affects stability in the region, is an internal political situation in the Republic of Moldova and in Ukraine. For example, Moldova. It is understandable that Russia gave way in a separate battle for Chisinau, contributing to finding a compromise between the pro-Russian PSDM and the pro-European ACUM bloc. However, the Kremlin has plans for the future - the next extraordinary parliamentary elections, where socialists, who do not currently run the government of the country, may somewhat gain votes from the Moldovan electorate, who do not like the current policy of ACUM. So the main pitfalls are still ahead "- said Anton Mikhnenko. According to the expert, for Ukraine particular fears in the situation in the Republic of Moldova are causing an increase in Russian influence in the country and its possible federalization. "Ukrainian experts believe that the possible federalization of Moldova, the Kremlin will try to demonstrate to the world community, as an example of a solution to frozen conflicts, and will try to impose it on Ukraine to resolve the situation on the Donbass," Mikhnenko said.

In fact, the Romanian and Moldovan expert environment is unanimous in the fact that it is unlikely that peace and stability in the Black Sea is expected in the near future. The security risks caused by the militarization of Crimea and the aggressive policy of the Russian Federation in the region will only grow. Therefore, focusing efforts in this direction, first of all on the part of the Black Sea region countries, as well as NATO, should become a priority in its further policy of its own.

Business Innovation: The Most Effective Techniques and Tools for Empowering AI