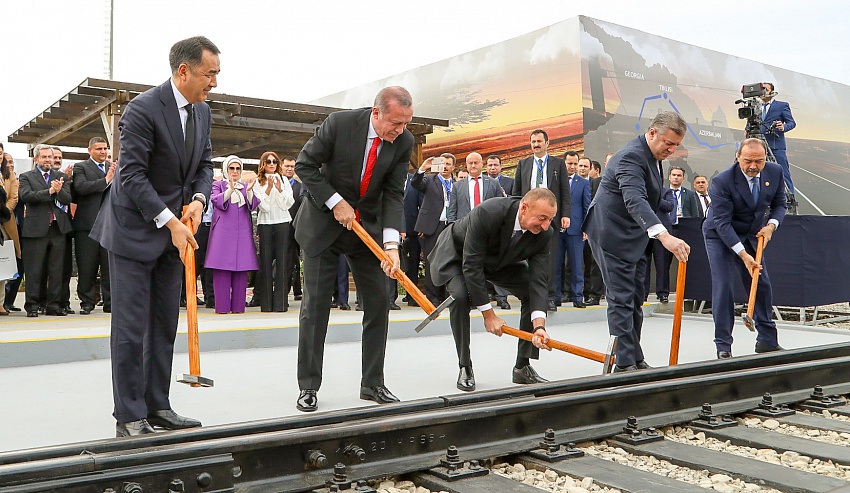 07 May of this year In Ankara, heads of railway companies of Russia, Turkey and Azerbaijan signed a memorandum on the development of rail transport within the framework of the Baku-Tbilisi-Kars (BTK) highway. Russia, in fact, has joined this project.

In my opinion, there are several explanations for such a development of events.

About two years ago, the talks intensified on the fact that Russia through Abkhazia and so-called South Ossetia wanted to join the railroad post in order to supply its goods, both to Turkey and Armenia. This project was raised at the level of negotiations between the special envoy of the Prime Minister of Georgia on relations with the Russian Federation Zurab Abashidze and the Deputy Foreign Minister of the Russian Federation Grigory Karasin (Karasin-Abashidze format). But during the talks, the parties failed to come up with any concrete solution to the issue. Today, it's clear to all parties that such a project is not indefinite. Tbilisi is a critical topic for Abkhazia and South Ossetia (Georgia occupied by Russia - CIACR-South Caucasus) Tbilisi plans to increase cooperation with NATO, conduct military exercises and so on. Plus, there are suspicions in the Kremlin that Georgia has refused to cooperate in this matter under the pressure of the West. Against this backdrop, it seems that this transport project is withdrawn from the negotiating agenda of Tbilisi and Moscow. This is one of the reasons for Russia joining the BTK.

The economic factor of the loading of the highway is obvious. Further, in these conditions the role of Azerbaijan as a communicator between Russia and Turkey is increasing. The format of BTK with Russia can ensure its long-term and reduce its vulnerability to external influences. Also, the indicated format on a political plane can serve as an additional factor of stability in the South Caucasus - according to the logic of Ankara, Moscow and Azerbaijan.

At the same time, we note that there will be very intense competition in the transportation and logistics market. We are witnessing the emergence of new transport corridors in the South Caucasus region. The United States, for example, lobbies for the development of the "Lazurit Corridor" - from Afghanistan to Europe through the South Caucasus, in which Turkey and Turkmenistan are also actively involved.

It was a certain confrontational moment that the memorandum in Ankara was signed without Georgia. In light of the completion of a single track to the Kars station, Tbilisi loses logistical dividends (a transfer station in Akhalkalaki). Prime Minister Mamuka Bakhtadze has already said that the change of format without Tbilisi is impossible, as well as the accession of new participants without the consent of the three parties.

Georgia in the BTK project plays a transit role, and I would not have been looking for a conspiracy here that someone has put somebody in front of the fact, and so on. Therefore, such statements will not have a practical effect on the signed format, they are oriented, rather, to the internal Georgian territory. Georgia as a transit country will have its own dividends from an increase in cargo flow.

Of course, the expansion of the BTK at the expense of Russia was the decision of Ankara and Moscow. Turkey in no way wants to interrupt its railway connection with Russia. Azerbaijan, also fulfilling the transit role, considered such a format the most optimal for all project participants. No matter what pressure there is, this is not going to happen, but rather on increasing the level of confidence on the part of the Russian Federation and Turkey.

And I do not think that the specified format of the BTK can somehow spoil the relations between Tbilisi and Baku. There is no point in this. Georgia will not spoil relations with its main economic partners - Turkey and Azerbaijan. Tbilisis will not go into any exacerbation. It is the Turks who are the largest investor in Georgia, and Azerbaijan is the main supplier of energy resources to Georgia, the Azerbaijani gas supplies the population and the industrial sector of Georgia, the Georgian budget receives revenues from the transit of Azerbaijani oil and gas in its territory.

Of course, such a format of BTK - Russia's participation in a project in which the main violin is played by Turkey and Azerbaijan, does not meet the interests of Armenia. I do not rule out that Yerevan can claim Tbilisi just on the launch (not launching) of the highway through the occupied territories of Abkhazia and so on. South Ossetia. But there are no leverage on Armenia's BTC.

In the future, with the BTK conjugation with the initiative "One belt, one way", Azerbaijan in this case becomes a country hub. This gives you additional security guarantees, including in terms of solving the Karabakh problem peacefully. Azerbaijan has significant oil reserves, and Turkey can assume responsibility for delivering them to the Middle East, which will geostrategically strengthen Azerbaijan, its position in the South Caucasus, and so on.

As for the position of different centers of power, for example, Beijing through the territory of Russia has two corridors. The first is the railway through Kazakhstan to Russia and Belarus. The second is the road through Azerbaijan and Turkey. The second highway is not a priority for China. Although I would not rule out the future accession of the People's Republic of China to the BTK project, it is able to provide around 5% of Chinese goods to Europe.

Russia, and not Turkey, wins the BTC project to a greater degree. This is transportation of timber from Siberia and oil.

Turkey sees BTK as one of the elements of the formation of a prospect of its own ambitious project, using its successful geostrategic location in the world between Africa, Europe and Asia. This is now on Ankara's agenda. After all, the question of joining the European Union for Ankara is practically lifted, while its position in Asia and Africa is growing at the same time. Ankara can regulate the delivery of European goods to Central Asia, and from Central Asia to Europe, Africa, etc. Turkey should become a self-sufficient world power center. It is not against anyone, but for stability in different regions of the world - the Middle East, Central Asia, the Balkans, North Africa, and so on.