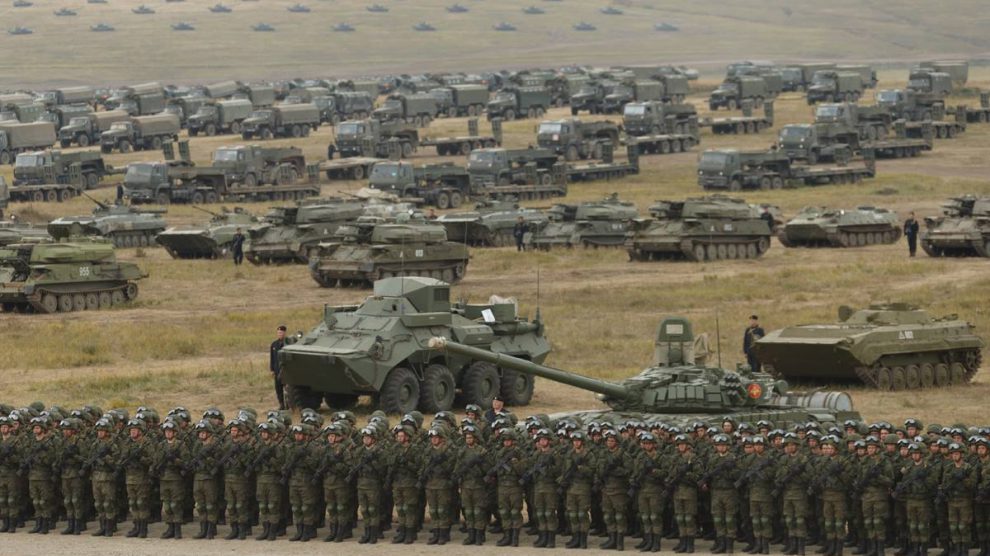 The CACDS experts have analyzed and come to a number of conclusions regarding the real purpose of the “Vostok-2018” exercise and possible threats to Ukraine.

The CACDS experts have analyzed and come to a number of conclusions regarding the real purpose of the “Vostok-2018” exercise and possible threats to Ukraine:

–         The main message about the Russian army combat capability and the ability to lead a long-term and large-scale conflict was directed not to the American or Japanese audience, but to the military-political leadership of China. That is why the combined arms and ground aviation polygons, in which the active phase of the training was held, were selected very close to the land borders with the People’s Republic of China. The Russian media actively promoted the thesis of the Russian army high expeditionary capabilities, which if necessary can be transferred with the required number of troops to the Far East in the shortest possible time. For the same purpose, it was announced about the virtual 300,000 servicemen allegedly involved in the military exercise. Thousands of Russian military equipment (which were specially transferred from the western regions of Russia), were intended to demonstrate to the Chinese military leadership the image of the well-equipped and improved Russian army during the parade at Tsugol landfill.

–         One more confirmation of the anti-Chinese component at “Vostok-2018” is the first transfer of the short-range ballistic missiles “Iskander-M” from the Russian Federation Central Military District to Kyrgyzstan for participation in joint antiterrorism trainings of the power structures that are called the “Issyk-Kul-Antiterror-2018”. During the exercises, from September 24 to 26, missile strikes on objects of terrorist groups located in the Xinjiang Uyghur Autonomous Region of the People’s Republic of China, which borders with Kyrgyzstan, will be probably practiced. There is a threat of Uighur separatism in this area that is why the conduction of the “Issyk-Kul-Antiterror-2018” trainings may indicate Russia’s preparation for the negative scenarios development of the situation in this region of China.

–         Other tasks (in relation to messages for the United States and Japan, attempts to create the visibility of the so-called military-political alliance with China in front of the internal and external audiences, checking the combat readiness and combat capability of The Armed Forces of the Russian Federation etc.), of course, take place, but they are not basic.

–         Russia’s demonstration of its military capabilities to the Chinese leadership shows the lack of mutual trust and friendship, the illusion of which the Russian authorities are trying to create. The so-called high level of political cooperation between the Russian Federation and the People’s Republic of China is artificial. However, now it has no basis other than confrontation with the United States and bilateral military-technical cooperation between Russia and China on selected arms. The People’s Republic of China is practically independent of Russia economically and energetically. The Chinese Belt and Road Initiative gradually displaces the Russian Federation from Central Asia and Africa. In addition, Chinese companies actively use Western anti-Russian sanctions to sign contracts with Russia on terms that are more favorable. At the same time, both Russian and Chinese media broadcast propaganda material on so-called strategic partnership that is significantly different from reality.

–         In spite of a direct military threat absence to Ukraine from the “Vostok-2018” military exercise, some aspects have an indirect threat and should be taken into account by the Ukrainian leadership. Under the guise of maneuvers, a large-scale troops and armaments rearrangement between the units stationed in the western and eastern parts of the Russian Federation was carried out. As a result, a significant number of armored vehicles and MLRSs (multiple launch rocket system) were transferred to the borders with Ukraine. It threatens to increase the combat and numerical strength of the Russian occupation troops in the Donbass. Among other things, the trains of T-62 tanks were relocated from the Eastern Military District of the Russian Federation to the borders with Ukraine that could become a part of the so-called “1 and 2 army corps Donetsk and Lugansk People’s Republic “.