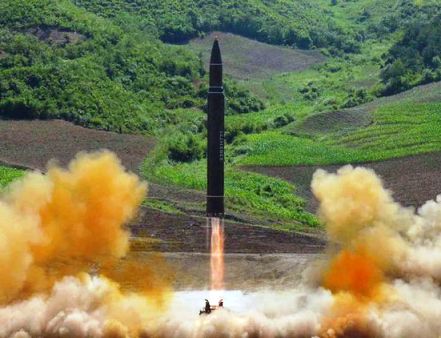 ... Moreover, this “rocket-engine scandal” reminds of a notorious “Kolchuga scandal”, which at its time had a powerful impact on the development of domestic situation in Ukraine, as well as on the Ukrainian-American relations...

According to the experts’ evaluation of The Center for Army, Conversion and Disarmament Studies, The article in The New York Times “North Korea’s Missile Success Is Linked to Ukrainian Plant, Investigators Say” published on August 14, has the signs of purposeful information attack on Ukraine. Moreover, this “rocket-engine scandal” reminds of a notorious “Kolchuga scandal”, which at its time had a powerful impact on the development of domestic situation in Ukraine, as well as on the Ukrainian-American relations.

The CACDS pays attention to the following details of the publication in The New York Times:

– The article does not contain any fact, evidence or references to witnesses or participants of this “deal” between Ukraine and North Korea – only assumptions, conjectures, fibs and manipulative assessments. If such a “deal” really had happened, the transfer of such sensitive and large-scale “goods” as the top-secret rocket engines should have left a lot of traces: money transfers, financial documents, intermediaries, offshore and shipping companies, ships, which transported the engines etc. All this can not be hidden in the modern world, especially when it comes to the contacts with North Korea, which are controlled by all the leading intelligence services in the world. However, the article and the research do not contain even hints at actual evidences.

– For some unknown reasons the authors of the article and the research reject the involvement of Russia and China in the possible transfer of missile technology to the North Korea and peremptory point to Ukraine. At the same time, they use such not so inherent for the serious researches wording, as “How the Russian-designed engines, called the RD-250, got to North Korea is still a mystery”.

– The authors of the article and the research create almost apocalyptic picture of modern Ukraine: “post-revolutionary” country in chaos, with destroyed economy, where the rocket plant in the city of Dnipro, which thrived during the Soviet era and friendship with Russia, is now suffering from a lack of contracts (which once had been ensured by Russia). Because of this, local engineers literally are ready to sell for food technologies, secrets, and often entire rocket engines to any thief, including North Korea, which is under the direct UN embargo. The described situation bears a strong resemblance to the scenario of the Russian TV propaganda program and can not claim for serious research or journalistic investigation. “The factory is underused, awash in unpaid bills and low morale… Dnipro has been called the world’s fastest-shrinking city … The emerging clues suggest not only new threats from North Korea, analysts say, but new dangers of global missile proliferation because the Ukrainian factory remains financially beleaguered …” – isn’t this the set of phrases from Kiselyov’s (the key russian propagandist) program?

– Based on the above, it seems that the authors conclude that the main motive for Ukrainian engineers to carry out the transfer of rocket engines to North Korea was money that would allow them to buy a little food and not die from starvation. However, perhaps Ukrainian engineers were pleased with a few kilograms of choice North Korean rice? The CACDS experts hope that the authors of the article and the research will be able to obtain factual information at least in this regard.

Also when analyzing this article, another detail has to be considered. From 1995 to 2001, Michael Elleman led Cooperative Threat Reduction program in Russia, aimed at dismantling obsolete long-range missiles. In addition to the assumptions that in this period he could be the target of Russian secret services, this also points to the fact that Mr. Elleman is well-informed about the situation with rocket engines RD-250 in the post-Soviet space, especially about the fact that, unlike Ukraine, Russia possess a significant number of engines and their individual elements. And this is Russian territory from where these engines can easily be transported to the North Korean laboratories.

In general, experts of The CACDS conclude that publication of the article in The New York Times “North Korea’s Missile Success Is Linked to Ukrainian Plant, Investigators Say” can be part of the Russian special services’ planned information campaign against Ukraine, the main tasks of which are the following:

– Creating the conditions for Russia to cover its own deliveries of missile technologies to the North Korea with a shift of the attention of Western special services and experts to Ukraine;

– Preventing the formation of new level of relations between Ukraine and the United States, which started forming after the visit of Ukrainian President to Washington and the start of work in Ukraine the Special Representative Kurt Volker.

– Disruption of process of preparing a decision by the US Administration to transfer lethal weapons to Ukraine – the process can be delayed indefinitely, until the end of the investigation of the assumptions, made in the article.

– Formation the conditions for collapse of the international coalition of  Ukraine’s support and, as a result, lifting sanctions on Russia for Crimea and Donbas (because how can one support a country that supplies rocket technology to an odious regime that is threatening the United States and its allies with nuclear destruction?)

It is possible that the Russian special services, by planning the “rocket engines from Ukraine” information operation hoped to achieve the effect of “Kolchuga scandal” when, due to published in the press assumptions of Ukraine’s supplies of Kolchuga radar to Iraq, a powerful blow on the state leadership of Ukraine, as well as on international image of Ukraine was made. Moreover, the vector of the internal and external development of our state had changed – though, the fact of deliveries of the Ukrainian Kolchugas to Baghdad has never been proved in the future. The similar algorithm can be played out and in this case: the US leadership will be informed that Ukraine has supplied North Korea with rocket engines, which has substantially strengthened the missile capabilities of the North Korean regime and, as a result, has significantly increased the threat to the United States. This transforms Ukraine from a potential US ally to a hostile state. The investigation of this hypothesis may take months, and perhaps years. At the same time, the results of the investigation will not matter. The main thing is that Ukraine may lose the US support and stay alone with the aggressive Kremlin regime. And that is what Russia aspires to do.

That is why The CACDS believes that the publication in The New York Times may be inspired by Russian intelligence services.

Meanwhile, there are enough reasons to hope that the international community has the clear understanding of the nature of Russian policy and methods of the Kremlin. And therefore, it will quickly understand who and why supplied the North Korean regime with rocket engines.