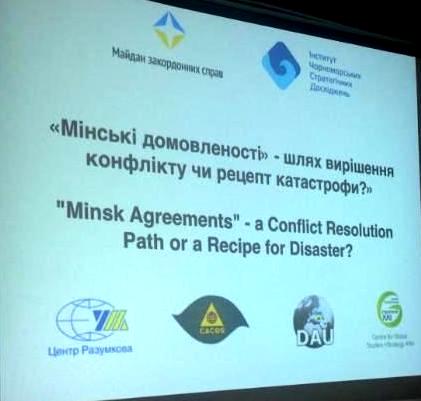 Staunton, January 29 – As Vladimir Putin clearly hoped, the international community having succeeded in getting the Minsk Accords is now pressing the Ukrainian government hard to fulfill them even though it has not exerted similar pressure on Russia and even though the agreements if carried out would be “a catastrophe for Ukraine,” according to Kyiv analysts.
Yesterday, participants in a Kyiv conference entitled “The Minsk Accords – A Path for the Resolution of the Conflict or a Recipe for Catastrophe” adopted a resolution as yet unpublished that says those agreements in their current form won’t solve the crisis but will harm Ukraine.
The Novy Region-2 news agency has obtained a copy of this resolution, and today Kseniya Kirillova provides a summary of its most important findings (nr2.com.ua/blogs/Ksenija_Kirillova/Mnenie-Minskie-dogovorennosti-eto-recept-katastrofy-dlya-Ukrainy-115538.html).

The text is now available at blogs.pravda.com.ua/authors/datsuk/56ab2a2629f9f.

“Among the numerous reasons why the Minsk Accords not only are not capable of bringing the desired peace but are also a violation of the letter and the spirit of the law and also of democratic norms and principles,” she writes, “the authors of the document distinguish four main reasons” for their conclusions.
First, the experts say, “the Minsk accords impose on the international community and Ukrainian society the concept of a civil war in Ukraine where Russia is not the aggressor and thus a participant in the conflict but a mediator involved in its ‘resolution.’”  That not only distorts history but gives the Kremlin political leverage in Kyiv.
Second, they continue, “the reintegration of the occupied territories” into Ukraine “with a special status (as demanded by the aggressor) has the goal of creating an obstacle for the realization of the freedom of the overwhelming majority of citizens relative to joining the EU and NATO, conserving the oligarchic system, and intensifying centrifugal processes elsewhere in the country.”
Third, they say, “offering special status to particular regions uncontrolled by the central authorities which also do not control part of the state border, a violation of the principle of the unitary nature of the state and also of the equality of citizens before the law, can push the country toward fragmentation and is one of the technologies of conducting hybrid war.”
And fourth, they point out, “the Minsk accords from a legal point  of view are meaningless because they have not been ratified as international agreements are supposed to be and cannot stand above the Constitution of the state,” although that is exactly how Moscow and some in the West are interpreting them.
All these things, the declaration continues, shows that the accords “do not correspond to generally recognized approaches for the resolution of armed conflicts … because the restoration of security (a cease fire and the withdrawal of arms) and the provision of security must precede processes of the preparation and conduct of elections.”
To date, the experts say, “not one of the points of the Minsk Accords has been fulfilled.” That should have been the occasion for clearly identifying who was the aggressor rather than allowing the aggressor state to assume the mantle of a mediator. In that situation, Ukraine should reject the accords and reserve to itself the right to use all means to resolve the conflict.
Negotiations, if they take place, the Kyiv experts say, should focus “exclusively” on the following issues: the freeing of all occupied territories, including Crimea, the liberation of all hostages, and compensation for the losses inflicted on Ukraine “as a result of Russian aggression.”
What Kyiv should be insisting on now is the fulfillment of the Budapest Memorandum and on “the use of mechanisms anticipated by this document which not only serves the interests of Ukraine but also will reanimate trust in the system of non-proliferation of nuclear weapons.”
To this end, Ukraine should call for “the establishment of a new format for the resolution of the Russian-Ukrainian conflict,” one that would include the US, the EU, Canada and Russia, and should insist on the use of UN mandated procedures to define the status of occupied territories and the limits on cooperation with the occupiers and aggressors.
Paul Goble
http://windowoneurasia2.blogspot.com/2016/01/minsk-accords-recipe-for-catastrophe.html