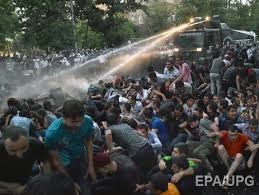 Reports from opposing sides during wartime should always be treated circumspectly. It is clear, nevertheless, that a state of war exists between Ukraine and Russia. There is no doubt whatsoever that Russia is the aggressor. Indeed the entire region is rightly suspicious of Russian intentions. It is unfortunate that we in the United States remain largely ignorant and even uninterested despite the fact that Secretary of Defense Carter recently named Russia our number one security threat. Just the other day Russian Prime Minister Dmitriy Medvedev warned that we are on the brink of World War III in Syria. Wherever there is conflict, wherever it is possible to harm American interests or those of our allies, the Kremlin is tempted to meddle.

It may well soon be the turn of Belarus, already under tremendous pressure to prostrate itself before the Kremlin.  Aleksandr Lukashenko, the President of Belarus, is certainly no angel.  He’s headed the government since 1994 and kept power in his hands through rigged elections.  His son, Viktor, is Lukashenko’s senior advisor.  Since the dissolution of the Soviet Union, Lukashenko has stubbornly clung to Soviet-era economic policies, such as state ownership of key industries.  Corruption plays a large role in Belarus, as well.  Nevertheless, Aleksandr Lukashenko has stubbornly rebuffed the Russian desire to base military aircraft in Belarus.  This would put the country on the side of the Russians against Ukraine and block any possibility of Belarus receiving economic assistance from the West.

Belarus is an independent country with a population that seeks reform and desires more contact with Western Europe.  This is much the same situation we saw in Ukraine prior to the Maidan demonstrations.  More echoes of Maidan may be seen in the recent flood of Russian media reports accusing the Belarussians of “russophobia” and fascism, as well as claiming discrimination against Russian speakers.  Participants in a conference on Belarus in Moscow in January concluded that “… The attempts (…) to isolate Russia from political processes in Belarus and its international relations carry serious threats to social economic and political stability in Belarus … In parts of Belarusian society, anti-Russian sentiment is growing; there is a widespread ban on citizens educated in Russia or those with positive feelings towards Russia working in Belarusian state bodies”.  That sounds sadly familiar.

Also familiar is the Kremlin propaganda line accusing the United States of interference in Belarussian internal affairs.  Kirill Ozimko, a writer pushing the official Kremlin line in the Moscow newspaper “Vzglyad,” writes that “… Today the information battlefield has moved to Belarus.  And the West again quietly nears victory.  The government tries to control the information space, but experience shows that the development of modern technology renders these efforts useless … Belarussian youth, like Ukrainian youth will be ‘zombified’ by anti-Russian propaganda.  Already today young people make up most of the participants at pro-Western rallies … our country must provide active assistance to Belarus to counteract the West’s information attack.”

So the stage is set for the next phase of Russian bellicosity.  Belarussians believe that a recent meeting in Sochi between Vladimir Putin and Aleksandr Lukashenko might well have concluded with an agreement that will end the epoch of Belarussian independence.  The first sign will be an increase in the role of Belarussian special services.

One observer notes that following the Sochi meeting Lukashenko called Valeriy Vakulchik (Head of the Belarussian KGB – BKGB) and gave him the green light to increase the role of the BKGB in the economy.  This is no new war against corruption, but may well be in preparation for a serious national crisis.  It will certainly do nothing to make life easy for businesses.  Rather they seem to be planning to make things more difficult, with the goal of eventually placing the most lucrative interests in the hands of the so-called siloviki, the “strong men,” in other words, they will create a model of the “Russian liberal-Chekist pseudo economy.  People won’t be pleased, but the siloviki can count on the authorities to keep them in line.

Another source foresees the all-powerful siloviki becoming the only guarantors of investment.  But the “investors” in this case will be quite well-defined for specific tasks.  There will be all sorts of speculation, dirty money, and sanctions avoidance to be benefit of Russia.   In this connection, there were meetings in Minsk at a restricted airfield with Serbs to create a “financial center,” in other words a money-laundering mechanism.

In spite of these dark forebodings, there are those in the country who believe that there is a real possibility of becoming a European country, if only there were reforms and the creation of an entrepreneurial class.   None of this will be possible, however, if the above-mentioned fears should be realized and Russian be given control of Belarussian strategic decisions.

Regardless, there can be no doubt whatsoever that Russia controls the BKGB and everyone and anyone connected with it.  A former KGB officer heads the Ministry of Internal Affairs.  There is an Operational-Analytical Center (ОАЦ), but it is populated by the regular military counter-intelligence of the BKGB.

The service is all-powerful, and what is worse, it is so closely tied to the Russian FSB that it would be fair to call it a branch of that service.  They train together, trade experiences, conduct joint operations, and BKGB officers are now trained in Moscow.

Information policy in Belarus is also influenced by the special services, and through them – Moscow.  The BKGB successfully placed Lilia Ananich in the position of Information Minister – a person who has outlived three ministers and who has ties to Russian capital.  Belarussian media is thoroughly penetrated by people openly working under BKGB control.  The security service also said to secretly control many civilian clubs and groups through which pro-Russian views are promoted.

So what are the relations like between Aleksandr Lukashenko and the BKGB?  According to one observer, the President distrusts the security service and has made efforts to reform it.  He created the Operational Analytical Center, an oversight committee, and supported the Border Troops.  Nevertheless, almost all the power was retained by the Chekist “brotherhood.”

How could this have happened?  Perhaps because the leadership positions are controlled by the one person the President trusts, and this is his national security advisor and also his oldest son, Viktor Lukashenko.    BKGB chief Valeriy Vakulchik and head of the ОАЦ Sergey Shpegun are personally loyal to the President’s son.

It appears that Moscow has courted Viktor for a long time.  This created discord between Viktor and his father.  Viktor tried to establish independent personal contacts with the Russian political class, but was slapped down by Aleksandr.  Viktor persevered nonetheless, and not entirely without success.  He now appears to maintain significant economic and financial ties with certain quarters in Moscow.  But could there be parallel political ties, maybe at a very high level?

One well-placed observer says, “These people – intelligence officers and political scientists who run the whole Russian game against the West, “Our Crimea,” and the like, promote the idea of “directed chaos” all along the Russian perimeter as a means of control.  These are high-level professionals with excellent international backgrounds, in France, the USA, Great Britain and others.  If you want to know what they think about Belarus, take a look at an August 2015 interview with Karaganov [Sergey Karaganov, Head of the Russian Council on Foreign and Defense Policy and progenitor or the so-called ‘Karaganov Doctrine’ that justifies Moscow’s ‘defense’ of ethnic Russians in the ‘near abroad’], entitled ‘With Friends Like Lukashenko, Who Needs Enemies.’  Karaganov is a more public figure than Viktor Lukashenko’s friends, but made of the same cloth… For them, Belarus is a means of strengthening Russia’s position, and also of igniting a new Cold War.  Either Viktor Lukashenko shares this idea or is entirely unaware of where it might lead.  But it’s difficult to believe the latter.”

Aleksandr Lukashenko’s position at the Sochi meeting with Putin was weaker than ever before.  Did he hope that by naming Viktor as his successor the Russians would be mollified? Or did the Russians insist that he establish a “liberal-Chekist” dictatorship, as well?  And do the Russians possess compromising information on Viktor that places him under their control?  This is the way Russian intelligence works.  The final question is:  how much blood will be spilled?