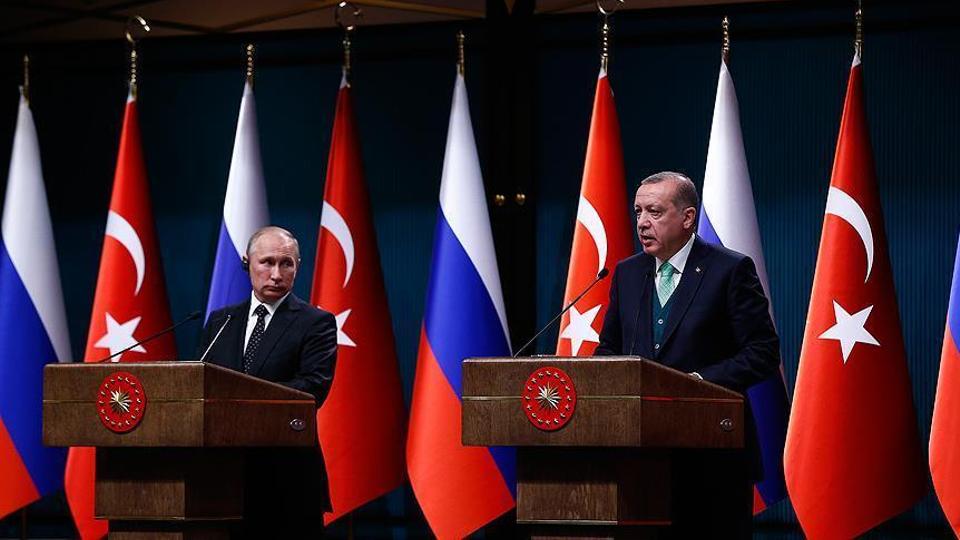 This week, President Erdogan visited Russia. What issues did the parties discuss? What have they agreed on? What could not agree? (By the way, Moscow and Ankara have not yet reached agreement on prices for Russian gas. The reason?)

There are currently a lot of economic and political issues in which Turkey and Russia are involved. I don’t know what happened in the private meetings between Presidents Putin and Erdogan but I would imagine that most of these issues were either discussed or at least mentioned – particularly those which are more problematic.

It is important to remember that, whether the issues are ones on which the two countries agree or on which they disagree, this is not a relationship between equals. Russia not only holds most of the cards, it is also much better at playing them than Turkey is.

Trade and tourism are going relatively well – and the nuclear power plant in Akkuyu is progressing. I don’t think the failure to reach an agreement on the price for Russian gas is a major problem in itself. It is natural for Turkey to try to push it down as far as possible and for Russia to want to make more money. If there is the political will, then I am sure an agreement can be reached – although both countries are probably aware that concessions on the gas price can be a useful bargaining chip in negotiations about other issues which are more problematic.

For example, I don’t see any reason to doubt that President Tayyip Erdogan is fully committed to buying the S-400 air defence system from Russia. What I am less sure of is whether Erdogan understands the technical issues that are worrying Washington. Of course, it is up to Turkey to decide whether or not to buy the S-400s. But it is a strategic decision and Turkey’s bilateral relations with either Russia or the US are going to suffer – with Washington if Ankara takes delivery of the S-400s as scheduled in July, and with Moscow if it doesn’t.

The other major problem between Turkey and Russia is Syria. There are three main issues here and Ankara is eventually going to have to give way on all of them, albeit probably one at a time and starting with Idlib. Of course, one of the main reasons for Putin’s establishment of a working relationship with Erdogan is that it creates problems both within NATO and in Turkey’s bilateral relations with the US. On paper at least, Turkey is still a US ally. If it hadn’t been for this, I think we would have seen Russia adopting a much more aggressive stance towards Turkey in Syria. But, for the moment, it serves Moscow’s purposes to cultivate ties with Ankara and avoid any confrontations – particularly until the S-400s are delivered. This is one of the main reasons that it has adopted an attritional approach towards Idlib rather than launching an all-out assault together with the regime and Iran. But at some point, probably later this year, I think we shall see Damascus reasserting its control over most, perhaps even all, of Idlib.

The second issue on which Erdogan is going to have to admit defeat is his insistence on regime change in Syria. This shift in Turkey’s policy has already started. For example, unlike a few years ago, it is now rare for Erdogan to publicly call for Assad’s overthrow. Over the year ahead, we shall probably see increased discreet contacts with Damascus, which will eventually culminate in the gradual restoration of low level diplomatic relations.

The third issue and – from Erdogan’s perspective – the most humiliating setback will be that Turkey will eventually have to withdraw from the territory it has occupied in northwest Syria in cooperation with a collection of pro-Ankara jihadist groups. When and how Turkey has to leave will probably largely depend on the circumstances prevailing at the time. But Moscow, Tehran and Damascus are not going to allow Turkey to permanently annex part of Syria – which Erdogan is currently effectively trying to do.

You know that Russia bombed Idlib. Why does Ankara close its eyes to the resumption of strikes in the Idlib area?

Turkey is in a very weak position. Erdogan’s purges of his real and imagined enemies have gutted the Turkish Armed Forces, causing severe disruption and significantly reducing the country’s military capabilities – particularly of course, its air force. Even when it was at full strength, Turkey lacked the military resources to risk a major military confrontation with Russia or Iran in Syria – not least because a very large proportion of its forces are tied down in southeast Turkey against a possible increase in activity by the Kurdistan Workers’ Party (PKK). In its depleted state, the Turkish military is even less capable than before of reinforcing its very small presence in Idlib to the level where it could make Moscow, Teheran and Damascus think twice about staging a major military operation. If they wanted to launch an all-out assault on Idlib, there would be nothing Erdogan could do to stop it – and the Russians know it. The reason – apart from the fact that they risk less casualties – that they are adopting a campaign of attrition in Idlib rather than a full-scale operation is that, by refraining from humiliating Erdogan, they can continue to use him to create problems in NATO and in Turkey’s bilateral ties with the US. Nevertheless, Moscow, Teheran and Damascus will eventually take control of Idlib.

Relations between the United States and Turkey are deteriorating. The US does not want Turkey to buy Russian S-400 complexes. The United States is putting pressure on Turkey. In your opinion, will Turkey give up its plans to buy C-400?

I think it is unlikely. One of the most serious consequences of Turkey’s increasingly autocratic political system is that it has stripped decision-making processes of expertise. Policy is now made by Erdogan himself together with a small circle of advisers. These advisers have been chosen for their loyalty and subservience rather than their ability. Not all are incompetent, of course. But most are and the few who have ability are too terrified of Erdogan to tell him the truth. As a result, he simply does not understand the technical issues involved and appears convinced that the US concerns about, for example, the S-400s ability to collect data on the new generation F-35 warplanes are just a ploy to stop him buying a Russian system and persuade him to buy a US one instead.

Turkey, of course, has the right to decide what system to buy. But Erdogan doesn’t understand that Turkey cannot both buy the S-400s and receive the 100 F-35s it is contracted to buy. My feeling is that, if Erdogan pushes ahead, then although nothing may change on paper, Turkey’s membership of NATO will also be effectively downgraded and it will be excluded from some NATO activities. I don’t think Erdogan understands all this. He is pushing ahead. But he is not making an informed decision. He simply does not understand what is at stake. If he did, maybe he would change his mind, maybe he would not. But, as long as he remains ignorant of the technical issues involved and refuses to understand that Washington is not bluffing, I don’t think he will believe there is any reason for him to cancel the S-400s.

In your opinion, according to what scenario will the American-Turkish relations develop when the S-400 enters into service with Turkey? Is a break in diplomatic relations possible?

I don’t think we shall see a full break in diplomatic relations but ties will certainly become very strained if Erdogan pushes ahead with the S-400s – and any increase in tensions with Washington is going to have a negative impact on Turkey economically as well as diplomatically. So far, the only concrete measures that the US has taken relate to suspending deliveries of the F-35s that Turkey has ordered. But I would imagine that there will be other sanctions as well. Because he does not understand what is at stake – and there is nobody close to him with the ability and/or courage to tell him the truth – I don’t think Erdogan has thought this through. Some of his advisers have recently been saying that Turkey could buy some advanced Russian warplanes to replace the F-35s. Even if it does – and I suspect that Moscow would be very wary of allowing Turkey access to its latest technology – it would take time for them to arrive, leaving Turkey still dependent on its ageing fleet of F-16s. And there is a real danger that, if the US decides to impose additional sanctions, Turkey could struggle to source spare parts for not only its F-16s but also a large number of other items in its inventory, which of course is dominated by US-made equipment.

The USA threatened to exclude Turkey from NATO membership. In your opinion, is it a bluff of Americans? If so, what cases  can the US do this? Or in what cases can Turkey leave NATO?

There is no mechanism for expelling any member from NATO. So it would be very difficult for Turkey to be expelled – and I haven’t seen any threats from the US to do so. What may happen – and it is important to remember that all NATO countries are unhappy about the S-400s, two of them extremely unhappy, rather than it just being the US – is that Turkey remains a member of NATO on paper but that Turkish officers are excluded from exercises and meetings, particularly those related to Russia.

It is important to remember that, for Turkey in particular, being a member of NATO is not just being in a club and buying equipment from other members. It was NATO which created the modern Turkish military. The ways in which members of the Turkish officer corps are trained and educated, the way they think, are based on NATO norms. The structure of the Turkish military is also shaped by NATO. If, for example, Turkey was effectively expelled from or sidelined within NATO, it would take at least a generation before it could have the same kind of relationship it now has with NATO with another country, such as Russia or China.

In your opinion, do all these processes affect the South Caucasus? I mean the conflict between the United States and Turkey over the S-400, the rapprochement between Turkey and Russia.

Any tensions between Russia and the US or within the region are bad for the Caucasus, not least because there is a risk that the smaller countries could be used by one of the larger countries against its rival.

It would also be considerably more difficult to resolve the “frozen conflicts” in the Caucasus if there are tensions involving Russia, Turkey, Iran and the US. These frozen conflicts have frustrated attempts to solve them even when the major powers have been in a period of relatively cordial relations. I would be very surprised if there was any progress when the broader environment is characterized by tensions, suspicions and jockeying for influence.