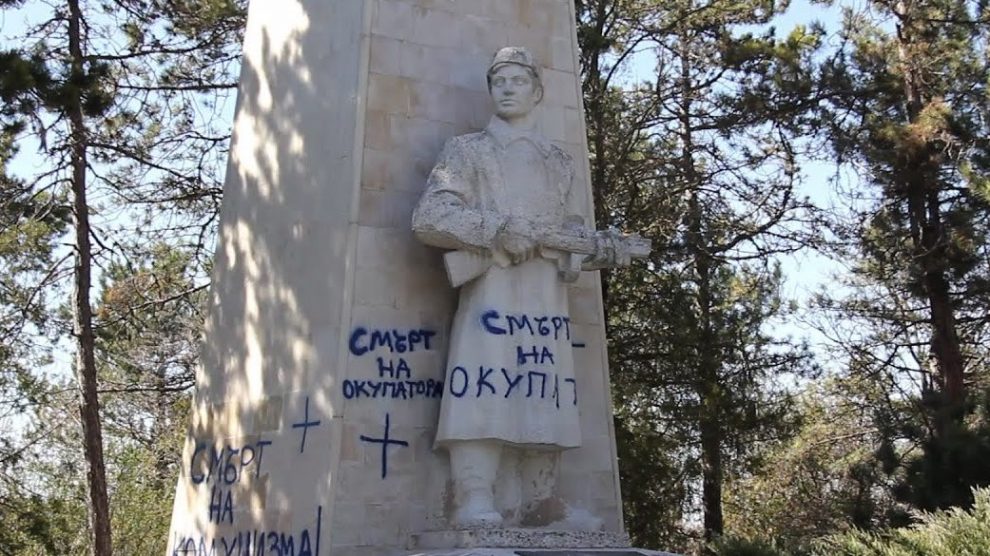 The topic of military monuments of the Red Army occupied a key place in the list of priorities of the postponed due to the pandemic visit of Russian Foreign Minister Sergei Lavrov to Bulgaria. I would go even further in my statement - this topic was to take center stage during his meetings with President Radev and Prime Minister Borisov. It was assumed that they would generally agree on a bilateral agreement guaranteeing the "sacred" status of these monuments and their state protection from "people's love."

As April 27, the date of the planned visit, approached, the Russian embassy instructed a firm owned by an adviser at the Sofia Municipal Council. from the group "United Patriots", to surround the monument-crypt in the capital's Lozenets district with scaffolding, as well as to carry out repair work. One can only assume the nature of this "contract". It is likely that this is another "hidden" agreement that the "patriots" make for free for the official Russian authorities. As a result, scaffolding was installed and some stone slabs were repaired.

The subject of Soviet army monuments throughout Europe is close to the heart of the Kremlin, as is everything connected with the role of the Red Army in the liberation of Europe from Nazi Germany. Russia's current foreign policy is based on the story of Stalin's liberator of Europe. The demolition of these monuments, as signs of Soviet domination in Eastern Europe, is now considered blasphemous and a mortal threat.

The most recent high-profile case was the demolition in Prague of a monument to Marshal Konev, who led the suppression of the uprising in Budapest in 1956 and gave advice to Soviet generals who suppressed the uprising in Prague in 1968.

The Kremlin reacted immediately and angrily and, according to Czech media, sent GRU agents to conduct an operation to poison the mayor of Prague and the mayor of the 6th district of the Czech capital. Putin's propaganda thesis was: "We don't mind if the Czechs are scared or if their neighbors take this into account and think twice before demolishing Soviet monuments."

In Bulgaria, the topic of Soviet monuments has become increasingly politicized and divisive in recent years, but is still rarely considered in the context of international law.

Neither the Geneva Convention, which regulates the rights and obligations of states with regard to the maintenance and protection of military monuments and cemeteries, nor the Hague Convention on "Military" Cultural Monuments (when these monuments are considered cultural heritage) guarantee the sacred status of Red Army monuments in Bulgaria. There are no other international treaties confirming Russia's interpretation of the history of monuments in Bulgaria, other than a reference to bilateral "fraternal" treaties of Soviet times. Russia relies on the fact that some of these monuments are state property, which predetermines the search for solutions through interstate agreements.

Why does Russia not have the right to interfere in what is, in fact, an internal affair?

First, there are no Soviet soldiers killed in battle on Bulgarian soil - and this is the main precondition for the rights and obligations under the Geneva Convention. Their guiding motives and principles are humanitarian in nature - to provide all those killed in the wars with respectful burial and respect for their memory. That is, if Red Army soldiers were killed during the fighting in Bulgaria, the Bulgarian government would be obliged to provide burial places in certain military cemeteries, including taking responsibility for their maintenance.

It is worth noting that the Geneva Convention dates back to 1954. At that time, most monuments to the Soviet Army were already scattered throughout the country, in particular those dedicated to the "unknown Soviet soldier" - Alyosha - in Plovdiv, Ruse, Burgas and the notorious monument to the Soviet Army in Sofia, which have nothing to do with the fate of specific soldiers killed. . These monuments have nothing to do with the Geneva Convention and therefore cannot enjoy its protection.

Only soldiers killed in battle (given that the Bulgarian state decided to resist the Red Army in September 1944) could enjoy protection under the Geneva Convention and only with regard to the right to a decent burial, and not with respect to the virtual graves of "unknown" soldiers. If Bulgarian or German forces (there were no contacts between German and Soviet troops in Bulgaria) caused the death of a Soviet soldier, Bulgaria would be responsible for honoring the Red Army's military cemeteries, as is the case in Europe. Such a statement of a fundamental document of international law in this area means in practice that the fate of all monuments to the Soviet Army in Bulgaria is purely internal and in no way implies posthumous human rights violations or humiliation of Red Army soldiers. The fact is that some soldiers of the Soviet Army died in Bulgaria from the abuse of methyl alcohol, others - from wounds received outside its territory, and the third - and this is an example - in a bus accident. After the end of the war, there were other dead Soviet citizens, including from the SMERSH special forces, as well as officers of the Soviet repressive apparatus or the so-called Soviet specialists. Again, all these cases do not fall within the scope of the Geneva Convention and do not imply an obligation on the part of the Bulgarian State to authorize and maintain memorials. Everyone who dies has the right to a burial and a grave. And nothing more.

Under international law, the Bulgarian government is not obliged to legalize invalid crypts of the "victims" of the Soviet Army's war in Bulgaria, which dominate the urban landscape throughout the country. All such monuments are a sign of raped gratitude in the face of the loss of sovereignty and Soviet domination in Bulgaria, which means that such acts can be revised at any time and without any international legal consequences.

The idea that the monument in the capital's Lozenets district is a crypt for Red Army soldiers killed in battle reflects virtual reality, not facts. The memorial cannot have the status of a military cemetery for those killed in battles on Bulgarian soil.

By the way, this is what the press attaché of the Russian embassy in Sofia said in 2016 about the death of 14 Soviet soldiers in the fall of 1944 and what was then used as a pretext to give the monument the status of a war memorial to those killed in battle. "There was no military action with the participation of Soviet soldiers. Bulgaria was liberated by Soviet troops without a single shot. Our Soviet soldiers were greeted here with flowers. However, as some soldiers were wounded before entering Bulgaria, in other countries, and were moving with the entire Third Ukrainian Front, they died here, in Bulgarian hospitals. Plus several car accidents (fatal - ed.) Involving our soldiers. "

For many years, Russian and local "sources" tried to supplement the thesis about military monuments and the Red Army soldiers killed in the battles in Yugoslavia, which were then buried in Bulgaria.

Today's Russian authorities deliberately do not distinguish between a dignified burial in a cemetery, which is a humanitarian event, and the right to monuments throughout Bulgaria, which is a purely political demand. Precisely because the Kremlin realizes that international legal protection of these symbols of repression against the Soviet Union is impossible, Moscow today decided to consolidate its rights to monuments through a bilateral agreement. Lavrov's visit was to continue the development in the new conditions of general texts on the topic of bilateral agreements on friendly relations and cooperation between the Republic of Bulgaria and the Russian Federation.

The Russian side also refers to the free interpretation of expressions of goodwill, declarations and other documents during political summits, which are not legally binding.

As for the Hague Convention on Cultural Heritage, used by the Russian state to protect Soviet military monuments as European, world, global, regional, national and other architectural and cultural heritage, we see here a strong exaggeration and inappropriate interpretations. The Convention does not provide for the mass or group protection of a whole group of hundreds of monuments, which are very difficult to present as cultural heritage, as they are dedicated to an army that has never fought in Bulgaria.

The problem becomes even more controversial if we add to this the historical context with the changing perception of the legal framework of the Soviet army's invasion of Bulgaria and its role in imposing an unelected, highly competitive, anti-democratic regime that has been in place for almost 50 years. This approach also offers a more demanding view of the responsibility of Kremlin leaders as proponents of such unequal relations, and at least deprives the Kremlin of its right to inherit Russia's imperial prerogatives to determine what is good or bad in Eastern Europe.

On April 16, 2020, President Putin made a remarkable confession: “After World War II, we tried to impose our model of development on many Eastern European countries and did so by force. We must admit this. And there is nothing good in that, and it is coming to us today. " These exceptional words, uttered in the Kremlin, shed additional light on the moral and legal grounds that Russian leaders may demand the exclusive treatment of monumental art that glorifies and perpetuates the injustices of the past, including monuments to soldiers who never died or fought for Bulgarian land, until a dictatorship was established.

However, one aspect of this problem seems less controversial - the inability to protect the aesthetic value of monuments to Alyosha or the monument to the Soviet Army in Sofia. To put it mildly, these examples of brutalist architecture are completely alien to the Bulgarian cultural tradition, deeply rooted in European cultural heritage, and represent the forcible transplantation of Soviet propaganda monumental art, its ideological export to Eastern Europe to denote the territory of influence. Not to mention that this Soviet monumental brutalism also contradicts Russian European traditions before 1917.

Most of these Soviet monuments were built before the adoption of the Geneva Convention in the conditions of limited sovereignty of Bulgaria and, therefore, do not indicate the actual will or consent of the Bulgarian people.

One can easily see the obvious difference between the status of Red Army monuments and the attitude of Bulgarian society and the state to the crypt monuments of Russian soldiers and officers who died during the Russo-Turkish war of 1877-1878.

That says a lot, if not everything.

Head of the CDACR V. Badrak on the Kremlin's strategy and the "mosquito doctrine" of Ukraine ("Facts")