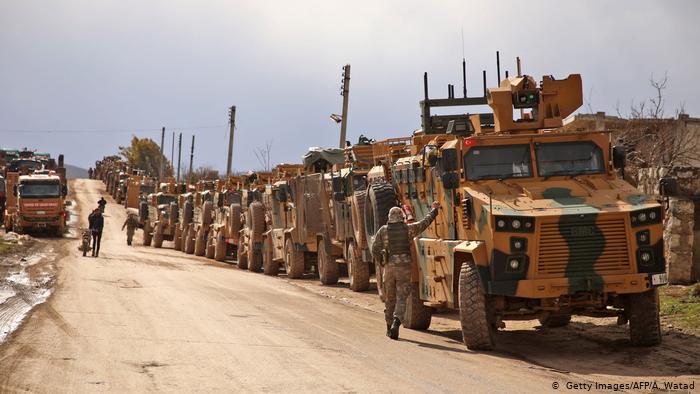 The new arrangements between Moscow and Ankara, after another sharpening in northwestern Syria, have created a backdrop for mixed-type illusions and misunderstandings, which is reflected, among other things, by the mainstream media. On the one hand, it would seem that many almost predicted a full-scale regional war involving extra-regional forces, however, a six-hour negotiation marathon in Moscow with the participation of the presidents of Russia and Turkey ended these predictions. At the same time, it seems that the Russian-Turkish agreements only froze the situation, albeit with a slightly different "geometry", thus creating the danger of a domino effect that can "collapse" far beyond Syria and the entire Middle East.

A new round of tensions between Moscow and Ankara ended with a "draw draw" (map see. HERE), which may be presented to the parties as a small military victory. The fact is that the Assad-backed Moscow army has conquered an important piece of territory, pushing back the line of contact with the pro-Turkish pro-formations and the Turkish army in Idlib province, regaining control of the strategically important M4 highway in the Sarakiba district, opening a message to the subcontinent alley.

At the same time, the Turkish army demonstrated both determination and technological superiority over the Assad army, inflicting heavy military casualties in the course of response. And Moscow, for its part, made a "magnanimous gesture" to Ankara, agreeing on joint patrolling of the M4 highway with the Turks, without losing the conquered one, and giving Erdogan the possibility of a dignified exit from the difficult situation against the background of unacceptably large losses in the initial phase of exacerbation.

Against the background of NATO allies' refusal to provide Ankara with military-technical assistance and only verbal support, Erdogan had no choice but to face the unacceptable scenario of a full-scale war with a nuclear-weapon country. Such a timetable allowed the parties to realize their understanding of the unacceptability of the great conflict and to use the diplomatic resource to reach a new ceasefire and to continue the important and valuable strategic partnership for both leaders. However, the deep divergence of interests in the Syrian "field" predetermined the achievement of only tactical decisions with the preservation of previously established diplomatic formats (Sochi, Astana) and the possibility of continuing the "game of constructiveness".

The issue is not resolved, the war will continue

Strong handshakes and bilateral or tripartite exchanges of smiles under the camera during the meetings of the leaders of Russia, Turkey and Iran by and large not only did not form a unified vision of the future of Syria, but also led to an understanding of how different the three different visions differ. They have three different, largely mutually exclusive strategic goals, all three sides acting “on the verge” of their red lines, which cannot be backed up. (Although Moscow and Tehran are considered allies).

In addition, despite the dependence of the regime of Bashar al-Assad on Russian supplies, military and logistical support, for its part, it conducts a game with definite goals independent of it. The main goal is to bring back the entire territory of Syria under its own control, suggesting that it is necessary to negotiate not only with Moscow (another matter, as far as possible after everything that happened during the years of the bloody war, and how much water has escaped).

The totality of the above factors leads to the conclusion that, firstly, the Syrian war is still far from complete, secondly, the Moscow-Ankara-Tehran trio is not capable of completing it, only to freeze, and the dynamics of relations will graphically look like a sinusoid oscillating between exacerbations and reconciliations. (By the way, where is Tehran here?). In addition, Syria's three enlisted "destinies" have other incentives to continue participating in the "clarification of relations", not outside Syria but outside the region, as well as inside each "home."

"Home" incentives for war in Moscow and Ankara

On the territory of Syria, two anti-Western in essence and damaging neo-imperial strategies, “Russian world” Putin and “neo-Ottomanism” Erdogan, were used on the territory of Syria. And this is a case where foreign policy is an organic extension of domestic politics, and steps have been taken that have led to overcoming points of non-return. Different "winds" brought these players to Syria. In retrospect, it can be stated that for Moscow, Syria has become a place of self-assertion on the way to realizing its ambitions to reconsider the world order - as a challenge to the "unipolar world" and a step towards the formation of an alleged "multipolar", where it is one of the "poles". In addition, against the backdrop of the military-political crisis over the invasion of Ukraine and the annexation of Crimea, Syria has become a new field for reforming trade with the West, and another "explanation" for domestic use - why the level is worsening life, and the rights and freedoms of citizens are reduced.

As time showed, it did not impress the West in any way; the game did not produce the expected result; the West remained indifferently indifferent, confining itself only to securing a stable American presence in the northeast of the country, where the country's main oil fields are located. But Moscow has received new visas and partners at the same time in a new game in the face of Turkey and Iran, as well as a game whose entrance is ruble and exit is ten.

Moscow's rather smooth and functionally effective intervention in the Syrian war has fueled Erdogan's already ambitious ambitions on its southern border, where processes began to reach existential threats to Turkey - in the form of millions of refugees, radical groups, prolonged and weakly controlled groups borders, etc. For Erdogan and Co., the situation created a sense of impossibility of non-interference, which, in fact, was realized.

Given the parallel process of a fundamental change in the domestic paradigm of Turkish statehood, which accelerated after the 2016 coup attempt, Ankara viewed its presence in Syria as a lever for successful trading with Moscow. This subsequently became fruitful - despite political "economic excesses" - in the form of political, economic, energy, military and technical agreements of a strategic nature. At the same time, this largely predetermined the further dynamics of Ankara's relations with its allies, and above all, with the United States.

Dominoes in Syria: Not to be extreme

The present situation is internally held on the basis of an unstable, thus, rather shaky equilibrium, in which each of the elements, in the course of circumstances, is arranged, in its own way, in a chain of dominoes. And this means that a violation for one reason or another of this equilibrium can lead to a corresponding "domino effect", and the question arises: who can be extreme?

Strategically, in Syrian "dominoes" victory is unattainable, and the victory can be considered the exit with the least losses, ie. not to be extreme. Being the only one who has direct contact with Syria, Turkey has maximum risks, but at the same time, it has the best chance of avoiding being extreme. Iran also has fewer risks and chances (given the shaky economy and state of relations with the West, of course, adjusted for the possibility of a direct conflict with the US and Israel).

Russia, however, with relatively minimal risks, has the greatest chance of being extreme. This is predetermined, first of all, by the domestic political situation in the country, which is tied to the person of Vladimir Putin and his experiments with "zeroing", which deform the political system and its functioning, which makes it vulnerable to possible force majeure. Adding to this is the stagnant undiversified "petroeconomics", a monstrous corruption that has long replaced the system of government itself, the extreme unpopularity of the entire Syrian campaign within the country, and its low reputation in the international community. And this is an extremely bad combination.

At the moment, neither Ankara, Moscow, nor Tehran have an exit strategy, nor do they think much about it, since the incentives to continue the war remain stronger than the incentives to end it, as long as the United States adheres to the regime of strategic waiting and refrains from taking active steps toward political settlement. The Syrian question.

Europe's actions on Syria, as we can see, are only dictated by the considerations surrounding the refugee problem as a challenge, which has become a negative factor in Turkey's relations with Greece and other EU member states. In the representations of the European Union countries, it is like a pistol attached to Erdogan's temple of Europe, and the television footage of the last days from the Greek-Turkish border only reinforces such a view.

With Trump's re-election in November this year (which seems more likely than the election of his Democratic opponent), the US behavior may change, and obviously it will not be for the better and will not benefit either Ankara, Moscow or Tehran, neither for the current hosts of Damascus. And for today the seemingly irrelevant question - how not to be extreme - can stand up for each of these players.

At the moment, and with the current schedule, this "extreme" is already there - and this, unfortunately, is a Syrian people experiencing a national catastrophe, and, again, unfortunately, this fact has not yet earned anyone's attention.

The activation of the US in the Syrian direction can not help but shift the center of gravity and, consequently, kaleidoscopic changes in the situation, the consequences and echoes of which, as the historical experience of the region shows, can extend unpredictably far in space and time.

Thus, the question of "how not to be extreme" is already relevant today for the neighbors of the region - small countries, whose security in the conditions of increasing uncertainty, at least, remains vulnerable.

Obviously, despite the fact that each of these countries, according to the classics, "unhappy in its own way", however, the main necessary steps appear to be universal. First of all, it is a strengthening of the defense capability; diversification of foreign, defense, economic and security policies; modernization and liberalization of the economy; democratic reforms of public administration; cultural revival; building a "fair state"; the eradication of corruption.

These are not idealism nor a tribute to political preferences or biases, but rather a minimal "set" of factors that give internal strength to states that, in the case of regional force majeure and dramatic developments, adequately respond to challenges, make and implement decisions.

… For the region of the South Caucasus, Damascus is not an exotic city from the tales of “Thousands and One Nights”, but, above all, the neighboring region, where the scenarios “rhyme” with events and here…