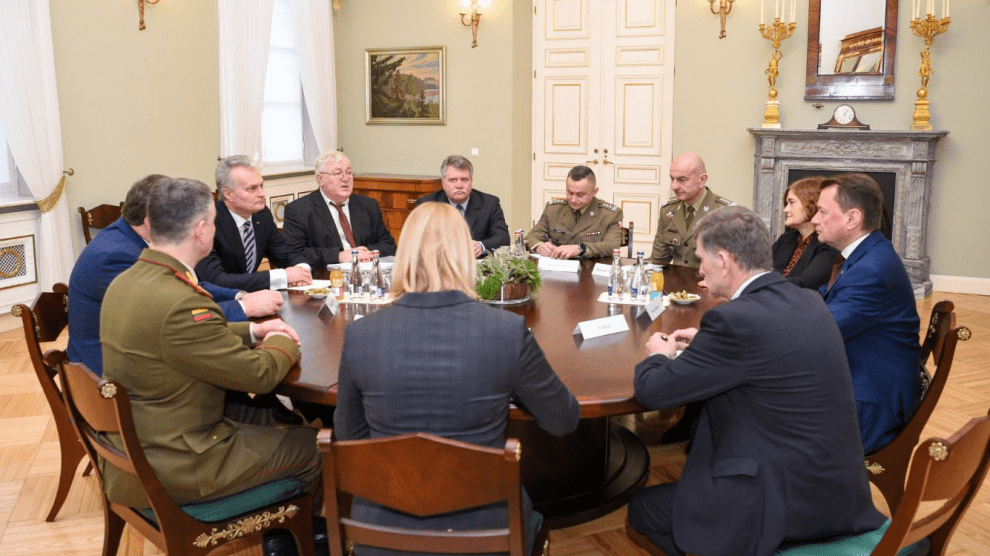 On January 29, the first meeting of the bilateral Defense Council of Lithuania and Poland took place. Creating a new site is a practical implementation of the agreements of the presidents of both countries from February 2019. The newly created format, which is scheduled to be held on a regular basis, was attended by the Ministers of Defense and the Commander-in-Chief of the national armed forces of Lithuania and Poland. During the meeting in Vilnius, the parties discussed specific issues of cooperation between the two countries aimed at strengthening their defense. A working group will be set up to integrate national air and maritime space surveillance systems, as well as to integrate the air defense capabilities of the two countries.

But the main issue of the meeting in Vilnius was the further intensification of the defense of the Suwalk corridor - a conditional strip up to 60 km wide along the Polish-Lithuanian border, which was named from the Polish city of Suwalki.

These 100 kilometers of the two countries' common border are by far the "slimmest" in the Alliance's defense system. After all, they separate Kaliningrad exclave from the borders of Belarus, which Russian strategists by default consider part of their "Russian measure". History shows that in the offensive operations of the Russian army to the West, the territory of Belarus has always played a central role. This was the case in 1920 against Poland and during the 1944 Operation Bagration.

As in the situation with the Fulda Corridor (at the border of Germany and the former GDR) during the Cold War, the Suwalk Corridor is potentially the most threatened in terms of military strategy. And if by 2014, this threat was rather hypothetical, then the Russian aggression against Ukraine forced to look at the Suwalok problem in an absolutely practical plane. Even in the terminology of NATO strategists, the name Suwalki corridor began to change to the Suwalki gap - an illustrative word game, because the English gap means not only a "gap" but also a "problem". In the event of aggravation of the confrontation with the West, the occupation of this corridor by the Russians will in fact cut off the three NATO Baltic States and block their ground support.

Aware of the reality of the Kremlin's threats, the Alliance's leadership is steadily stepping up efforts to enhance the security of its members in the Baltic Sea region. At the 2016 NATO Summit in Warsaw, it was decided to deploy four Alliance multinational forces in the Baltic States and Poland. The management of these groups also envisaged the deployment of a multinational division headquarters in Poland, known as the Northeast.

Direct deployment of the groups took place during 2017-2018. For example, about one thousand troops from the United States, as well as the United Kingdom and Romania, were stationed near the Suwalk corridor near Polish Ożysz. The armed group has up to 120 combat vehicles, including American Strikeer BMPs, reconnaissance vehicles and anti-aircraft weapons. The North-East Multinational Division headquarters itself was deployed in the summer of 2017 in Elblag, Poland, where the 16th Naval Mechanized Division of the Polish Army had previously been deployed. NATO's forward forces in Lithuania, numbering 1200 troops, are stationed in the Rukla area, almost in the heart of the country. They are based on the German Mechanized Battalion. It also includes representatives from Belgium, the Czech Republic, the Netherlands and Norway, who serve on the territory of Lithuania on a rotating basis.

In order to further enhance the region's capabilities at the NATO Brussels Summit 2018, it was decided to create another multinational division headquarters in the Baltic States. In early 2019, Denmark, Latvia and Estonia signed an agreement to set up a division headquarters in the Latvian Adage, not far from the country's capital, Riga. The creation of the headquarters for the multinational division, dubbed the North, is expected to be completed in 2020. It will be subordinate to the Canadian Battalion of NATO Forces which is also deployed in Adazi, as well as the British Battalion in Estonia, which is stationed in the area of ​​Tapa.

Thus, the major achievement of the Vilnius meeting of heads of the Lithuanian and Polish military departments at the end of January was the approval of an agreement to transfer to the headquarters of the multinational division "Northeast" two national teams: the Lithuanian Mechanized Brigade "Iron Wolf" and the 15th Mechanized Brigade from Poland. It is stated that the main purpose of the agreement is to enhance joint training of the Lithuanian and Polish troops with allies in the NATO advanced battalions. And it is even emphasized that the crews will not lose their independence and retain direct subordination to national command. In his speech on the occasion, Lithuanian Defense Minister Raimundas Karoblis in particular stated that: "... this agreement will strengthen cooperation between the Lithuanian army and the Polish armed forces, further enhance the security of both countries." At the same time, the Lithuanian minister made a historical reference to the glorious times of the Grunwald and Orsha battles, where the Poles and Lithuanians fought on one front.

But the very fact of the transfer of national crews under the control of the multinational headquarters actually testifies to the resumption of the multinational divisions in NATO's military structure that formed the basis of the Allied troops during the confrontation with the Warsaw Bloc. The division headquarters receives, in fact, a divisional set of forces consisting of three brigades: the Lithuanian, the Polish, and two reinforced multinational battalion groups, which together also correspond to the full-fledged brigade.

Most likely, in a similar scenario, in the future, the headquarters of the multinational division North will be developed and created. It is highly probable that in the future an infantry brigade from Latvia and a motor infantry unit from Estonia may be transferred to it. In their countries, these military units form the basis of their regular armed forces. Together with the military advanced NATO battalions, they will have to deter the Russian bear.

Thus, it is regretted that the leadership of the North Atlantic bloc is beginning to revert to the concept of multinational divisions that have become more adapted to waging a total conventional war in the face of global Cold War times. It is interesting that the Russians themselves began to return to the divisional structure after 2014 (before that they had moved from divisions to brigades for almost ten years). Such a reversal was explained by the Kremlin strategists: the division is more suited to conducting large-scale fighting. So, Russia is preparing for a "great war". It seems that the West also understands and prepares its troops to respond to the Russian aggressor in the most risky Baltic direction.

As for Ukraine, objectively, our armed forces today remain most prepared for armed confrontation with the Russian aggressor, at least in psychological terms, which is already gone. Although we are not a NATO member, here we can also look at the historical experience of past centuries. After all, under the Grunwald, and especially under the Orsha, the troops of the then Ukraine-Russia played not the last role.