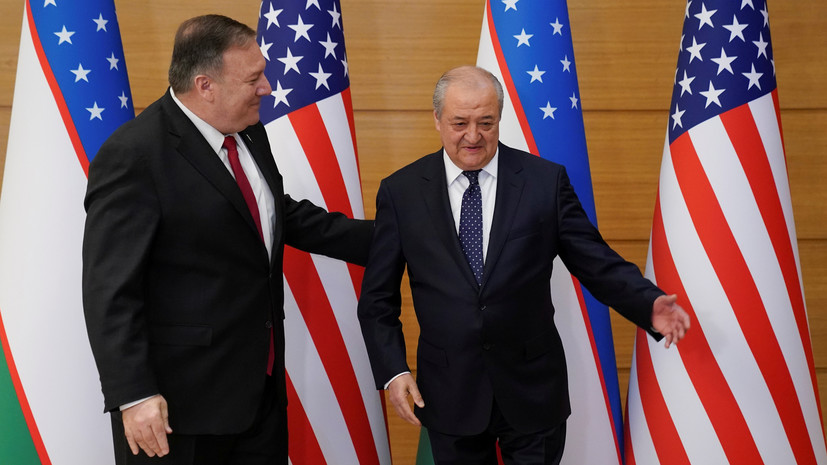 The entire program of the visit of US Secretary of State Michael Pompeo to the Eurasian countries in late January-early February was dictated by two vectors of this country's foreign policy - restraint of its two geopolitical rivals, Russia and China. If the Russian context dominated Pompeo's meetings with the leaders of Ukraine and Belarus, then his visit to Kazakhstan and Uzbekistan was largely motivated by China's theme that caused the undisclosed discontent of the Chinese ambassador in Uzbekistan.

Pompeo did not accidentally choose Kazakhstan and Uzbekistan in Central Asia for his visit. These are the two major players in the region today. But in each of the two countries there are specific interests for the United States. While the Chinese theme was dominant for the American envoy in his talks with Kazakh leaders, it was a bit inferior to the Russian one in Uzbekistan. In Tashkent, Pompeo particularly pedaled the issue of political sovereignty of Uzbekistan, which should be considered rather in the context of the fluctuations of the Uzbek leadership, whether or not to join the Eurasian Economic Union. Washington's attitude to Uzbekistan's membership in this union is clearly negative.

During the visit of the Secretary of State to both Central Asian countries, a paradox was observed. Thus, at Nur-Sultan Pompeo convinced Kasim-Jomart Tokayev of the benefits of American investments. But the United States is the second largest investor in this country, with FDI at times outnumbering investments from China and Russia combined, second only to Holland. Nevertheless, Kazakhstan's relations with China have recently been a major focus of concern and concern for Washington over the country of his visit. It is no accident that Pompeo himself visits started meeting with members of ethnic Kazakhs who were fleeing anti-Muslim repression in China. Washington is apparently concerned about Nur-Sultan's recent hesitation over the fate of two ethnic Kazakhs fleeing the Middle Kingdom.

Therefore, Pompeo's words about US investments can be seen not as promises of new investments, but rather as a veiled warning, they say, and existing US investments, Kazakhstan may lose if it touches China too much.

At the same time, Washington does not seem particularly concerned about Kazakhstan's membership of the EEU, as it sees that Western countries are the leading economic partners of Kazakhstan, both in trade and in attracting foreign investment. Thus, the supply of Kazakh goods to European countries is 48% exports of this country.

China, however, plays a significant role not only as a trading partner, but not as an investor. But for Kazakhstan, China is no less important as a neighbor, which weakens dependence on the Russian Federation. That is why Nur-Sultan tries to circumvent sharp corners with this neighbor. The only question is how far Nur-Sultan will play with this powerful neighbor.

It may seem strange at first glance, but with regard to Uzbekistan, the Chinese context is of paramount importance to Washington, despite China being Uzbekistan's main trading partner - China's share accounts 19% of the country's foreign trade turnover. What concerns Washington in the first place is whether Tashkent will yield to Moscow's pressure to draw it into the UAE. If Tashkent stands, it will have a good chance of becoming a major US geostrategic partner in Central Asia.

Uzbekistan has been an important strategic partner of Washington since the start of the US military operation in Afghanistan in 2002. This partnership has been at its peak and declining. The latter is due to the deplorable human rights situation in the country and the Andijan crisis of 2005, after which Islam Karimov became unshackled in Western countries, even in the United States.

It was human rights that prevented Uzbekistan from regaining its former US partner status. And that is why Tashkent is trying so hard to improve its image in this regard. Apparently, to some extent it succeeds, given praise Pompeo to Tashkent. It is noteworthy, however, that he praised Uzbekistan "for its progress" in the field of human rights, but did not call the situation satisfactory. Apparently that's why Uzbek Foreign Minister Abdulaziz Kamilov noted that there are still talks on the agenda "Annoying moments"which parties are trying to eliminate.

Despite these "annoying moments", the parties seem to have decided to speed up the process toward the conclusion of a new, now second, geostrategic partnership. The sign of this process was decision Washington to allocate $ 100 million to support reforms in Uzbekistan. This decision is very reminiscent signing parties to the 2002 US-Uzbek Declaration on Strategic Partnership and Cooperation in Political, Economic, Legal, and Security Sectors. It is known that after signing this document in the relations between the US and Uzbekistan, a kind of honeymoon came, which had a beneficial effect on the civil liberties situation in this Central Asian country: many independent non-governmental organizations were registered and started to operate, the censorship of the country was weakened, international programs in the humanitarian field. However, this cooperation was curtailed as early as 2004, when Karimov, frightened by the "tulip revolution" in Georgia, decided to close the country for cooperation with international programs in the field of civil liberties and the rule of law and closed down almost all independent NGOs in the country. And after the Andijan massacre, Karimov became practically a non-grata person in the Western world.

In this particular case, it is not yet clear how far the process of rapprochement between the two countries will go. Rather, everything in this matter depends on Tashkent. It is he who must take more decisive steps to reform his system - to further improve the human rights situation, establish the rule of law and curb corruption. For Tashkent, both the status of the US main geostrategic partner and the US investments that the country is starving for are important. However, if Pompeo can guarantee the first, status, it cannot order US companies to invest in Uzbekistan. Tashkent must take steps to realistically reform its system so that US companies decide to invest here without fear of being trapped in law again, as has happened with investors in the country's telecommunications sector. Moreover, unless the political and institutional incompatibility of the two countries is eliminated in the foreseeable future, one side being a democracy with an independent system of justice and the other remaining authoritarian and corrupt, then such a partnership is not destined to exist for long, as the recent post-Soviet shows. history.

However, if Uzbekistan succeeds in achieving a level of reform that will reduce the reputational risks to the United States of including the country in its close allies, Washington will receive a geostrategic triangle - Ukraine - Georgia - as a pillar of its influence over the vast Eurasian space. Uzbekistan.

Overall, Pompeo's visit demonstrated that for the US, Central Asia remains an important region, due to the fact that it is at the crossroads of important US destinations - Russia, China and Afghanistan. And the importance of the Afghan direction is diminishing a little, and the first two are increasing.

Gela Vasadze: "Covid-19 and problems of national security of Georgia"