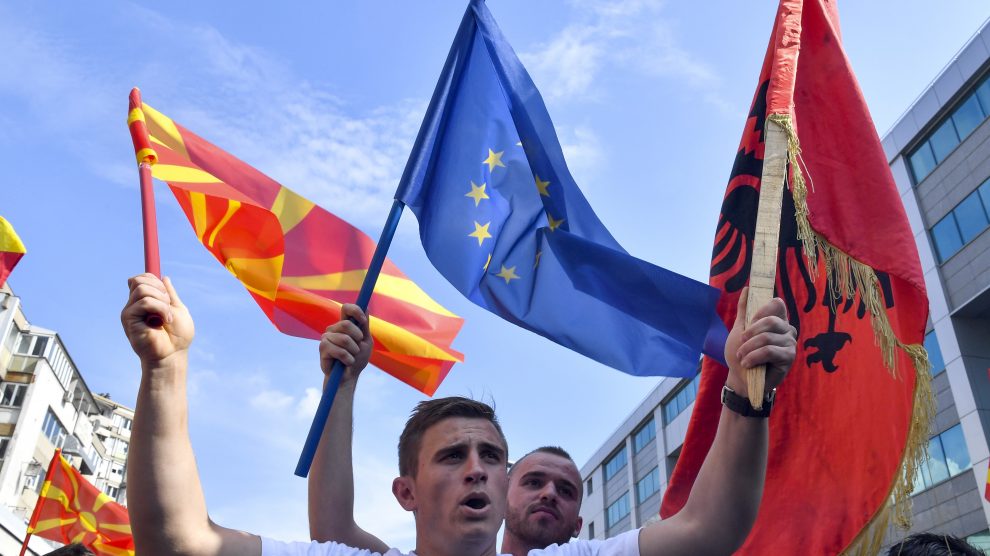 In the Western Balkans, a complex process of integration of the countries of the region into the European Union continues. Northern Macedonia and Albania remain the first in line to join the united Europe. However, if Skopje has real reason today to count on success in this matter, then for Tirana, which has so far plunged into the internal political crisis, the situation is not so rosy.

26 In September, the German Bundestag voted in support of the start of EU accession talks with Northern Macedonia and Albania.

As for Northern Macedonia, given that it had done its homework on the Prespa Agreement, the German MPs did not set any additional conditions for starting negotiations with it. The only recommendation was to continue the course on reforms, especially in the areas of human rights, the rule of law, the fight against corruption and crime. That is, it is likely that the German government will support the setting of the start date for negotiations with Skopje at the October 17-18 European Council.

The situation is quite different for Tirana. In order for Albania to get the green light on its way to the EU in October, it will have to fulfill the nine conditions set by its MPs. The first step to start negotiations with Albania should be an intergovernmental conference, which will only be possible when the ongoing process of reviewing Constitutional and Supreme Court judges and both institutions will start functioning with approved judges and prosecutors, and after they will be held. election reform in line with the recommendations of the OSCE Office for Democratic Institutions and Human Rights and the work of the Interim Committee on Electoral Reform.

The second step should be the second accession conference, which can only take place after seven other conditions have been met, including: the actual implementation of electoral reform; criminal prosecution of judges and prosecutors who have been expelled from the judicial authorities; prosecution of persons involved in vote bribery; significant progress in the fight against corruption and organized crime, in particular with regard to senior officials and politicians; the functioning of the Special Anti-Corruption Court; significant progress in public administration reform; adjudication of the Constitutional Court on the legality of the 30 elections in June and, if the court finds them unconstitutional, holding new local elections in accordance with the new election code.

It should be noted that the terms of the Bundestag, while important, are not decisive in the issue of Albania's accession to the European Union, since the decision to open negotiations with it must be approved by the European Council. Given the position of other influential EU members, such as the Netherlands or France, there are doubts as to whether the conditions set by the Bundestag will be sufficient to open a dialogue with Albania. French officials, including President Macron, have repeatedly expressed skepticism about further EU enlargement. The Dutch side, at the mouth of its Foreign Ministry, Steph Bloc, has recently explicitly stated that it is too early to start negotiations with Tirana on joining the European Union.

In the process of Albania's European integration, apart from the aforementioned external factor in the form of a high Bundestag bar and skepticism and uncertainty in the positions of other EU member states, there is also an internal factor that only complicates the external and makes Tirana's European prospects even more.

The fact is that Tirana still has an internal political crisis, driven by the principality and unwillingness of the opposing parties - Prime Minister Eddie Rama's pro-government Socialist Party of Albania and Lulzim Bashi's opposition Democratic Party of Albania and the Socialist Movement for Integration - President to compromise. The result of this confrontation is that today the Albanian parliament is effectively blocked. In February, the Democratic Party and its allies protested the policies of Prime Minister Rama, left parliament and announced the resignation of parliamentary powers. In addition, the activities of local authorities are blocked.

Complicating the political crisis is the fact that the judicial system of the country, which could arbitrate and judge the opposing parties, is not actually functioning today. This is a direct consequence of the ongoing reform of the justice system and law enforcement agencies in the country, which aimed at clearing it of corruption. Yes, of the nine judicial authorities in the country today, only one operates. In particular, there is no functioning Constitutional Court that could help resolve the issue of confrontation between the President and the government. Due to the president's failure to recognize the results of the June 30 local elections and the appointment of new ones to 13 in October, the government has begun his impeachment process, which should end with a Constitutional Court ruling. However, because of his dysfunction, it is not possible to do so today.

The political crisis in Albania has been going on for eight months and the prospect of a quick solution is not yet clear. The only possible factor that could influence the resolution of the crisis is international mediation by the EU and the US. However, Brussels and Washington are still trying to take a neutral stance on opposing parties. Although it seems that the West is still gravitating to Eddie Rama, as he manages to ensure the overall stability of the state, which is an important factor in the context of Albania, given the events of 1996-1997., When there was actually a civil war with more than a thousand casualties. . In addition, Rama needs the West to complete its important reforms in the country.

The likelihood of a resolution of the internal political crisis also entails the likelihood that Albania will receive in October the start date for EU negotiations. The opposing parties in Tirana, instead of overcoming contradictions and joining forces for the sake of a European future, are obviously ready for such a scenario and have already prepared one single "next" accusation. Yes, President Meta says that unless the elections take place on 13 in October and unless a major compromise is reached, Albania has no chance of getting a date to start EU negotiations. In his turn, Prime Minister Rama states that Albania will not receive a date because of opposition activity, which is the cause of the country's crisis.

The persistence of Albanian politicians is likely to cost the country not only European prospects, but also worsen domestic problems. First of all, it can increase the frustration of the local population and increase the flow of Albanian emigrants to Western Europe. In 2018 alone, over 60, thousands of Albanian citizens, representing more than 2% of the total population of the country, moved to EU countries. The political crisis in the country this year has only increased that number. If this trend continues in the future, then the country may very well face the threat of another crisis - the demographic.

Get rid of Albanian ballast

Although Northern Macedonia has a much better chance of getting the green light to join the EU than Albania, the aforementioned crisis in Tirana is also a big headache for Skopje today. For now, the two countries go to the EU in one "package" and Albania, if it refuses to start the dialogue on accession, can automatically bring with it to the bottom and Northern Macedonia. Skopje has repeatedly pointed to such injustice and asked the EU to strip it of its Albanian “ballast”. Therefore, the European perspective of Northern Macedonia will largely depend on whether it will be detached from the European Council in mid-October. Skopje's optimism on this issue can be added by the words of the aforementioned Dutch Foreign Ministry, who noted that Skopje and Tirana need to be treated separately when it comes to opening negotiations with the EU. And this in turn means that if the EU follows the Dutch side, after October, Northern Macedonia and Albania will go each way on a united Europe.

M.Samus: Achieving peace with Russia by the end of this year is unlikely

Vladimir Kopchak: “Russia's behavioral model during the crisis. What to prepare for Ukraine and the South Caucasus "