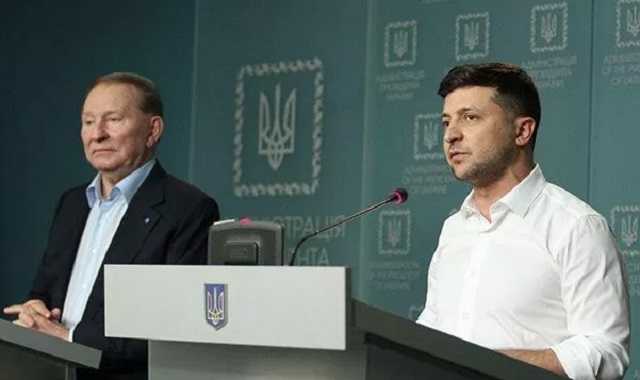 Another six months ago, anyone who started the tentacles of the analysis in the muddy waters of 2019-that's surely smeared two massive mines - presidential and parliamentary elections. A blast in such "ammunition" works, as a rule, in two cases: when the authorities, forgetting about mine explosion barriers, set the course for falsification and force maiming of the street, or because of the torpedo of the electoral process from the outside.

The descent of yesterday's authorities from the height of the Pechersk Hills was so rapid that no electoral manipulation would slow down the downward movement. This was facilitated by a number of factors: a giant gap between the finalists of the second round, the danger of loss of international legitimacy, intra-system resistance to uncontrollable Bank's law enforcement agencies and, ultimately, the self-isolation of local elites from the active support of the center.

Since the second round of presidential elections, Ukraine is in a state of transit of power. The administrative resource is scattered - its scales are not enough to sell the advantageous new team to the result of parliamentary elections. In the end, the ratings of pro-presidential power grow, as if on the yeast. The shortage of allies in the new convocation of the Council is also not foreseen. Thus, there is no soil on which the temptation of artificial overestimation of indicators can sprout.

So, let's consider the second aspect of the security of the electoral process - the external one. The aggressive Kremlin policy in the region poses a threat to Ukrainian democracy, especially in the "fragile" times of changing state leadership. Nevertheless, it is argued that the direct influence of the RF distorts voting results is not necessary. Moscow refrained from using the full potential of the disruption of the Ukrainian election. All the same, for the fit, a few sticks in the wheels were still stuck. For example, law enforcement officers read: during the first round, attacks were carried out on the server of the Central Election Commission from the territory of the northern neighbor. However, Russia's level of activity in this segment of influence on the electoral process was lower than expected. The head of the Central Election Commission, Tetyana Slipachuk, said: "There were no large-scale hacker attacks at the CEC this time. However, most of us were subjected to serious misinformation attacks in order to delegitimize Ukrainian elections. " The analysts of the Working Group on Combating Foreign Intrusion in the Ukrainian Election Ukrainian Election Task Force also pay attention to the aspect of information campaigns.

It's no secret that Russian federal media have been flooding Ukraine with 24 / 7 for the last five years. The peculiarity of the "electoral" 2019-that year was the transfer of the grip of the Kremlin propaganda into a mode of advocating the agents of Russian influence in Ukrainian politics. After distributing the media and financial and resource support of the Kremlin, the odious politician, Viktor Medvedchuk, as a Gamelsky rat, brought out a good half of the ex-regionals from the Opposition Bloc. As a matter of fact, as part of the presidential campaign, the Kremlin tried to merge all the pro-Russian chemicals of Ukrainian politics into one test-tube. Disagreeable - first of all, deputies rotating in the orbit of Renata Akhmetov - spoke from the positions of the whip. On gingerbreads Moscow stinged. So many influential blue-and-blue figures who carefully planted pro-Russian narratives, in December last year were "chased" by Moscow themselves - were in the sanctions lists of the Russian Federation.

Insiders about the negotiations between the "Opposition Platform" and "Opoplokom" have been lamenting the Ukrainian information resources recently. Not agreed. Obviously, mutual dislikes and mistrust took the mountain, which means that two parliamentary parties will have two columns under the banners of friendship with Russia. Competition on the flank of loyal opposition, which the Kremlin did not manage to pay off (although systematic work in this direction from the Russian side was not conducted), could cause a significant blow to the level of representation of the "triumvirate" of Boyka-Rabinovich-Medvedchuk. It is also worth noting the other side of the medal of centrifugal processes in the pro-Russian opposition: the fixation of the split in parliamentary elections compensates to a certain extent the tendency for the fragmentation of the national-patriotic segment of the electoral map of the country.

However, it would be naive to suppose that the Kremlin's ambitions are limited to the creation of a controlled faction in a new convocation of the Ukrainian parliament, which, moreover, will hold the next years in the opposition reserve. From the height of the tower of the White Stone, this plot looks a little secondary.

Unfortunately, the manifestation of this was the slowing down of negotiations on the release of Ukrainian prisoners, in particular the navy of the Navy, which Russia has kept since the Azov-Kerch crisis. As sociology testifies, Moscow will receive dozens of obedient bosomers in the Council guaranteed. Therefore, from Putin's point of view, playing a card for the release of captive Ukrainians only in order to play their kum in the elections means a lot of cheapness, first of all in front of the West. Moreover, at the opposite end of the negotiating table, instead of Petr Oleksiyovych, who mastered the craft of hybrid diplomacy, a sudden showcase yesterday's showman without a gram of relevant experience. Therefore, the progress on the issue of the return of its citizens to Ukraine, which is criminally detained in Russian shadows, is unlikely to be tied to parliamentary elections.

In the crucible of Ukrainian electoral campaigns, the Kremlin is raising the walls of a political and diplomatic cage, in which it plans to keep our country in the future. The first step is to restore shadow communication between Kiev and Moscow. All the war years between the capitals of Ukraine and Russia, without drying out, flowed underground rocket launchers that fed energy imports from the Russian Federation, regulated bilateral trade, and even contributed to the liberation of Ukrainian soldiers from Russian captivity (the last major exchange took place in December 2017). At the same time, Putin will probably try to preserve Medvedchuk's role as the chief mediator in relations with the Administration of the President of Ukraine, which he played during the reign of Poroshenko.

At the moment, the message of a reluctance to cooperate with Medvedchuk is being heard from the environment of the new head of the Ukrainian state. Even before the election of Zelensky, then the speaker of his staff, Dmitry Razumkov, questioned the effectiveness of the dialogue format in which Putin's protégé was involved. By the way, recently, the press secretary of the President of Ukraine Yulia Mendel recommended the head of the Prosecutor General's Office, Yuriy Lutsenko, to pay attention to the visits of the leaders of the Opposition Platform to the Russian Federation. Here we can cite a number of critical attacks of representatives of "ZeKomanda" in the direction of Medvedchuk, which shows that the position of the authorities remains unchanged.

However, it looks like the Kremlin does not hurry to listen to the message of the new Ukrainian president. In the public sphere, the "forced friendship" with Medvedchuk is accompanied by the imposition of a number of demands on the Ukrainian side, for which Putin is ready to "sell" the Zelensky peace in the Donbass. It is about giving the ORDL a "special status", an amnesty to militants and direct talks with the occupation administration of the pseudo-republics. At such dispositions in the negotiation process, the Kremlin has long been entrenched. In front of the Kiev redoubt built strong hostile fortifications.

Instead, the Ukrainian authorities in the post-election euphoria entered the "gray zone", where they try to find new conditions for a compromise. To the forefront, "called" even the second president of Ukraine Leonid Kuchma. Now he is again a representative of the president in the Trilateral Contact Group in Minsk. In the press Kuchma's return brought about the effect of an information bomb. Special resonance was caused by proposals not to "shoot in response" and to resume transport links and economic cooperation with uncontrolled areas. Immediately, an important clarification was made: the blockade would be lifted if the ruble zone was canceled and the "nationalization" of Ukrainian enterprises was canceled. Actually, this is the whole package of proposals from Kyiv, which was received by the Kremlin as of today. Considering how deeply the so-called "LDPR" in recent years have become into the system of state corruption of the Russian Federation, attempts by Zelensky's environment to "roll back the film" are doomed to a fiasco. The structure of "Vneshtorgservice", which formally stands for the "wallet" of the Yanukovych family, Sergei Kurchenko, has now locked up all the "food chains" in ORDLO, controls the key enterprises. However, in the center of the entire web are more massive spiders than the oligarch-fugitive. Their names often appear in the public space in the context of economic expansion of the Russian Federation. This is Sergey Chemezov, General Director of Rostech and Dmitry Kozak, Deputy Prime Minister of the Russian Government.

So, during the noisy statements of the Ukrainian side, significant changes in the Donbass issue (not to mention the Crimea - here the Zelensky team shows a minimum of activity) should not be expected. At this stage, Moscow is ready to push the militants in exchange for certain economic actions for the occupied areas. To such an end, the Kremlin pushes Kiev through the intensification of hostilities - it is during the first weeks of the presidency of Zelensky that the largest escalation in the front over the past year or two occurs.

But the main vector for attacking Ukraine in the near future remains the energy and fuel sector. Actually, the offensive has already begun with the introduction of an "oil" package of sanctions against Ukraine. In the gas transportation plane Zelensky also expects a difficult test, especially in light of the commissioning of the "Nord Stream - 2" (2020 year).

A voter, who believes that with the change of power in Kiev there is a chance to commemorate the Donbass, is in captivity of pink illusions. In fact, the Kremlin's strategy in the Ukrainian direction remains unchanged, regardless of who will become the owner on Bankova. With the arrival of Zelensky, Moscow's main priority - the blockade of the Euro-Atlantic prospects in Kyiv - has not undergone any adjustments.

In 2014, Russia has changed the tools to hold Ukraine in its zone of influence. The Russian leadership realized that the tactics of corruption of the ruling elite and regional elites from time to time gives rise to a systemic failure - Ukrainian society periodically goes to the Maidan and takes away the power that has plummeted. Therefore, after the Revolution of Dignity in the Kremlin, they chose "B" - to seize a piece of territory, to fuel a controlled conflict that for decades closes Ukraine's road to the EU and NATO. Reliable to these organizations, the rhetoric of Zelensky only assures the Kremlin in the correctness of the chosen policy.

Volodymyr Solovian,
Head of the foreign policy projects of the CACDS