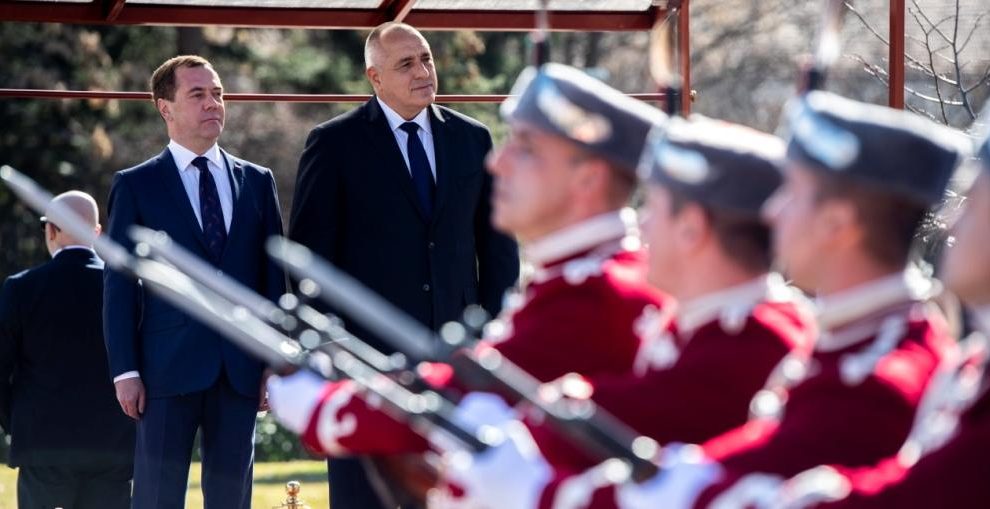 A sequel to Dmitry Medvedev's visit to Sofia

More than a month after the enchanting show organized in Belgrade in honor of the arrival of Russian President Vladimir Putin, the Balkans again received the Kremlin high-ranking official. This time, Russian prime minister Dmitry Medvedev visited Sofia with an official visit. The Bulgarian leadership pinned a lot of hopes on this visit, as it was hoped that it would contribute to the warming of bilateral relations, in particular in its energy sector. However, after the intergovernmental meetings, it became clear that the Bulgarian-Russian visa was still there.

Unlike theatrical performance in the Serbian capital, the Russian premier in Sofia was not so pompous. Perhaps because he is not Vladimir Putin, perhaps because the main partner of the Kremlin in the Balkans is Belgrade, not Sofia, and perhaps because Bulgaria, as a member of the EU and NATO, simply can not afford it.

Moreover, the start of the visit of the Russian prime minister was accompanied by an accompaniment of protest against him, which would be simply unthinkable in the same capital of Serbia. "Mr. Medvedev, did you eat the handle?", "Beginner for the Bulgarian energy sector", "Here is not Moscow", "The one who has saved us will destroy us" - with such slogans met protesters of the Russian prime minister in the center of the Bulgarian capital. Among the interesting "attributes" of these protests are bunches of brooch, which, according to representatives of local law enforcement agencies, was poisoned by Bulgarian businessman Emilian Goebrev. As you know, the research search network Bellingcat has established a connection between the perpetrators of assassinations on him and Sergei Skripal.

Active participants of the event were representatives of the Ukrainian diaspora in Sofia, who, along with blue-yellow flags and banners with the inscription "Stop the Kremlin aggression", reminded of what the high-ranking guest of the Bulgarian capital was involved with.

Interestingly, the Russian delegation arrived in Sofia almost after the visit of NATO Secretary General Jeanne Stoltenberg. During a meeting with him, Bulgarian prime minister Boyko Borisov stressed that Bulgaria is not a "Trojan horse" of Moscow, and one of the most disciplined members of the Alliance. This, however, did not prevent him almost a week later once again assuring his Russian counterpart in readiness of Bulgaria to take part in the energy-geopolitical project of the Kremlin on favorable for the latter conditions.

Dancing around the pipe

Energy cooperation was expected to focus on the central theme of the Bulgarian-Russian negotiations, in particular, on two projects: extension of the Bulgarian territory of the second branch of the Turkish Stream gas pipeline (to Serbia and then to Hungary) and restoration of the Belene NPP construction.

Despite the fact that during the meeting, both the Bulgarian and Russian prime ministers made a number of optimistic statements, they are unlikely to lead to significant shifts in the development of these projects. In favor of this, the fact is that no deal in the energy sector was signed on the results of the visit of the Russian delegation. Instead, Medvedev once again reminded the words he said on the eve of the visit: clear instructions from the European Commission are needed for the implementation of the Turkish Stream-2 gas pipeline project.

In addition to the uncertainty caused by the Brussels factor, there are a number of questions regarding the economic and technical aspects of the Turkish Stream-2 project, the answers to which the Russian prime minister did not give.

There are still doubts as to whether the new pipeline, in which it is necessary to invest over 1,5 billion euros, is fully filled up, and what will be the supply and demand for gas at the entrance and exit from Bulgaria, which will greatly depend on the economic feasibility of the project. There have been no contracts with gas buyers in Bulgaria, Serbia or Hungary. Moreover, in these countries, they do not consume such amount of gas that is planned to be transported through a new gas pipeline (more than 15 billion m³). For example, in Bulgaria itself, the demand for natural gas is about 3 billion m³, of which 1 billion m³ is reserved for Azeri gas from the Shah Deniz field.

Local experts also believe that if the North Stream-2 gas pipeline project is still implemented and through it there will be a significant part of the gas that is currently transported through Ukraine, while the Ukrainian side, in turn, will reduce its transit duties so much, that bypassing its territory will be economically impractical, then the need for the "Turkish Flow-2" may collapse at all.

Instead, it became clear that the Russian side would not participate in the project of the Bulgarian gas hub "Balkans", whose idea is to distribute gas streams from different sources to neighboring countries (which was precisely what he supported the EU at the time). As noted by Gazprom, the company is interested in direct deliveries of gas to its customers in Central and Eastern Europe on the basis of concluded contracts. In other words, there is no intention to allow Bulgaria to trade its gas. The statement of the Russian gas monopolist is important not only because it makes the idea of ​​a gas hub, which the Bulgarian government puts on the stake, simply hopeless, but also because it directly affects the prospects of the Turkish Stream-2. After all, in Brussels it was made clear that the European Commission would not support the project if it was intended only for transit.

APS in a bag

Regarding the participation of the Russian side in the construction of the Belene NPP, the Russian prime minister confirmed Russia's readiness to consider its participation in the project, but noted that everything would depend on what the tender conditions would be. That is, as in the case of the Turkish Stream-2 gas pipeline, there is no specifics. At the same time, he did not forget to reproach the Bulgarian leadership that its previous refusal to construct a nuclear power plant was an example of no need to work - "money paid, money was spent, nothing was done, and there were a lot of money." Under a considerable amount of money meant the 600 million dollars paid by Bulgaria to Russia for two new nuclear reactors that are still in the factory packaging at the construction site in Belene. In general, since the start of the project, Bulgaria has already spent about 1,5 billion euro on it.

In the near future, the Bulgarian government is planning to hold a tender and declares interest in the project by a number of potential investors. Interestingly, these potential investors will have to be ready to join the project, provided that they are built on market conditions and in the absence of state guarantees from Bulgaria, as well as without guarantees of long-term contracts for the purchase of electricity. In view of this, Bulgarian experts are rather skeptical of the financial and economic model of the Belene NPP project and believe that it will be difficult to attract investors without state guarantees.

Somewhat in the shadow of the energy theme was an equally important meeting of the Russian prime minister with the head of the Bulgarian Orthodox Church, Patriarch Neofit and some other representatives of the Bulgarian high clergy. Among them are Vienna Metropolitan Daniel, who represents the pro-Russian wing of the BPC. There is no need to be a visionary to guess what the purpose and theme of the meeting between the Russian prime minister and the Bulgarian patriarch was. The Russian prime minister simply could not take the opportunity to meet the leadership of the BPC in order to once again explain to him which position should be taken by the CPC in matters of recognition of the Orthodox Church of Ukraine and the confrontation of the ROC with the Ecumenical Patriarchate.

In general, the recent visit of the Russian prime minister to Bulgaria did not mark a breakthrough in bilateral relations, in particular, where they were most expected by official Sofia. Despite the regular joint statements about the interest in passing the "Turkish flow" through the territory of Bulgaria and the continued construction of the Belene NPP, the fate of both projects remains uncertain.

Putting Sophia homework more actively lobby against Brussels a new gas pipeline, the Russian prime minister took the course to Luxembourg. And in Sofia, they switched to the upcoming European elections, which, by the way, may also give an answer to the question whether the second branch of the "Turkish Stream" will go on the Bulgarian territory.

Togrul Ismail: "Idlib - chances to negotiate or Russia and Turkey on the threshold of a new conflict?"