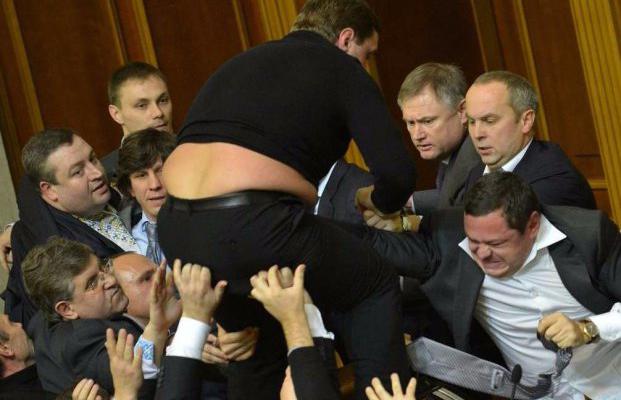 Ukrainians often set as an example competitive economies and consolidated democracies of the Central European countries and those of Baltics. It is accepted to explain the privations of Ukraine not only be decades of burden of the Soviet system, but also by at least three centuries of Russia’s predominance. There exists a lot of reasons and explanations of the centuries-old stay under protectorate of neighboring countries, but, in my opinion, the most profound factor here is a problem of elite-building.

Every postcolonial society faces a similar challenge, since it is impossible to do away with the authoritarian past without updating of elites. The newest history shows that democratic elections are the most effective tool of relevant transformation of power. Moreover, the practice of a number of countries certifies – if the former ruling class has completely discredited itself by non-fulfilling of obligations, undertaken to its own people and by undemocratic methods of rule, it is expedient to “clean” the cabinets of power through the mechanism of changing of power in a democratic way.

Favourable pre-conditions for further formation of nationally oriented political elite in Ukraine were folded in a result of the Revolution of Dignity. On a historical scale, only a moment has passed. But it is today, under dismantling of the post-Soviet system of orientations (often quite painful), the Ukrainian society feels especially urgent need to set-up and protect the conditions for circulation of political elites.

To answer the mentioned question, I consider it expedient to reconstruct the character of the Ukrainian political elite.

Pseudo-elites are situational actors on the stage of politics and behind the scenes: their activities are temporary, as a result of unsystematic, sometimes even chaotic character. This category may include certain public activists, integrated into the political elite by the fate of the case, but not in accordance with the real level of competencies.

The third component, post-elites, is the rudimentary elements in the system of power, which capture the succession of the current quasi-elite from the leadership of the Ukrainian SSR. The fact that a lot of former party Communist and Komsomol members still remain in active politics shows the selectivity of lustration as an emitting effect with the main task of preventing the emergence to power of new political faces.

It would seem that the Revolution of Dignity and election campaigns of 2014 should have launched the circulation of elites on fundamentally new principles. But in practice, we see that the composition of the ruling class has undergone only point changes, and then mainly due to the reorientation of different groups of influence within the structure of the old elites. The elections, though they gave a ticket to a large policy to a limited number of progressive forces, have largely played the role of intra-elites rearrangement of forces. Instead of a personnel update of power in the wake of the revolution, we have witnessed the imitation of this process.

The opacity of the recruiting procedure of the political elite leads to the formation of political elite of the closed type. The construction of the Ukrainian statehood is carried out in a “shadow” regime, in remoteness from public. As an example, one can cite the current stage of the Constitutional reform, which is characterized by virtually lack of discussion on draft amendments to the Basic Law of the State with a society, – the people who are the source of power, according to the Constitution of Ukraine.

The clan-corporate interpretation of national interests is not a mere feature of the current quasi-elite. At various historical stages of the difference in interests of the elite and the state, the Ukrainian ruling class has decided for its own benefit, neglecting the state values, betraying the Ukrainian people in pursuit of personal benefits. Such a “behavioral model” the national political elites have reproduced on the memory of every generation of Ukrainians. My point of view completely coincides with the thought of Arnold Toynbee who stated that the inability of the elite to find an adequate response to the current challenge results in a decay of civilization with its further inevitable fall. As an example, the USSR de jure collapsed 26 years ago, but de facto it has collapses right now and namely by the post-Soviet elites.

It is also fair to note that for centuries the Ukrainian elites have been «washing away» from their native land by imperial metropolises. At the particularly dramatic stages of state-building, we observe the almost complete absence of national dominant layers. Vilfredo Pareto considered history as a «graveyard of aristocracies». The stained glass of Ukrainian history contains plenty of plots that illustrate this statement. As a result, the inheritance of the Ukrainian political elite has become fragmentary, and white spots are noticeable with a naked eye on the background of its historical memory. It resulted in the loss of an organic connection with other social starts. That is why, chronic distrust of power has erupted in the Ukrainian mentality, regardless of from where it is carried out – from the center of its own state or from outside.

Finally, I have to state the poorly expressed ideological and valued orientation of the political elite in Ukraine. The lack of theoretical comprehension of the processes that take place on the internal and external arena, the inability of the domestic political elite to establish a clear system of coordinates on the external and internal arenas casts aside the country into a pool of objects of international politics. So the question of whether the current ruling class of Ukraine meets the requirements of time cannot be answered affirmative.

The current turbulent times generate the need for qualitatively new political elite that is vitally necessary. Sociological studies have shown that 60% of Ukrainians are waiting for the emergence of the new Ukrainian politicians with a new system of relations between man, business and the state.

The mobilization model of elite-building inherent in Ukrainian history (princess’s troops, Cossack petty officer, party nomenclature) recurred during the Revolution of Dignity (self-defense of Maidan, Avto-maidan, national activist network) and in Donbass (volunteer battalions, organization of volunteers and veterans of the Anti-Terrorist Operation). No wonder it is volunteers who have the highest credit of trust among social institutions (a similar positive attitude among the Ukrainians belongs to the Armed Forces of Ukraine and Church). Therefore for today a powerful potential elite has formed in Ukraine as a network of citizens who are ready to implement their social influence, however they don’t have yet the opportunity to realize this influence in real life.

Conscious of the lack of public trust, in order to preserve their positions on the eve of the 2019 election campaigns, the Ukrainian authorities create “stand-by” elite – the political-technology projects of the presidency of popular Ukrainian singers or comedians.

Why the Ukrainian quasi-elite succeed to quite easily manipulate public consciousness? Mainly through control over mass media. The media (mostly television) play a key role in the political communication of the Ukrainian society. Hence, elite groups, that have monopoly control over the media, form discursive practices with the help of which the potential elites are ousted on the side of a road of political life of the country.

Young people form the core of potential elite in Ukraine. Incorporation of Ukraine to the pan-European humanitarian area tirelessly strengthens the position of the young counter-elite (granting to Ukraine visa-free regime with EU is a positive factor in this context, as well as the fact that more and more young Ukrainians will get education abroad). This category of citizens is “organic” and at the same time irreconcilable opposition to the quasi-elite. Their motivation lies not in the sphere of political persuasions, but in desire to use their main resource – knowledge for the implementation of democratic institutional transformations in Ukraine. Therefore, the key asset of new elites in Ukraine is not financial capital or primitive populism, but public authority based on a high level of competence.

The process of updating the political elites in Ukraine has not yet gained enough momentum to catch up on the radar of Western leaders’ thoughts. However, I have no doubt – changes in the structure of the Ukrainian authorities are inevitable and will soon take place.

Member of the Expert Board at the CACDS