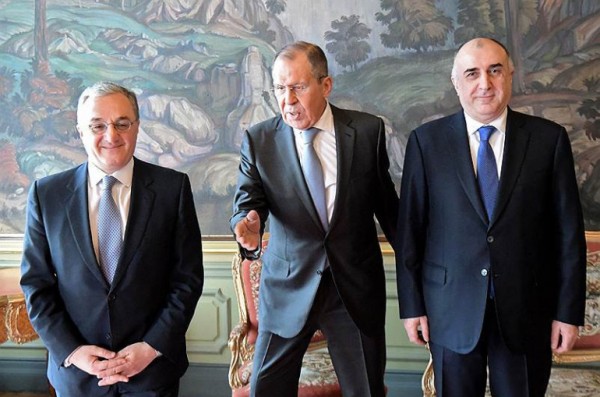 The April 21, 2020 statements of Russian foreign Minister Lavrov brought back Nagorno Karabakh issue to the forefront of expert discussions. However, Russian foreign minister did not reveal something special or unexpected. He just reiterated what pundits following the conflict settlement process had already known. Since May 2018 negotiations have been based on phased approach. It envisages return of some territories to Azerbaijan and indefinite postponement of the determination of the Nagorno Karabakh final status. This algorithm was first offered by OSCE Minsk Group Co-Chairs in late 1997, and then was reinvented again in 2004. The parameters of solution were partly disclosed by the OSCE Minsk Group Co-Chairs July 2006 statement. The full text of the basic principles was publicized by the US, Russia and France Presidents’ July 2009 statement. Everything in negotiation process (Kazan document, Lavrov plan) is based on this logic.

However, Mr. Lavrov’s statement immediately put Armenian authorities in defensive. Since May 2018 Armenian new leadership has multiply rejected the fact of negotiations, arguing that they have been involved in consultations. Despite initial attempts to counter Mr. Lavrov, eventually Armenian authorities have accepted the existence of negotiations. During his May 6 speech in Armenian parliament Prime Minister Pashinyan stated that Government negotiated what it deemed necessary to negotiate. On May 16, during his online press conference Prime Minister complained that some forces inside Armenia attempt to put restrictions on legitimate Armenian government during the negotiations.

Meanwhile it’s worthy to understand the strategic interests of Russia in current phase of Karabakh conflict settlement proces. Kremlin seeks to use the conflict settlement as a way to strategically increase its influence over Azerbaijan. The best way to reach that goal is the de-facto establishment of the Russian military base in Azerbaijan under the umbrella of peacekeeping forces. Russia is particularly interested in controlling part of the Azerbaijan – Iran land border. This will provide Russia secure land access to Iran and will increase Russian overall influence in the Middle East. Obviously Azerbaijan will never agree to host an official Russian military base but may be forced to accept Russian peacekeepers. Russia overtly offers Azerbaijan the return of some territories currently under the control of Nagorno Karabakh as a prize.

Meanwhile, it should be noted that the failure of Armenia and Nagorno Karabakh to implement any meaningful project of populating these territories has put them into geostrategic vacuum and Russia simply intents to exploit that vacuum to advance its national interests. If Armenia could significantly increase the number of Armenians living in those territories, he would send clear signal to all external players involved in the geopolitics of the South Caucasus that the only way to have influence in these territories is the negotiations with Armenia and Nagorno Karabakh. Armenia has failed to achieve any meaningful progress here and thus opened the door for external players’ involvement.

Mr. Lavrov statement proves that Russia believes time is ripe to accelerate the process. Until recently Azerbaijan has rejected Russian offers, but it seems that now Baku is willing to seriously consider them. Azerbaijani President Aliyev publicly agreed to “recent Russian offers” during 2020 Munich security conference. Probably the reason behind the change of Azerbaijani attitude is the dire economic prospects. Azerbaijan has not fully recovered after 2015 economic crisis yet and March 2020 oil price collapse will exert additional pressure on Baku. Given the failed attempt to solve the problem by military means in April 2016, Azerbaijani leadership could come to the conclusion that the return of some territories through Russian mediation is the best available option for the foreseeable future.

Iran was and is opposing any change in Karabakh status quo. However, Tehran faces enormous internal and external challenges and has no sufficient resources to counter the advancement of Russian goals. Another external player, the US, was opposing the deployment of Russian peacekeeping forces, as it contradicts the Russia containment strategy in place since 2014. However, the White House is fully in pre-election mode focusing all its efforts to promote COVID – 19 related China blame game and Obamagate as effective strategies to secure the re-election of President Trump. Thus, at least on executive level the US may not provide necessary attention to the South Caucasus at least till the end of 2020. Thus, Russia seems to believe that she has a short window of opportunity to change the status quo in Karabakh.

This creates tough situation for Armenia. The phased approach to settle the Karabakh conflict promoted by the OSCE Minsk Group Co-Chairs is based on the “Land for promise” formula. It means capitulation for Armenia and is not acceptable for absolute majority of population of Armenia and Nagorno Karabakh. Meanwhile, due to the different reasons there is a sense of growing deterioration in Armenia – Russia relations, which further narrow the room for maneuvers of Armenian leadership. Kremlin may threaten to create an internal political crisis in Armenia if government rejects its offer. Meanwhile, any actual step to accept the “Land for promise” formula will immediately bring about serious domestic instability in Armenia with unpredictable implications. Simultaneously, Azerbaijan is ratcheting up its military pressure campaign. On May 18 Azerbaijan launched large-scale operational-tactical military drills, while Hikmet Hajiyev, the foreign policy advisor to the President of Azerbaijan, stated on May 14 that Azerbaijan has run out of patience and will not allow Armenia to use negotiations as a tool for preserving the status quo.

However, considering Russian priorities in the region we may assume that the top priority is the deployment of the de facto Russian military base in Azerbaijan. The possible change of government in Armenia is not urgent task for Moscow. Kremlin strongly believes that regardless who is in charge of Armenia, Yerevan has no options to quickly ditch Russia as the existential threat from both Azerbaijan and Turkey will not disappear and it would be tremendously difficult to find new sources of security guarantees for Armenia. At the end of the day, Turkey will continue to be Russian rival in the South Caucasus for the foreseeable future and Armenian and Russian strategic interests will remain aligned. The best option for Moscow would be the parallel realization of two tasks – current Armenian leadership accepts the Russian offer, peacekeepers is being deployed and than Armenia proceeds through government change as a result of domestic protests against the government decision. However, probability of this scenario is unlikely as it would be extremely hard to force Armenian leadership to accept it.

Most probably, Russia will concentrate its efforts to achieve the goal of peacekeepers’ deployment along Azerbaijan – Iran border through implementation of the phased approach in Karabakh settlement process. Given that Armenian government will not accept “land for promise” offer, it seems that the only option to reach this goal is the launch by Azerbaijan the large-scale military activities against Nagorno Karabakh and the deployment of peacekeepers as the way to stop the war. The recent belligerent Azerbaijani rhetoric proves that Baku actively discusses this option.

The launch of large-scale military activities against Karabakh may result in deployment of Russian peacekeepers, but quite possible the location may be different from Azerbaijani perceptions. As a result of the new war Azerbaijan hopes to retake the control of the 135 km long Iran – Nagorno Karabakh border and to allow the deployment of Russian peacekeepers along that territory. However, another scenario is quite possible. The army of Nagorno Karabakh successfully repels the Azerbaijani attack and move forward along Azerbaijan – Iran border. This scenario may result in deployment of the Russian peacekeepers, but not along the Nagorno Karabakh – Iran border, but deeper into Azerbaijan, alongside the current Azerbaijan-Iran border. Interestingly, from point of the Russian strategic interests there are no big differences here. In this scenario Russia achieves all its goals: there will be the de facto Russian military base in Azerbaijan, Russia will control parts of Azerbaijan – Iran land border, and Russia will secure land access to Iran.