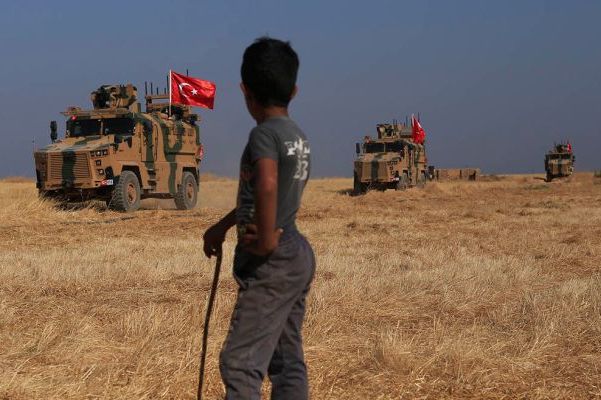 The eight and half years of Syrian conflict saw different, sometimes very strange ups and downs. Everything started as an uprising against authoritarian state with demands for democratic reforms. Later situation was transformed into civil war with growing influence of foreign fighters. In 2014 Islamic State entered the stage making President Assad less evil for the West. Then Russia intervened militarily and changed the course of the war effectively saving Assad. In 2016 and 2018 Turkey launched two military operations taking under its control parts of Northwestern Syria. However, after the eight years of conflict and sufferings situation was stabilized with four clear zones of influence. Approximately 70 percent of country is under the Government control with tangible Iranian and Russian support, 20 percent was under the control of Syrian Democratic forces led by Syrian Kurdish YPG fighters (whom Turkey perceives as terrorists) supported by the US, and remaining 10 percent was divided between Turkey, Turkey supported rebels and some remnants of different radical Islamist groups.

Thus, conventional wisdom was telling that Syria has entered the phase of the low intensity conflict with no major changes possible on the ground. Then, at the beginning of October situation was changed dramatically. The US, after negotiations with Turkey, stated that will withdraw its forces from Northeastern Syria and will not prevent Turkey’s incursion. Only days after that deal Turkey has started its military operation against SDF forces seeking to establish security zone along the 480 km part of Syrian – Turkey border. Kurdish forces accused Americans of betrayal and made a quick deal with Government forces allowing them to enter the SDF controlled territories. The US is prepared to impose sanction on Turkey for allegedly crossing some red lines and European states are blaming Turkey and demanding to stop the operation.

We may only guess what the key reason of this unraveling geopolitical drama was. Some argue that President Trump simply wants to fulfill its campaign promises to end the endless wars and bring American troops home, others believe that the US master plan was to create tensions between Turkey, Russia and Iran and undermine Astana process, but most importantly to drove a wedge in Ankara – Moscow relations and made Moscow bogged down deeper into Syrian crisis. Another group of pundits are arguing that situation is more favorable for Russia as she is the only power who has partner relations with Turkey, Iran, President Assad and also connections with Syrian Kurds and after the US withdrawal from Northeastern Syria is the only power broker who may exploit differences between various partners to secure its vital interests.

As for Turkey, Ankara continues to expand its de facto control in Northern Syria. Given the fact that starting from the establishment of the Turkish Republic Ankara was never happy with its borders with Syria and Iraq and there are clear tendencies within President Erdogan inner circle to revive the glory of Ottoman Empire, military incursions into Syria may well serve the long term strategic goal of Turkey to establish its de facto control over the northern parts of Syria.

Regardless of the true reasons of recent mess in Northeastern Syria, some assessments may be done which could be useful also for Armenia in its short and mid term strategic calculus. The key is the fact that you should never overestimate the hard security guarantees provided by your allies and should seek to keep minimum level of balance of power with your adversary.

If it’s not possible, like in case of Syrian Kurds vis-a-vis Turkey, you should have multiple guarantors not be put under the direct threat of physical extermination.

Projecting this situation to the South Caucasus, Armenia should always keep a minimum necessary level of balance of power with Azerbaijan to be able to rebuke any large scale offensive without any external support. As for Turkey, it is better to have multiple guarantees and not to rely only on Russian military base and CSTO agreement, which effectively is Russian guarantee too. If this is not possible, you should do everything you could not to jeopardize or ruin your relations with Russia.

Another key conclusion which should be derived from the current situation in Syria is the volatility of any agreements and regional security architecture mechanisms. Even most solid security architecture can be ruined very quickly and Armenia should be ready for such catastrophic scenarios. The stable alliances can be undermined and new alliances can be established. Thus, Armenia should monitor the regional security dynamics very carefully and develop robust state capacities for strategic forecasting.

Another key lesson which Armenia should take is the necessity to clear differentiate between vital and non vital interests. Syrian Kurds’ vital interest was the provision of physical security of population while the establishment of Kurdish autonomy in Syria resembling Kurdistan Regional Government in Iraq was an important but not vital one. In recent months Russia was offering Kurds to launch negotiations with President Assad government and let government troops into Kurdish controlled areas as a guarantee of physical security of population against possible Turkish attacks. However, this was rejected as a step undermining the prospects of Kurdish autonomy in Syria. Meanwhile, after Turkey’s incursion, Syrian Kurds had to negotiate with President Assad in much worse conditions and eventually came to the decision offered by Russia before the resumption of hostilities.

As for Armenia, Yerevan should differentiate its vital and non vital interests too. The vital interest for Armenia is the protection of territorial integrity and the physical security of population of Republic of Armenia and Nagorno Karabakh Republic. Any changes in the territorial integrity of either Armenia or Nagorno Karabakh Republic will put physical security of both Karabakh and Armenia population into the risk. Thus, any strategic decision regarding Armenian foreign policy, its relations with significant players involved in the regional geopolitics must be taken with one key goal – to secure the territorial integrity of Armenia and Nagorno Karabakh Republic. Armenia should construct its relations with foreign powers on clear understanding who may support this goal, who may have neutral position and who is prone to undermine it. Thus, recent developments in Northeastern Syria once more proved that small states located into the geopolitically volatile regions should calculate the impact of their foreign policy decisions very carefully not be caught by strategic surprise.