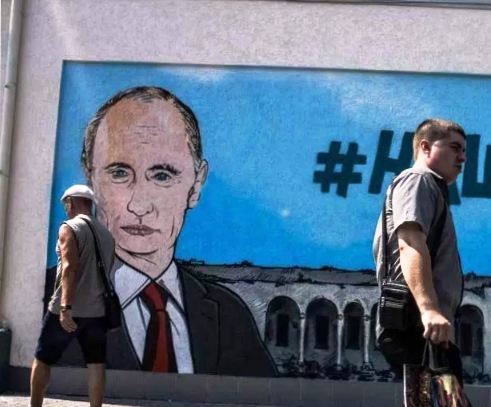 We hear a lot about Fake News. Fake Words have been around even longer, but are less publicly celebrated. Yet they matter at least as much as “Alternative Facts”—or maybe more, as they are often written or said unconsciously. A set of them is regularly used in and about Russia.

The experienced Australian analyst John Besemeres has described a “blindingly obvious” truth in his recent book of essays on Russia and East-Central Europe, A Difficult Neighbourhood. He wrote of Moscow’s objective being explicitly to achieve a dominant position for itself on the Eurasian continent not as a modern, securely post-imperial and enlightened power, but as a hyper nationalist neo-Soviet state. This is evidently a conclusion he has come to over time and reluctantly. The West still in his view has failed to face up to it adequately. Besemeres’s account of the central importance of Russia’s lengthy, continuing and brutal effort to reduce Ukraine to abject obedience has formed a critical but by no means isolated demonstration of his contention.

Many, perhaps most, Western analysts and many Western political leaders use a different language. This has tended over time to reduce Ukraine and other formerly Soviet states to the objects of a struggle between East and West rather than one most obviously between, on the one hand, countries like Ukraine (and Georgia) that are moving toward re-forming themselves into nation states and, on the other, a Russia dedicated to preventing any such thing. The analogy with the emergence of nation states in the 19th and 20th centuries from the decay of European and Ottoman imperial states is, seen in this light, a better illustration of the realities troubling European security than one stemming from Cold War perceptions.

I have highlighted words of ambiguous and by extension fake coloring here and in what follows. East and West, for instance, could have been singled out in this way earlier. These first three highlighted and commonly used concepts instantly conjure up the misleading image of a continental struggle between two armed camps. Tension between Russia and other states is however in the first place the result of Moscow’s policies towards it neighbors, not a pre-ordained and concerted Western policy of besieging Russia.

The Kremlin narrative is of course different. It is based on the outcome of World War II as seen and indeed increasingly insisted on by the Kremlin, and buttressed by inherited Tsarist as well as Soviet root beliefs. These include a conspiratorially minded fear of the West. Russia claims a sphere of influence. In a general sense, of course it has one. All countries do. Russia is, like other countries, also exposed to outside influence, whether beneficial or harmful. Ukraine’s civic society would, potentially at least, be a good stimulus for a Russia still held in check by a Kremlin whose rule is more akin to that of the disgraced Yanukovych than one devoted to the wider interests of its subjects. But when the Kremlin claims a sphere of influence or interest it means that its natural right and objective is to establish and defend a zone with clear and, if necessary, expanding boundaries over which it has control and from which outsiders and their ideas are excluded.

Other widely used formulations have a particular meaning when used by Russian spokesmen. Russia asserts for example that its national interest in enforcing its sphere of influence should be respected as paramount by those inside its confines and those outside it, or else… Moscow is after all the capital of a Great Power, and one ruled by a Strong Man. These claims are taken seriously, though not always explicitly, by numbers of foreign observers. Russia, we are for instance warned quite often, must not be provoked. But are Russia’s longer-term interests really best served by neo-imperialism? A wider definition of the country’s national interest than one of forcing its neighbors into subjection would serve its own citizens better. There is no such thing as being or becoming a “great power” in the abstract, and “strong men” cannot last for ever without falling prisoners to their past policies and the sycophancy of their courtiers.

The arguments that Russia must not be provoked or that its isolation is undesirable are valid for other countries as well, Western countries not least. So, too, in the same general sense are calls for engagement and dialogue. But these objectives and the accompanying wish for good relations with Moscow are empty without the Kremlin pursuing them as well. That would require Moscow to respect the interests of its intended vassals, and to accept that European and wider security objectives cannot be met without mutual accommodation within a group of like-minded nations, not on the basis that might is right. As things stand, it is the Kremlin which has isolated itself, not a malignant West. Those calling for engagement or dialogue generally mean by these terms, at least by implication, that other countries should either accept or put to one side as givens Russian breaches of what has until recently been fundamental to European security, for the sake of possible progress in other areas. Such accommodation would also apply to what have in the very recent past been described by authoritative Western persons as war crimes.

It is urged in support of the argument for accommodating ourselves to Russian adventures that we have to deal with Russia as it is. A truism, to be sure: Only a fool would argue that we must deal with a fantasy Russia. But like many truisms, the phrase has a variety of possible meanings. Russia is something now, has been something else in the past, and will be different in the future. Treating it with respect, another widespread policy recommendation, would not entail dealing with Russia as it is, unless one is to believe that passing by on the other side of its misdemeanors and ingratiating oneself with its leaders are marks of respect. True respect is something earned by virtue, not fear.

General Washington in his Farewell Address as President said, “Religion and morality are essential props. In vain does that man claim the praise of patriotism who labors to subvert or undermine these great pillars of human happiness.” We might not use quite this language today but the underlying point remains cogent. We need to be clear what the Russians—or more accurately official Russians—have in mind when they use the words they do in describing their interests. We need also to be clear to ourselves as well as to them in describing our hopes of working effectively with them. Insofar as we allow concepts informed by the habits of the past to dominate our approach we labor under the illusion that accommodating ourselves to the Russian narrative will lead to our resolving present difficulties. It will not. The struggle between Ukraine and by extension other formerly Soviet states, on the one hand, and today’s Russia, on the other, will not be resolved by Moscow’s forceful absorption of their territories. Western ideas of bargains with Russia based on sacrificing the interests of states or nations with populations intent on determining their own futures would not work either, to say nothing of such proposals shaming the values we claim to hold. Nor would they even necessarily gratify Putin’s Kremlin for long, let alone enable it to face up to the mounting problems that have arisen under his long rule.

Andrew Wood is an associate fellow of Chatham House and a former British Ambassador to Belgrade, and subsequently to Moscow (mid 1995–early 2000).

Russia and the West