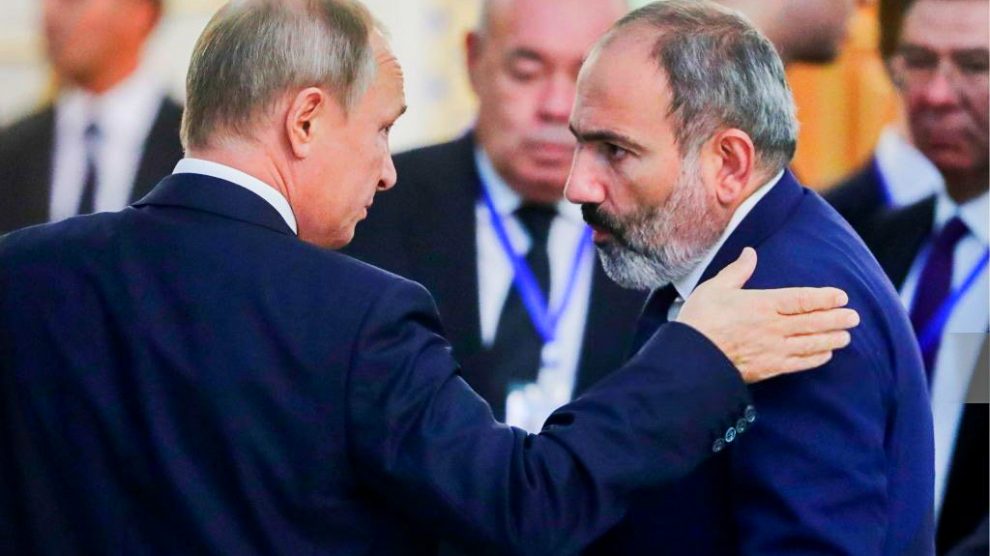 Since 2018 “Velvet Revolution” in Armenia one of the hottest debates among pundits dealing with South Caucasus is the future of the Armenia – Russia relations. The new Armenian leadership has stated in many occasions that no strategic shift in Armenian foreign policy is prepared and Armenia still values its strategic alliance with Russia. Simultaneously, Armenian Foreign Minister recently declared the sovereignty as one of the three fundamental foreign policy principles of Armenia. Given the widespread perception in Armenia, Russia and the West that Armenia before the “Velvet Revolution” was gradually becoming a client state of Russia, this principle may be interpreted as the intent of Armenia to review its relations with Moscow and put it in more equal grounds.

Meanwhile, according to the many Western experts the genuine democratization of Armenia will inevitably create tensions and weaken strategic alliance with autocratic Russia due to the gap of the values and principles. Though it should be noted that the same experts give no credible explanation of why we are witnessing deepening of US – Saudi Arabia strategic alliance with much wider gap between two states systems.

Meanwhile, if we take aside political statements and propaganda, we will notice some facts pointing to some scale Russian discontent regarding Armenia. The two key messages sent by Russia were the increase by 10 percent of gas price in January 2019 and growing hints that another increase may become reality in January 2020. Another sign was the statement by the Russian Transport Ministry that Moscow may cancel the 30 year concession agreement signed in 2008 regarding the management of Armenian railways by Russian Railway Company. As for now, there are no signs of any tensions in military – technical cooperation sphere and according to public statements Armenia will receive the first 4 SU – 30 SM military jets either at the end of 2019 or at the beginning of 2020.

However, even small increase in gas price may create complications for Armenian economy and worsen the socio-economic situation in the republic. It should be noted that despite the 10 percent increase of wholesale price in January 2019 both population and businesses continue to pay the old price. This was possible through reduction of losses and other steps undertaken by “Gazprom Armenia”, the sole owner of domestic gas distribution network which is 100 percent subsidiary of Gazprom. However, in case of additional price increase in January 2020 it would be almost impossible to overt the gas price hike. Given the fact that Armenia produces approximately 40 percent of its electricity using gas this scenario will bring changes in electricity price too which may create domino effect fostering inflation.

Of course, these developments will not immediately ruin Armenian economy and negative effects will take time to be felt. However, they will make Armenians poorer which could contribute to the decline of the current leadership popularity. The cancellation of railway concession could also be painful. According to the agreement, the Russian railway is an owner of all wagons and locomotives, which means that Armenia may simply remains with no trains and will be forced to rent them from Russia which inevitably will increase transportations costs. However, it should be noted that railway saga also will have no immediate catastrophic effects, but will make life of ordinary Armenian citizens a lot more difficult.

What are the reasons behind these Russian messages and if there are real complains within Russian leadership concerning the Armenian policy after the Velvet revolution, why we are witnessing relatively mild and slow actions by Russia.

There are three key reasons which may create some sort of distrust towards Armenian leadership in Kremlin. The first is the criminal investigation launched against the second President of Armenia. And main point is not perceived or real personal friendship between Kocharyan and Russian President. The second President of Armenia is viewed in Russia as a person who made significant efforts in fomenting Armenia – Russia strategic alliance and criminal case against him may be perceived as an indirect step against these relations.

Meanwhile, the main indictment against Kocharyan of overthrowing constitutional order during March 1, 2008 events may raise concerns in Russia too. From Moscow perspective, the March 1 events in Armenia may be equivalent to another “Color Revolution” attempt in Post – Soviet space after the 2003 “Rose revolution” and 2004 “Orange Revolution”. Thus, from Russian perspective, the second President of Armenia thwarted “Color revolution” simply being more successful than Leonid Kuchma and Viktor Yanukovich in Ukraine in 2004. Given the obvious hostile attitude towards “Color revolutions” in post soviet space within Russian leadership, the criminal case against “successful fighter” should not make Russia happy and may raise some doubts regarding the real intentions of Armenia’s current leadership.

The second reason is the pre-Revolution political activities of some members of current leadership. Russia may think that strategic ally should avoid form appointing in some key positions persons who at least previously had clear anti-Kremlin attitude. Of course, we also should admit that Armenian political establishment, as leaders of independent state has all rights to appoint anyone eligible to any positions inside Armenia and no other state has anything to do with it. However, Russia may believe that these are at least not friendly actions which require some countermeasures.

The third reason is the criminal investigation against South Caucasus Railway Company (Armenian railways). Here again narrative has two sides. Armenia urges that its actions are totally within the fight against corruption and no other actor can be against it or try to thwart it. However, Russia may think that some scale corruption is everywhere, even in Western countries, thus fight against corruption is only a pretext to create obstacles for Russian companies working in Armenia.

Now let’s try to explain the relatively mild and slow actions from Russia. Russia as for now has mainly hinted on possible actions which will have long term impact and will not bring about quick and significant consequences for Armenia. There could be two key reasons. The first is the fact that Armenia is not among Russia’s top foreign policy agenda and negative changes in Armenia are not perceived as threats to vital Russian interests. This means that only tiny portion of Russian foreign and security policy apparatus is involved in dealing with Armenia. Thus, there is a no urgent push from the highest level of political leadership to deliver suggestions aimed at quick changes of situation.

The second reason is Russia’s growing understanding that she should not antagonize the neighborhood societies. The Georgian example has shown that Russia has capacities to contribute to the demise of not friendly leader. However, though since late 2012 there is a Russia neutral administration in Georgia, the recognition of Abkhazia and South Ossetia independence has fomented a very negative image of Russia within large portions of Georgians society. The June 2019 events in Tbilisi have proved that Georgians have not forgiven Russia and this animosity most likely will outrun the current Georgian leadership.

In case of actions threatening Armenian vital national interests Russia simply will create another hostile society in its immediate neighborhood which will have only negative impact on Russian regional interests. Most probably, Kremlin understands that while pressing leaders, it should not touch the sensitive strings of Armenian nation. Thus, at least in the short term perspective most probably Russian will seek to put some pressure on Armenian leadership but will be quite cautions not to cross red lines of Armenian society.