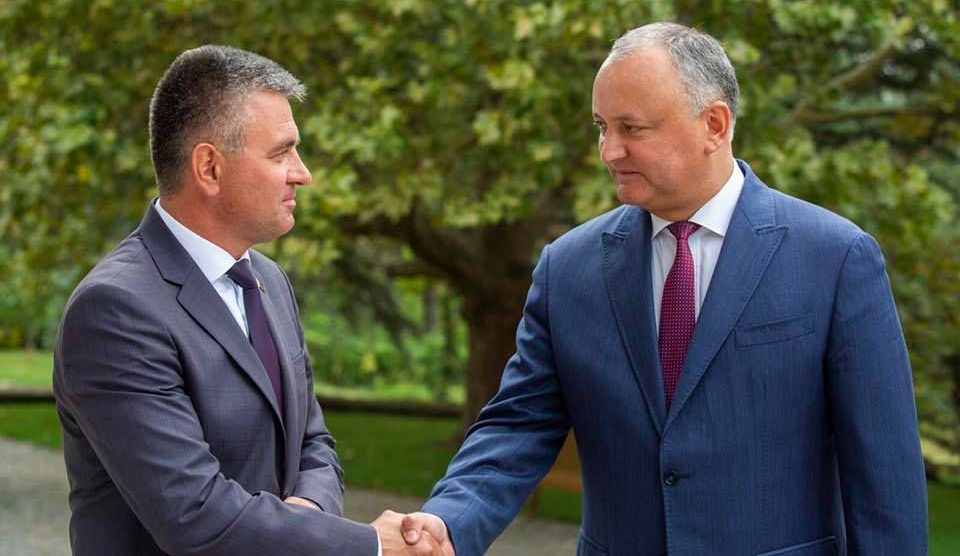 On the eve of the presidential election in Moldova, incumbent President Igor Dodon found himself in a situation where the fate of his re-election for a second term will depend not least on the votes of those living on the other side of the Dniester. The price for Moldova for such a lifeline for its president is the further legitimization of the pro-Russian separatist entity on its territory.

On July 28, Moldovan President Igor Dodon met with the head of the self-proclaimed Transnistrian Moldavian Republic, Vadim Krasnoselsky, at his residence in Kondrica.

In addition to Igor Dodon, the meeting was also attended by representatives of the Ministry of Integration, the Ministry of Economy and Infrastructure, the Presidential Administration, the National Bank, as well as advisers on economic issues and reintegration.

According to official reports, the main issues on the agenda of the meeting were: quarantine posts of the Transnistrian police located in the security zone, telecommunications, banking system, opening of the trolleybus line "Bendery-Varnytsia-North", as well as criminal prosecution.

After exchanging greetings, the heads of delegations held a traditional tete-a-tete conversation. The working conversation of the presidents took place during a walk around the residence.

It is noted that this is the seventh meeting between Dodon and Krasnoselsky since their election.

Speaking of this meeting, there are two main points.

First - the very fact of holding this meeting, which, as already mentioned, is for Dodon with Krasnoselsky seventh. The fact that the Moldovan president invites and receives representatives of the separatist region's administration and holds formal talks with them shows that the current government in Chisinau continues to confidently follow the path of legitimizing the separatist entity in Moldova and its leadership. Such actions by Dodon, together with the Kremlin-imposed plan to federalize the country (a commitment to which, I must say, is not hidden by either Dodon himself or his Socialist Party), may ultimately lead to the fact that it will be de facto not guided by Chisinau, and from Tiraspol.

In this context, it should be noted once again that the current relations between official Chisinau and Moscow-controlled Tiraspol are exactly what the Kremlin wants to see from Kyiv and Donetsk with Luhansk. In other words, the relations between Chisinau and Tiraspol are a clear example of how the Ukrainian authorities should not build relations with Russian puppets in Donbas. It is enough to at least closely monitor what the authorities of the neighboring state are doing and not to repeat its mistakes.

As expected, Dodon's meeting with his Transnistrian "colleague" provoked an extremely negative reaction from the Moldovan democratic forces. Thus, the chairman of the Dignity and Truth (DA) party Andriy Nestase condemned the behavior of Dodon, who called Krasnoselsky "the president of Transnistria" during the meeting. According to him, the fact that the President of Moldova held discussions with the so-called leader of the Transnistrian region on an equal footing is immoral, illegal and contrary to the Constitution and the interests of the Moldovan people. Representatives of the party stated that they would file a complaint to the Prosecutor General's Office.

The DA also said that "with its suspicious and immoral visits to Kondritz, Dodon is creating the necessary conditions for the opening of polling stations in Transnistria." This statement is other an important point of this meeting. It is not difficult to assume that this issue was discussed by Dodon and Krasnoselsky during their "traditional tete-a-tete conversation." On the eve of the elections, which are scheduled for November this year, Dodon has a difficult political and socio-economic situation. Despite the recent failure to vote no confidence in a government loyal to him, the threat that the government will resign remains. There were protests by veterans of the Transnistrian conflict, who came to support ordinary citizens and some politicians and during which slogans "Get Dodon" were heard. In the country's economy, against the background of the coronavirus epidemic and the lack of external financial assistance, negative trends continue. All of the above, along with constant criticism from both democratic forces and fugitive oligarchs Plahotniuc and Shore, who want revenge for removing them from power, make it difficult for the Moldovan president to be re-elected for a second term.

In such a situation, the lifeline for Dodon may be the voices of Moldovan citizens living on the other side of the Dniester. Especially given the fact (as noted in the same DA) that "no one is familiar with the real list of voters."

Dodon knows quite well how Transnistrian votes can affect the election results. During the 2019 parliamentary elections, the candidates nominated by the Socialists and supported by President Dodon were defeated in the constituencies created for the people of Transnistria.

Realizing the "delicate" situation in which Dodon now finds himself, Krasnoselsky had a great opportunity to knock out concessions from him for the separatist region. In exchange for Transnistrian votes, he, for example, may demand from Chisinau banking services for Transnistrian enterprises. Participation in the meeting of representatives of the economic and financial sectors, only confirms this assumption. Otherwise, quarantine posts, which, like the banking system, were the main issues during the meeting between Dodon and Krasnoselsky, may not only be not removed, but also increased along with the strengthening of the regime of their passage.

I. Kabanenko: an asymmetric answer is needed at sea