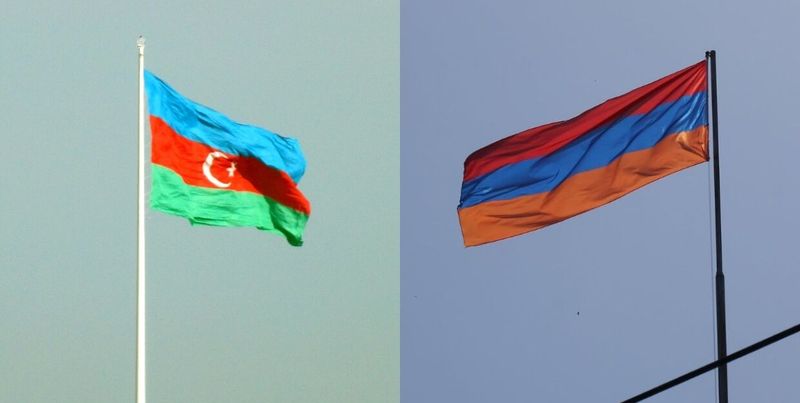 Part 1. Azerbaijan and Armenia were again (and still are?) On the verge of a large-scale war. And they recently caught fire not on the line of confrontation in the Karabakh region, but on a section of the state border, and in a very revealing place.

The main questions sound banal - who benefits from it and why right now? CIACR-South Caucasus provides an expert platform to colleagues from Azerbaijan and Armenia. Below is the material of the experts of the Baku Center. Topchibasheva (Top-Center.org).

The opinion of the Yerevan Center for Political and Economic Strategic Studies can be found at link.

On July 12, 2020, the Ministry of Defense of Azerbaijan reported a military incident in the northwest of the country, namely in the Tovuz region, near the border with Armenia. Although border skirmishes were not uncommon in the province, and many believed it was another one-off incident, the situation spiraled out of control and quickly escalated into an almost full-fledged war.

Both countries have been at war for more than three decades due to the occupation of Nagorno-Karabakh and the adjacent territories by Armenia, which are de jure part of Azerbaijan. The conflict, which arose as a result of inter-ethnic clashes in the Soviet Union in 1988, soon turned into one of the bloodiest wars of the 1990s, claiming 20.000 lives on both sides. By 1994, when the active phase of the war was coming to an end, Armenian forces had already occupied 20% of Azerbaijan's territory, including the former autonomous region of Nagorno-Karabakh and seven adjacent administrative districts, and expelled more than 700.000 Azerbaijanis from their homes. The ceasefire to end the war, however, has always been volatile, as the situation does not fit the term "frozen conflict", a term used to refer to some ethnic conflicts in the post-Soviet space. The last major outbreak in this area occurred in April 2016, when the Azerbaijani army managed to liberate several square kilometers from the occupying army during the so-called "Four-Day War".

This time, however, the main theater of operations is the direct border between the two countries, located a couple of hundred kilometers from Nagorno-Karabakh. The clashes began on July 12 and continued with small breaks for the next two days. Although not all details of the fighting are known, reports say heavy artillery shelling and drone strikes. Several people from Azerbaijan were killed, including a civilian whose village came under Armenian fire. These deaths have caused great frustration and anger in Azerbaijan, which makes deterring violence a much more difficult task now. However, the Ministry of Defense of Azerbaijan has already clearly refused to attack the civilian population of Armenia, promising to fire exclusively at enemy military facilities.

While the Armenian authorities have tried to place the responsibility for the outbreak on the Azerbaijani side, accusing it of provocation, Baku has no motive to start any military action in this particular region, and this can be explained by the following statements:

Secondly, it is quite obvious that the escalation of hostilities in this way, quite far from the occupied territories of Azerbaijan along the indisputable border, the vicinity of which is densely populated on both sides, is not in the interests of Azerbaijan. An important distinction should be made here between the concepts of "border" with Armenia and "line of contact" with Armenian forces in Nagorno Karabakh and the seven adjacent territories. The official position of Azerbaijan, in turn, entails escalation along the borders with Armenia, as Baku has no territorial claims to the internationally recognized territories of the opposite side. Accordingly, the initiation of the provocation in Tovuz, located along the border and far from the line of contact, contradicts the Azerbaijani justification for resolving the current conflict.

Third, the above statement contradicts Azerbaijan's plans to gradually demilitarize its direct borders with Armenia. Since December 2018, as part of measures to reduce violence at the border, the Azerbaijani side is transferring military posts and military units on the borders with Armenia, namely in the Gaza and Agstafa regions, from the Ministry of Defense to the State Border Service. Tovuz, where the clashes took place, was to be next on this list. This concrete step was again aimed at sending a clear signal to Baku that Baku seeks to demarcate the borders with Armenia and the line of contact in Nagorno Karabakh. Thus, the organization of a planned attack by Tovuz not only makes no sense in terms of what signal Baku is trying to convey to the international community, but also in terms of its long-standing plans for military restructuring along the northwestern borders.

Finally, a direct attack on Armenia, a member of the Collective Security Treaty Organization (CSTO) outside the occupation zone, clearly does not fit into Azerbaijan's long-term strategy. If Baku decides to start a war, a more suitable zone would be Nagorno-Karabakh and the surrounding areas, which are a recognized part of Azerbaijan and do not fall under the CSTO's jurisdiction, making direct military intervention by any third party unlikely. However, in the event of an open confrontation between Baku and Yerevan in the undisputed territories, CSTO intervention, which includes Armenia, would rather be inevitable. Therefore, despite the fact that it is definitely forced to give a tough response to the loss of several high-ranking officers, Azerbaijan is at the same time restrained in its reaction, as the spread of hostilities on the territory of Armenia could lead to unpredictable consequences. In this regard, some observers do not even shy away from reminiscing about the catastrophic consequences of the 2008 Russian-Georgian war.

However, in trying to determine the causes of the outbreak, we also cannot completely rule out the CSTO factor: especially given that the Armenian side renewed its national security strategy on July 10 this year, a few days before the shooting, where much emphasis was placed on an alliance with Russia and membership in the CSTO. Accordingly, it can be assumed that by launching hostilities along the state border, Armenian leader Nikol Pashinyan tried to check the pulse and see if the CSTO could be drawn into the conflict: a positive response could strengthen the Armenian-Russian military alliance (which has deteriorated due to Pashinyan's recent measures). , for example, the arrest of the Armenian CSTO chairman), while a negative reaction (or no reaction at all) could provoke anti-Russian sentiment in Armenia.

Immediately after the clashes, the Armenian authorities did call on the organization to take part. However, the CSTO response was not urgent. She first convened and then abruptly canceled an emergency meeting of the organization's security council, postponing it until an indefinite date. Moreover, two important members of the military bloc - Belarus and Kazakhstan - usually support Azerbaijan's position on the Karabakh issue and can play an important role in delaying the CSTO session.

In fact, the recent escalation on the part of Armenia fits perfectly into the model of behavior demonstrated by Pashinyan in the last few months. In May this year, he took part in the swearing-in ceremony of Nagorno-Karabakh's president in Shusha, a city of great emotional significance to the Azerbaijani community, a move Baku saw as highly provocative and unprecedented, even by Sargsyan's previous government. In June, Armenia announced the construction of a new highway connecting Armenia with Nagorno-Karabakh. This act was so blatantly provocative that even the EU had to comment on it, condemning Armenia's decision and noting that "the decision to build this highway was made without the consent of the competent authorities of Azerbaijan - in violation of international law" and "does not help create conditions conducive to trust, peace and coordination. " Although the cause of recent provocations is still unclear, it is possible that Pashinyan is trying to take control of his critics from far-right opposition groups, who accuse him of being too lenient with Azerbaijan by spreading conspiracy theories that he is preparing to sell Nagorno-Karabakh.

Military action between Armenia and Azerbaijan could also have been provoked by elements of the old anti-Pashinyan elite, which is quite strong in law enforcement and the armed forces. Undermining the post-revolutionary prime minister, these elements may have sought to portray him as a weak leader who failed to confront Azerbaijan on the battlefield. One of the key messages in Pashinyan's sharp criticism of his domestic rivals, especially former President Kocharian, was that his inability to pursue a proper military policy would undermine the potential of Armenia's armed forces and directly threaten the Karabakh regime. There are already rumors in Armenia about hundreds of dead, wounded and captured, which have not been commented on by the Ministry of Defense - so far it has already acknowledged the death of four militants, which is an unreliable figure given the scale of the fire.

For any inquiries, We're here to answer you.

There is an exciting military escalation between Azerbaijan and Armenia, and it is still impossible to say how far it can go. As it follows a qualitatively new scenario, the parties find themselves in a state of high uncertainty, while traditional foreign defenders of the status quo seem to lack an understanding of how to bring the parties to peace in such unusual circumstances. Ultimately, however, this outbreak is a natural result of many years of neglect and ineffective management of the Nagorno-Karabakh conflict. The lessons of 2016 have not been well studied by the international community, which has continued to rely on outdated tools and methods in a changing environment.

Despite the growing recognition of the fact of illegal occupation of Azerbaijani territories, the "Velvet Revolution" of 2018 gave rise to unfounded and naive expectations that the supposedly new liberal government of Armenia will be enough to revive the peace process. In fact, the lack of international pressure on Armenia only meant that Pashinyan's government gradually fell into populism on the Nagorno-Karabakh issue and took a number of provocative steps that further inflamed the situation. No truce can be lasting unless it is backed by tangible measures to finally restore the rights of Azerbaijani refugees and maintain the territorial ambitions of the Yerevan elite.

Ukrainian defense of the times of the coronavirus