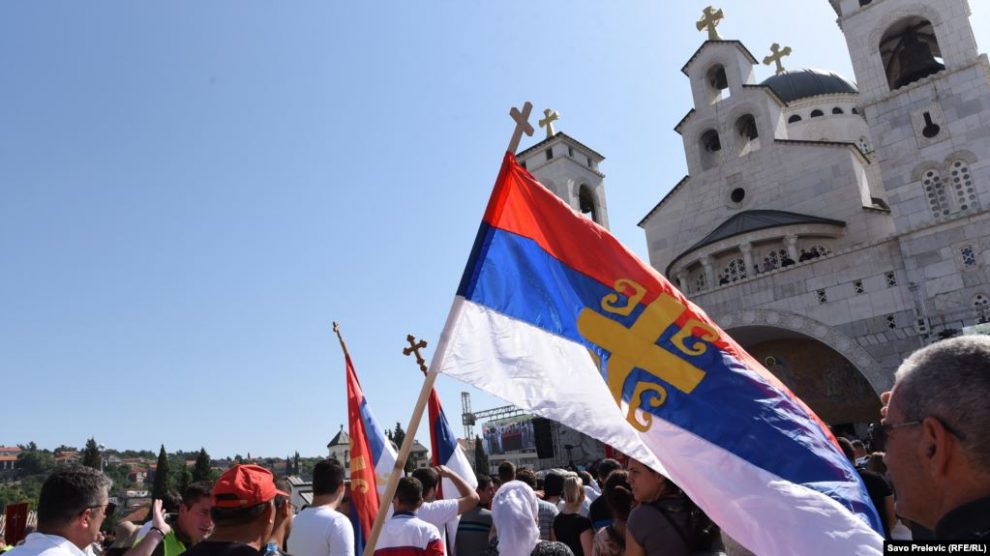 After the failure of the anti-government coup in 2016 and Montenegro's subsequent accession to NATO, Russia seemed to have come to terms with the loss of this Balkan country. However, Moscow has openly and covertly supported the ongoing anti-government protests in Montenegro, caused by the adoption of the so-called church law, say that the Kremlin just paused and waited for the right opportunity to take revenge.

Protests organized in defense of the Serbian Orthodox Church (SPC) against the Montenegrin parliament's law on religious freedom have been ongoing for more than four months. All this time, thousands of believers took part in the processions and prayers, who opposed the possible transfer of churches and monasteries of the Serbian Orthodox Church to state ownership, as required by the new law. The COVID-19 epidemic suspended the protests for a while, but resumed on May 12. The reason was the organization of the SPC church procession in the city of Niksic in order to honor the day of the most revered saint in Montenegro - St. Vasily Ostrozky. Under the conditions of quarantine, such actions of the SPC were nothing but a provocation and, as the following events showed, it succeeded. Bishop Ioannicius of Niksic and several other SOC monks were arrested for violating the ban on mass gatherings, which in turn led to a wave of mass protests in Montenegrin cities. The actions of Montenegrin law enforcement agencies, in addition, have traditionally provoked an extremely negative reaction from the leadership of the SPC, official Belgrade and the Serbian media.

The resonance created in Montenegro by the organized SPC protests is due to the fact that the Serbian Church today remains one of the most influential organizations in the country. Recent opinion polls in the country have shown that about 2/3 of the Montenegrin population trusts the SPC. On the other hand, being registered in Serbia, where its patriarch resides, the SPC in Montenegro is effectively outlawed. Since Montenegro gained independence in 2006, it has effectively resisted all previous attempts to change its legal status.

In addition to such a unique position, the SPC in Montenegro has another "feature", namely: it has long been not just a religious, but also a political, economic and social institution. She often interferes in matters that are far from religious issues. The SPC participates in anti-NATO, anti-Western rallies, protests and demonstrations and constantly has a public position on any political or social issues, which often coincides with that promoted by the ROC and Russian propaganda in Montenegro and the Balkans in general.

Using its "privileged" (illegal) position, the SPC is also able to support various anti-state radical movements. As, for example, during the anti-government coup in 2016, when the SPC, although not seen in direct participation in it, but provided on the eve of the coup meeting of its leadership in the most famous Ostroh monastery.

Therefore, actively opposing the Montenegrin authorities in the implementation of the law on freedom of religion, the SPC seeks not only to maintain its religious monopoly in the country, but also the above impact on all spheres of its life. In addition, the fate of the Orthodox Ohrid Archbishopric, which is an autonomous church within the SPC operating in Northern Macedonia, will largely depend on maintaining its position in Montenegro.

For its part, Russia also has an undisguised interest in the activities of the SPC in Montenegro. The protests, organized by the Serbian Church, which is popular among the Montenegrin population and has close ties to the ROC and the Kremlin, open up a wide range of opportunities for the latter to restore its position in Montenegro and the Balkans in general.

Official Moscow has not yet joined the active criticism of the Montenegrin government, limiting itself to periodic comments on the subject. Although they are more than eloquent. According to Russian Foreign Ministry Speaker Maria Zakharova, in which she noted, in particular, that "another surge in tensions in Montenegro is a matter of grave concern in Russia, and attempts at outside influence to divide Orthodox believers in the Balkans could lead to major upheavals in the region." ». Zakharova's words about the "great upheavals" should be seen as a signal of the Kremlin's readiness to further support the SPC in destabilizing the country.

At the same time, the ROC and Russian propaganda, which have been at the forefront of the anti-Montenegrin attack since the adoption of the so-called church law, do not stop the campaign to discredit both the law itself and President Milo Djukanovic.

In its "Patriarchal and Synodal Message in connection with the situation in Montenegro", the ROC stated that "By arbitrarily and illegally interfering in the field of canon law, the Montenegrin authorities deny the obvious and easily evidential succession of the canonical Church, insisting on its re-registration, which takes the Church beyond the legal field and puts it under attack by aggressive nationalism." In addition, the ROC points out that the actions of the President of Montenegro are equated to the actions of the fifth President of Ukraine Petro Poroshenko, who allegedly "played a church card" to score points in the election campaign.

As for the Kremlin's propaganda, from the very beginning the situation around the SPC in Montenegro has been one of the most important for it. To comment on this situation, Russian propaganda traditionally uses various local pro-Russian forces. For example, Igor Damyanovich, who took an active part in the campaign against Milo Djukanovic before the 2016 elections. Russian propaganda presents him either as a political scientist, as a coordinator of an anti-NATO project, or as an analyst or independent journalist. Another example is Boro Djukic, a former honorary consul of Russia in Montenegro, who is linked to the pro-Russian conservative party True Montenegro, which has strong information support in Russia. By the way, the leader of this party Marko Milacic, like Damjanovic himself, has been one of the main commentators on Montenegro in the Russian propaganda media in recent years.

In addition to the ROC and propaganda, the Kremlin is actively using its people directly in the protests. For example, in a rally on May 12, protesters blocked the road between the towns of Berane and Andrievica for the whole day, stopping all traffic on it. As it turned out later, the organizers of the roadblock were activists of the pro-Russian Democratic Front and one of its leaders, Andriy Mandych, who is one of those accused of involvement in the 2016 anti-government coup. Another example is the organization of a quarantine action by former Montenegrin Interior Minister Goran Danylovic, combined with a protest against the transfer of churches to state ownership. Danilovic, who is the leader of the pro-Russian United Montenegro, once strongly opposed the country's accession to NATO and is one of the leaders of Montenegro's friendship movement with Russia.

Russia is also involving its special services in other regions in actions in support of the SPC in Montenegro. Thus, according to Kosovo journalists, three Russian citizens, one of whom is an employee of the GRU General Staff, were present during the Serb rally in the Kosovo town of Gracanica.

Supporting and stimulating the "church crisis" in Montenegro, the Kremlin pursues the following main goals:

To achieve the above goals, the Kremlin will continue to support the SOC in Montenegro and its protests, as well as a local agency of pro-Russian political forces and various activists, and will use special services to perform the most "delicate" tasks. The stakes for the Kremlin in the "Montenegrin game" are high, and therefore, we can be sure that it, traditionally, is not worth the price. This, in turn, indicates that the "church crisis" in Montenegro, especially with the approach of parliamentary elections, in which Moscow will try to change the political status quo in the country, will only worsen.

Adil Kaukenov: COVID-19 pandemic as a trigger for the US-China confrontation