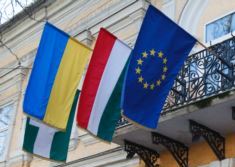 The Foreign Ministers of Ukraine and Hungary, Dmytro Kuleba and Peter Siyyarto, will meet in Budapest on May 29, including to prepare for a meeting between President Volodymyr Zelensky and Hungarian Prime Minister Viktor Orban.

Considering that the ministers plan to agree on the outlines of the leaders' agreements, Ukrainian experts in charge of Ukrainian-Hungarian relations have prepared a common position on Ukraine's "red lines" in these talks and on issues on which a compromise seems achievable.

Expectations from the Zelensky-Orban meeting

We hope that the leaders of Ukraine and Hungary will be able to restore mutual trust and start moving towards the restoration of constructive relations. We do not expect that one meeting will solve all the problems: it seems unrealistic in the current atmosphere of mistrust.

Because of this, a step-by-step approach seems logical. It is crucial to agree on a compromise on the language of education, which will lift Hungary's veto on the NATO-Ukraine political dialogue and strengthen cooperation with NATO and the EU. It is possible that the agreements will also include other elements that will give Budapest and Kyiv more confidence in each other's constructive intentions.
It is important for Ukraine that these agreements are not unilateral concessions, nor that they cross the "red lines" that could cause significant public outrage.

Limits of compromise on the language of education

Hungary's fundamental desire for educational institutions is to leave Hungarian schools as centers of the Hungarian language and culture, as well as to protect children from Hungarian-speaking families from discrimination. Ukraine's fundamental aspiration: to ensure that graduates
schools in settlements with a predominantly Hungarian population, knew Ukrainian at a level sufficient for social integration, further study and career in other regions of Ukraine.

These two aspirations can be combined.
Kyiv has repeatedly stated the invariability of the current version of Article 7 of the Law "On Education", disclosed in the Law "On General Secondary Education". The rejection of this principle will be perceived by a large part of society as a surrender of Ukraine's interests, and will also prove the effectiveness of the language of ultimatums, which will give an ambiguous signal to other neighbors of Ukraine, who have so far taken a moderate constructive position. However, Article 7 provides considerable flexibility in implementation (as emphasized in the conclusions of the Venice Commission).
Therefore, we recommend not to change the language provisions of educational legislation, reaching a compromise due to its flexible implementation. A way out of the crisis is possible if Ukraine and Hungary agree to jointly develop bilingual (bilingual) education for Hungarians, and the Ministry of Education and Science will agree that bilingual (state and EU languages) teaching of some subjects will be counted as teaching in Ukrainian.
Bilingual education is quite difficult to implement, but it is possible with the educational cooperation of Hungarian and Ukrainian universities.
To make this decision long-term, the parties must agree to train teachers for bilingual education on the basis of several universities in Ukraine and Hungary. The Ministry of Education and Science should develop qualification requirements for bilingual education (regarding the share of the Ukrainian language, etc.), which will take effect after a certain period. At the same time, it should improve the quality and volume of teaching subjects in Ukrainian for the Hungarian minority. The incentive for students should be to take the EIT exclusively in Ukrainian after the transition period (as provided by current legislation).

Other possible issues of compromise with the outlined red lines:
- Remove ambiguity in the law on citizenship, removing from the grounds for loss of citizenship of Ukraine "voluntary acquisition by a citizen of Ukraine of citizenship of another state other than the aggressor state" (this does not require a change in the constitutional principle of "single citizenship")
- Adopt a law on national minorities, a draft of which will be prepared in dialogue with representatives of national minorities, taking into account the issues of their representation in local governments.
- Initiate consultations on the implementation of new educational legislation on the establishment of private schools with Hungarian as the language of instruction in Transcarpathia.
- During the completion of the administrative-territorial reform in Transcarpathia, preserve the district with the center in Berehove, taking into account the compact residence of the Hungarian minority in Berehove and Vynohradiv districts. However, the creation of an exclusively Hungarian-speaking district is unacceptable: the creation of mono-ethnic groups poses a risk of self-isolation and will reduce their influence on the formation of a national agenda.

Expected results of negotiations for Ukraine:
- The Hungarian government should publicly abandon the policy of blocking Ukraine's political dialogue with NATO, as well as blocking critical decisions in Ukraine's relations with NATO and the EU.
- The Hungarian government should stop the rhetoric about the need to return the language norms of educational legislation to the version of 2017 as the only way out of the crisis. Ukrainian expert
the community is convinced that the adjustment of language legislation is ripe, that it cannot be repealed, and that a compromise must be found through its implementation.

Given that President Volodymyr Zelensky has already announced the preparation of a Ukrainian-Hungarian memorandum, we consider it necessary to provide additional proposals for the development of constructive relations and mutual trust:

Intensify the activities of parliamentary groups of Ukrainian-Hungarian friendship to implement joint activities to build trust between Ukraine and Hungary;

Maintain the institution of government special representatives and establish their permanent cooperation to coordinate projects in the Transcarpathian region.

Coordination of counteraction to possible incidents and provocations in border areas.

It is proposed to create an institute of liaison officers (Liaison Officers) for effective cooperation between law enforcement and counterintelligence agencies of Ukraine and Hungary.

Given the success of the first Ukrainian-Hungarian expert forum with the participation of governmental and non-governmental think tanks and experts, to create a permanent forum for making proposals on urgent issues and areas of development.
bilateral relations;

Consult on possible areas of military-technical cooperation (including the supply of light armored vehicles, EW systems, drones, artillery, other modern systems and weapons for the rearmament of the Hungarian army and other law enforcement agencies).

Intensify joint military exercises, as well as the activities of the Tisa International Battalion to form a positive agenda for Ukrainian-Hungarian relations (both at the regional and state levels).

Intensify joint infrastructure projects in the Transcarpathian region and the Szabolcs-Szatmár-Berezka region of Hungary.

More on the topic in author's article by Serhiy Sydorenko

What does Putin's statement about "gifts from the Russian people" mean?