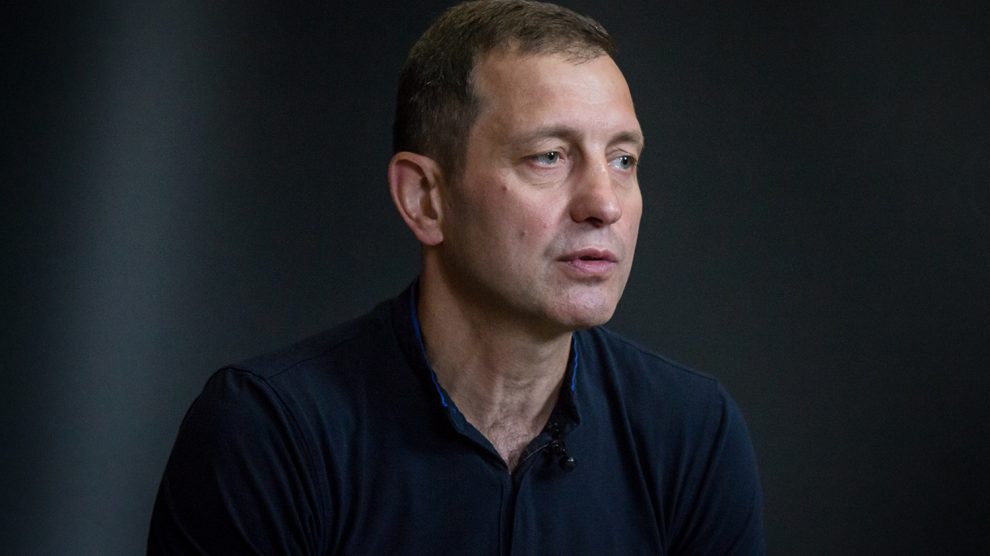 The participants in the Joint Forces (JFO) operation made public video of the actions of the sniper unit of the FSB of the Russian Federation, shot by the Russian security forces themselves, during the fire defeat of the Ukrainian military in Donbass. The Kremlin does not intend to slow down in the war against Ukraine. In this regard, many Ukrainian citizens are asking themselves the question: is peace possible at all if you are next to the Russian Federation? And if sooner or later hostilities against our country cease, is it possible that Russia will become a strategic partner of Ukraine or, despite the change of presidents, the Kremlin will always put pressure on us? About this and much more "FACTS" talked with Valentin Badrak, a military expert and director of the Center for Research on the Army of Conversion and Disarmament.

"We will become equal partners with Russia in some 2600"

- To be equal partners, you need to achieve a certain parity in their capabilities. When can this happen? Probably in some 2600, - says Valentin Badrak. - Russia put pressure on Ukraine at all times as soon as the Russian Empire appeared. And this pressure only increased. At the end of the XNUMXth century, the Ukrainian language was banned altogether. They began to eradicate Ukrainian culture. The same policy was pursued during the Soviet era.

Why do I remember all this? No diplomacy will be globally successful unless it is based on the foundations of a powerful armed force that is a real institution of deterrence. The army must be such that it can prevent the beginning of aggression even at the stage of developing a military operation against us. The aggressor must know that in trying to start a war, his losses will be so great that it is better for him to abandon his plans.

- It turns out that the neighborhood with Russia is very expensive for us. But why is the Kremlin more loyal to some of its other neighbors? They do not go to the Baltics for obvious reasons - there is NATO. They are friends with Armenia. Putin has tried to influence Kazakhstan, but he has little to gain from it. Why Kazakhs manage to keep the brand when communicating with Russia, and we - not so much.

- The matter is not in Kazakhstan itself, but in what foreign policy course this country follows. They are members of the Customs Union and are loyal to Russia. Kazakhstan pursues a pro-Russian policy on the global world stage. Kazakhstan is maneuvering. He, on the one hand, plays along with Russia, and on the other, defends their national interests. This is quite acceptable for the Kremlin. Belarus balances in the same way.

Armenia is also close to Russia, as it is the bridgehead of the Russian Federation in the South Caucasus. With the help of Armenia, the Kremlin can influence both Azerbaijan and Turkey.

Ukraine, on the other hand, has concretely and sharply taken a step towards Euro-Atlantic integration, thus making, in fact, a civilized choice. We chose Western values ​​instead of empire.

In 2007-2008 there was a stage of the Cold War against Ukraine. The Cold War was aimed at preventing a situation where our country could receive a MAP (NATO Membership Action Plan. Ed.). Due to Russia's multifaceted impact, we have not received a MAP. The Kremlin calmed down for a while and began to put forward the idea of ​​reconciliation. But as soon as Ukraine began rapprochement with NATO and the European Union again, the pressure began. And even more powerful than before. Including through military aggression.

- Maybe something will change when a new president appears in Russia?

- Of course, sooner or later the master of the Kremlin will change. But it is hardly necessary to expect that a politician loyal to Ukraine will appear in Russia immediately. Most likely, there will be a transition period. Therefore, we simply need to learn how to build our army in such a way that it can support us at all times. If we manage to achieve this, we can talk about some kind of parity cooperation, which will be beneficial primarily to Ukraine. After all, in the past, all cooperation was based solely on the benefits of Russia.

"Last year in Ukraine counted 200 thousand evaders from the army"

- In recent years, the Ukrainian press has often written that our army is almost the strongest in Europe. And how are things really?

- Unfortunately, Ukraine does not yet have such a powerful army as we would like to see. Yes, we can quite successfully confront a low-intensity war, but no more.

When we talk about the army, we need to understand that there are people, there is equipment, and there is learning. So, in terms of "people" and "learning", Ukraine has really reached a high level in this hybrid war. If you remember, at the very beginning of the events in Donbass, one of the problems of society was the pacifism of the citizens of Ukraine. Much has changed in the mentality since then. Now the Ukrainians are ready to fight the enemy, who in many ways surpasses us and is a nuclear state.

As for the technological level, we are certainly still lagging behind the leading European armies. There are reasons for that. Until 2014, the army and armaments in Ukraine were not actually engaged. It is impossible to close all issues of armament or rearmament in such a short time. Although, all the same, it was possible to do much more and at once to be guided by high-tech systems.

One of the global threats today is that monthly losses on the eastern front average 10 fighters. These losses are critical because they can demoralize not so much the army as society. Because society is starting to look at the army with apprehension. At the same time, the army failed to maintain the authority that it had in 2014-2015. What does this lead to? To the fact that every year the number of evaders from the army grows. Today it is more than 200 thousand people. This is a very ugly litmus test.

- How does Vladimir Putin relate to Vladimir Zelensky? I drew attention to the fact that when the master of the Kremlin congratulated on Victory Day - he congratulated the people of Ukraine, but did not mention the Ukrainian president. Was it done on purpose? It is unlikely that Putin simply forgot to congratulate Zelensky.

- This is a whole information operation. In Russia, the people and the government are deliberately divided. "Forgetting" to mention the leadership of our country in his congratulations, Putin seems to emphasize the insolvency of the Ukrainian authorities.

"Yes and no." On the one hand, the Ukrainian president continues to voice plans for rapprochement with NATO and Europe, which Putin does not like at all. But Zelensky can partially suit Putin as a politician who wants peace and is willing to make concessions to the Kremlin in principle, if society allows it.

The big problem is that Zelensky pays almost no attention to the development of defense potential, entrusting it to others. And because of this, a situation emerges that is quite beneficial to the Kremlin.

- But in Ukraine new developments of military equipment constantly appear. Neptune rockets, for example, have even been praised by Americans.

- Yes, the missile potential is one of the elements of an asymmetric war. But a comprehensive approach is needed. The same missile capabilities could be developed at a much faster pace than planned in early 2020, when the country's former military leadership came up with the idea of ​​placing missile projects under state guarantees, which meant jeopardizing the implementation of these projects. Fortunately, the new Presidential Decree 5920 eliminated this situation.

But we have many other unresolved issues. Territorial defense is not developing at all. In the seventh year of the war, no law on terrorism was passed. The situation is unresolved and is developing chaotically.

Next. We have special forces, which, in principle, we should be proud of. Ukrainian special forces are traditionally strong. Do you know that every fourth warrior who fought in Afghanistan is from Ukraine? But our special forces never received the right to conduct special operations outside Ukraine at the legislative level.

- Where is it outside Ukraine? In Russia?

- Including in Russia. And on the territory of any state. We are not talking about the participation of special forces in open hostilities, but about sabotage.

More. The security service must first become a counterintelligence body, which will have to perform one task - to neutralize the Russian military threat, and not to perform police functions. But this issue is also unresolved.

- In Ukraine from the very beginning of war and till today demonstration of the highest scientific potential is observed, - continues Valentin Badrak. — We are currently developing and producing unmanned aerial vehicles and combat robots. It took only five years for these developments. While in other countries a similar process takes thirty years.

- Are you talking about Ukrainian developments or production on foreign patents?

- The fact of the matter is that these are Ukrainian developments. More than 30 companies took part in this process. Five or six Ukrainian companies are already serious players in the world market.

- Can we defeat the Russian army in an open military confrontation?

- Now the wars are developing according to a different scenario. Battles like the Battle of Stalingrad or the Battle of the Kursk Arc are not possible now. Other approaches are needed. I stand for the "mosquito" doctrine.

- The "mosquito" doctrine is the ideology of "thousands of bites". This is when many drones are used instead of one plane. Instead of one tank or armored personnel carrier - 20-30 ground combat robots. For comparison: BTR-4 is purchased by state order at a price of 9,3 million dollars (250 million hryvnias. - Author). And one strike combat robot with missile systems costs less than 3 million hryvnias. And for the price of one corvette you can buy 30 rocket boats. For example, if we lose a military corvette in three minutes of war, it is difficult to understand why we spent so much money? And the "mosquito" fleet, even if a third of it is lost, will still remain quite combat-ready.

- What prevents us from implementing the "mosquito" doctrine?

- Bureaucracy. It is necessary to change charters, it is necessary to accept the protocol of application. In addition, you need to train personnel how to use these combat robots. It takes some time and effort. But this must be done in order to save the lives of our soldiers. Political will is needed to make robotics and automation a priority.

Combat robots appeared in service in 2016. And what? Robotization in the army is not developing.

- Do Russians also use combat robots?

- Russia has tested ground combat robots in Syria. The Russian Federation uses a large number of drones against Ukraine.

Earlier, "FACTS" wrote that Ukraine demonstrated to the OSCE representatives the latest Russian drone that was shot down in Donbass.