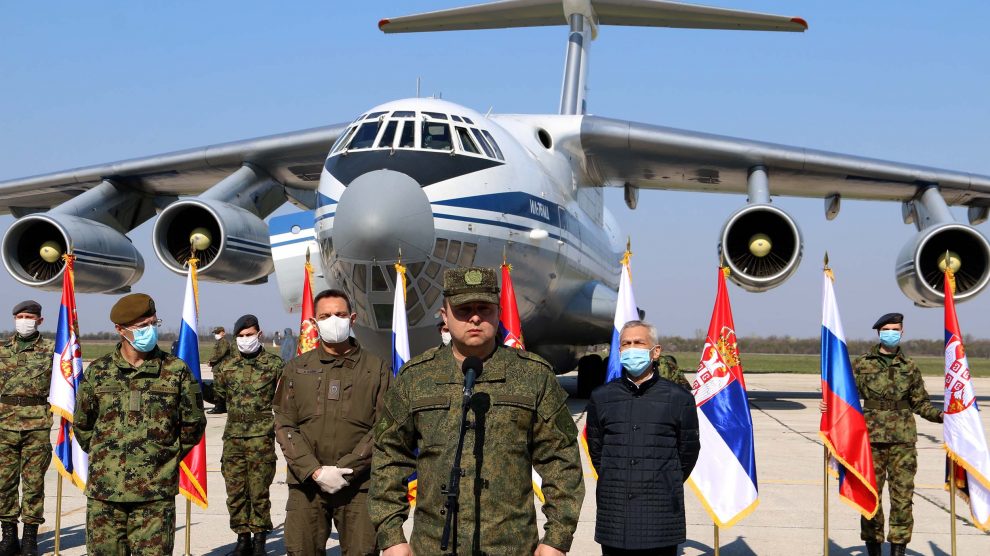 The Covid-2019 epidemic, or coronavirus, continues to spread in the Balkans. Cases of the disease have been reported in all countries and most of them are taking sufficiently rigorous measures to address it, including emergency situations, traffic restrictions, curfews, quarantines and increased controls. At the same time, an important "side effect" of the fight against the coronavirus is the efforts of local political elites to use it for their own political purposes, and of third parties - to strengthen their influence in the region. The situation in Serbia is indicative here.

Following the outbreak of a coronavirus epidemic in its territory, Serbia naturally expected external assistance from its closest neighbor, the EU. However, through domestic bureaucracy, European assistance was hampered, for which it received a sufficient chunk of criticism from official Belgrade. In his first public address on the topic of coronavirus, Serbian President Aleksandar Vucic accused the European Union of unwillingness to help Serbia. According to him, the EU has imposed a ban on the export of medical equipment and medicines to third countries, which is, in fact, untrue, while denying that Serbia has taken such measures itself. He also accused the EU and its Member States of hypocrisy because they, on the one hand, did not want to help Serbia, and on the other, urged it to abide by their standards of co-operation with China. At the same time, he said that "the only country capable of helping Serbia is China, and that he expects his brother Xi Jinping to come to the rescue."

There are several reasons for this behavior of the Serbian president. First, cooperation with China has been increasingly questioned in Serbia over the last two months, especially after the air pollution situation earlier this year. Against this background, seeking help from China should be seen as an attempt by Alexander Vucic to improve Serbia's image of the Middle Kingdom. Secondly, until recently, the Serbian authorities had been quite calm about the Crown virus issue. As a result, with the outbreak of the epidemic, there was a real threat that without external assistance, the situation in the country could become critical. Realizing this, the Serbian authorities began to be active, shifting the focus of responsibility for the situation to the EU, which "does not want to assist it."

This situation and calls for help were not ignored by the "Chinese brother", who could not but take the opportunity to improve his image and position in Serbia, which has long been used by him as one of the bridges to Europe. The Serbian president's words were heard in Beijing and, after initially flowing into social media messages with words of support from Chinese citizens, China sent a party to Serbia a few days later. However, for the sake of fairness, it should be noted that it had a number of "minor" features: assistance was delivered to Belgrade by Serbian aircraft and at Serbian expense.

As far as the EU is concerned, it has taken a serious criticism of President Wucic and Chinese aid to Belgrade. Brussels understands that they need to step up their humanitarian assistance to Serbia compared to third parties and that the EU needs to be more proactive in order to be considered a leading player in Serbia and the region as a whole.

That is why the EU, though not immediately, opened the first tranches of aid to the Balkan countries: initially smaller amounts for priority cases (in particular, EUR 7 million for Serbia, EUR 4 million for Albania and EUR 3 million for Northern Macedonia), and later larger ones.

After Belgrade received first European aid, the rhetoric of the Serbian president and other officials has dramatically changed his vector: from extremely negative to opposite. Now the EU, as well as a number of other countries that have provided significant financial assistance to Serbia, including Norway, are portrayed as reliable partners, cooperation with which is crucial for the country.

In general, the Serbian authorities' use of criticism on one side and calls for help on the other allowed it to receive the necessary assistance from both. Over the last few days, Serbia has received equipment, tests, medicines and significant financial assistance from China, the EU and individual countries.

However, such actions by the Serbian leadership have attracted enough criticism. Former Swedish Prime Minister and Ex-Foreign Minister Carl Bildt has criticized President Uchich for widely covering pro-government media's arrival of China-assisted aircraft and lack of attention to EU aircraft. For their part, a number of European media outlets and think tanks have stated that, today, Serbian diplomacy has "shown its true face" and that China has "won" in the "confrontation" of third parties in assisting Serbia. With regard to the latter, the same opinion is shared by local experts, who added that in the future, in China, the growth of Chinese influence should be expected.

Moscow does not rush to the rescue

While discussing the European-Chinese "confrontation" in Serbia for primacy in helping Serbia, local media began to raise quite natural questions: why wasn't Russia friendly in Serbia's list of assisted countries? Why, in such a difficult situation, has it simply disappeared from the radar of the local public and politicians who constantly mention cultural unions and fraternal relations with a friend from the East? What happened that in such a difficult situation, no one even pointed a finger at the "savior Putin" who is extremely popular with the local population?

In fact, the answer to these questions is quite simple: the Kremlin is simply not interested in helping Belgrade. At least until in Serbia the public begins to ask questions similar to the above and until the Serbian authorities turn to the "brotherly people" for help. Providing sincere and unhelpful help, no matter who it is intended to be - to the fraternal people or to someone else - just doesn't fit in and has never been part of the Kremlin's ideology. By any manifestation of "charity", especially if its initiative comes from the Kremlin itself, there is a clear foreign policy calculation and a desire to get the maximum benefit. This was also the case with Italy, assisting the Kremlin, counting on its vote against the continuation of EU sanctions and the further destruction of European unity.

In the case of Serbia, Russia will not receive the benefits of similar weight, because it already has everything it needs. Serbian authorities, the vast majority of local media, and Russian propaganda create an ideal image for Serbian society of Russia and its president. So why should Russia use its extra resources where there will be no return? Moreover, it is possible that Russian resources are limited.

Therefore, at first Russia was not particularly concerned about what was happening in Serbia. When Chinese aid planes arrived in Belgrade, the EU began to recalculate funds, Norway aided and assistance was announced from the United Arab Emirates, the Kremlin could no longer remain silent and… wished Belgrade a swift and successful fight against the coronavirus, promised that Russia "will always help Serbia". And only after a series of publications in the local media, which raised questions about the lack of assistance from Russia, and she herself was accused of lack of solidarity, in the Kremlin realized that further ignoring of Serbia could threaten the deterioration of its impeccable image in this country and still decided to send there .

Thus, on April 3-4, eleven planes with medical equipment, equipment and means of defense, as well as Russian troops led by the commander of the RChB of the Western Military District, arrived from Moscow.

In order to counteract the above criticism of Russia, the arrival of Russian aid to Belgrade has received maximum attention from the Serbian top leadership and pro-government media. The first of the 11 aircraft was met in person by Serbian Prime Minister Ana Brnabic, Defense Minister Alexander Vulin, Chief of General Staff Milan Mosilovic and Russian Ambassador to Serbia Alexander Botsan-Kharchenko.

Defense Minister Vulin, who is one of Russia's most pro-Russian Serb politicians, did not spare his epithets for expressing his gratitude to Russia and once again took the opportunity to show his exceptional commitment to Moscow.

"This (Russian help - ed.) Shows that we are not alone, that the Russian Federation and the Russian people are always with us, as and when it would be difficult and that Serbia is no longer and will never be lonely ... Today, in these difficult times, when the whole world was waiting for help from the Russian Federation, this country decided to help Serbia ... All that it could use for itself, on its territory, it decided to pass on to the citizens of Serbia, "the Minister of Defense said, adding that Serbia had never does not forget the good.

The Russian ambassador Botsan-Kharchenko spoke about the brotherhood of Russia and Serbia and their help to each other in difficult times. “This act fully fits into the nature of our relationship and reaffirms the friendship, firm brotherly help and readiness of our countries to be together for the best possible cooperation, not only in peace but also in difficult times. Cooperation, brotherhood and mutual support in the most difficult situation confirm a true friendship, ”he said.

In other words, everything was done to make the Kremlin's late, forced and unnecessary assistance look like an act of supreme mercy for the brotherly Serbian people, who is in no way inferior to the assistance already provided by the EU, China and other countries.

Overall, the situation surrounding Serbia's assistance in combating the coronavirus epidemic was indicative in two respects. First, it showed that the epidemic and the fight against it could be actively used by both local elites and individuals in international relations as an effective political and advocacy tool.

Secondly, it once again demonstrated the true contemporary foreign policy priorities of Russia and, in particular, the place, more precisely, its absence of "fraternal" Serbia in them.

Chairman of the Golos faction S.Rachmanin: "I am for the use of special operations forces outside Ukraine"

The impact of the Covid-19 pandemic on Kazakh-Chinese relations