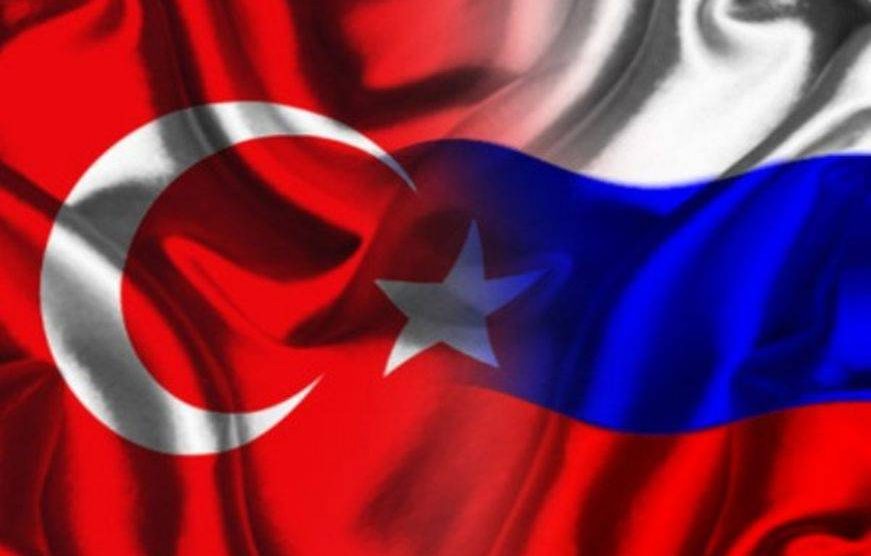 The fact that the mutation of Turkey's socio-political fabric crosses the point of no return is understood long before the attack of a Russian plane in 2015 in the Syrian sky. And now it is possible to state ex post fact that it was the essence of the deep processes in the country, which is visible to the naked eye from the Yerevan balconies and echmiadzin churches.

In Turkey, "historical images" in the form of various neo-imperial doctrines are being revived, as references to a "national pledge", to the "Turkic world", which go far beyond the originally proclaimed framework of cultural cooperation, and find a place in the speeches of its senior leaders, which simply could not be 20 years ago. And all this is richly flavored with anti-Western rhetoric in a country that was recently considered a key bastion of NATO's southern flank. Russia, equally outraged by revanchist ideas in the form of "Russian world", "Eurasianism", etc., cannot but ignore it. Putin's Russia also pursues its aspirations in line with the "traditional" philosophy that characterizes the era of Nicholas the First, when Russia became a "gendarme of Europe". Now an important part of the Middle East - Syria, where its interests are mixed with the interests of Erdogan Turkey, has been added to this.

The crisis in Russian-Turkish relations, which was intensely inflated after the downed Russian plane and the demonstrative killing of the Russian ambassador to Ankara, immediately plagued the parties and prompted urgent emergency measures aimed at resolving it. The parties, with all the belligerent rhetoric, had an understanding of how much they needed each other, taking into account emerging external factors, and a crisis in relations is the best gift of all possible for those who can stop them. And very soon, life has shown that a very broad general interest can easily outweigh the acute disagreements over incidents, and difficult-to-solve issues can be circumvented and left for later.

This crisis period also predetermined their modus vivendi for the next period in such sensitive regions as the post-Soviet space and the Middle East in the context of everyone's relations with the West - the US and NATO countries.

This modus vivendi of historically deeply aware and understanding partners implies a mutual understanding of where the "red lines" of each one cannot be crossed. There is an understanding that the relationship of both with the West tends not to deteriorate, but certainly not to improvement, and the challenges that arise in this connection may be common and in the interests of the parties. Here, both the enhancement of the "partner" and mutual assistance in the issue of forced multifaceted "import substitution", as well as the understanding that after the annexation of Crimea by Russia, the "Montreux logic", which has justified itself in the Black Sea for decades, can extend to "land" in relation to post-Soviet relations. countries.

Ankara also makes it clear that it is "not enthusiastic" about strengthening ties between the post-Soviet countries and the West, at least by the fact that Turkey has actually put itself "out of the game" in confronting Russia with the West, demonstrating that it does not create problems for Moscow. But by imposing on its diplomacy the burden of "explaining" to Western allies why it cannot be otherwise. Not only did Turkey not participate in Western sanctions against Russia aimed at deterring it, but it also took places to "replace" the gaps that had emerged.

The Turkey-West-Russia triangle is characterized primarily by a crisis of confidence, regardless of the status of relations with the West (in one case, a formal union, in the other, a doctrinal confrontation). And to say that there is complete trust in the relations between Moscow and Ankara - is also not necessary. The dynamics of the relationship is determined by the rigid pragmatism caused by the "cards in the hands" that have to be "played". This is evidenced by developments following the US refusal to supply the Patriot Ankara SAM. RT Erdogan "found" an alternative in Moscow by concluding an agreement on the S-400 SAM. It caused a serious crisis in relations with Washington and the exclusion of Turkey from the program of re-equipment of the fifth-generation fighter jets - the F-35. The Turkish president has not stopped it, and he declares the possibility of an alternative in Moscow and Russian-made aircraft, and in the case of US sanctions - threatens to close the strategically important air base Inzhirlik.

Such a "tune" performed by RT Erdogan "Turkish march" on Russian (enslaving) score can be as tempting as possible for Moscow. However, past zigzags in relationships and RT Erdogan's behavioral stereotypes make the Kremlin think of more reliable guarantees that the process will be irreversible. After all, a huge political and monetary resource has already been spent on it (and it also covers the Turkish Stream pipeline project with the transformation of Turkey into a strategic gas transportation hub, and the Akkuyu nuclear project, etc.). So far, the only guarantee, even temporary, is the creation of such a situation in the future when Ankara will burn down all bridges with the West. But this is highly unlikely. However, even in this case, the question will remain open - what about Turkey after RT Erdogan? After all, not “one tomato” is at stake…

"Spiritual intimacy" in the "love mode"

Internal political processes in Turkey, following a failed coup attempt, have crystallized the system of the de facto, unlimited power of RT Erdogan. Under the sauce of combating terrorism, a real hunt for dissent has unfolded in the country, and the country has become one of the world record holders in the number of arrested journalists, human rights defenders, lawyers, etc. In Moscow, this naturally caused a feeling of "spiritual closeness", especially against the backdrop of about the increasing repression and suppression of freedoms in Russia.

The "spiritlessness of the West" has become a favorite target of critics from Ankara and Moscow in response to criticism for repression and authoritarianism. However, the kind of "conservativeness" of political thinking in both capitals implies that the rapprochement regime eliminates "unusual" steps that can bring "geopolitical discomfort" to each other in a highly volatile geopolitical environment, and the historically established "loveliness" regime, which is based on ignorance or ignorance. to each other's motives, in fact no one is going to cancel.

At the same time, there is an understanding that this is not a symmetrical partnership: if for Ankara Russia is a very convenient irritant for its trade with the West, then for Russia, Ankara is an "icebreaker" capable of splitting the Euro-Atlantic community even at the level of transatlantic relations as a whole.

"Hope" in Washington and fears in Yerevan

It is important that the Turkish troops' invasion of Syria, their direct involvement (as well as through proxy units) in the civil war, was part of Russia's agreements with Turkey. And such a "game of geopolitics" in Syria, against the backdrop of spilled blood in Armenia, gave rise to an association with the events of centuries ago.

While Moscow, a strategic ally of Yerevan, withdrew only "general concern", clearly rubbing its hands with the anticipation of annoyance in Washington and European capitals, the official Yerevan invasion of Turkey into northeast Syria called it an invasion.

In Washington, the “Armenian question” was raised again after many years of blockade at the federal level (even amid recognition of the Armenian Genocide by congresses of 49 states out of 50 and city assemblies of the largest US metropolitan areas). And in the House of Representatives, controlled by Democrats (the same one discussing impeachment against President Trump), on October 30, a resolution was adopted to recognize the Armenian Genocide in the Ottoman Empire, which shocked Ankara. A parallel resolution of similar content was presented three times in the Senate and blocked three times by Republican senators because of "untimely". And for the first time, Senator Lindsey Graham has openly stated that he made the decision after meeting with Trump and RT Erdogan, and "he was asked to do so."

On the fourth attempt, however, the resolution passed in the Senate, unanimously. Obviously, while raising the issue now at the level of the White House, Washington demonstrates "hopes" that RT Erdogan will nevertheless refuse close military cooperation with the Russians. However, the clearly mutually exclusive interests of Ankara and Washington in Syria make compromise impossible for Erdogan without losing face, which is even dangerous for his domestic political positions.

This may mean that in the time of RT Erdogan's leadership, Turkey does not have to expect a positive change in relations with the US, and one can only wonder how deep the split can go. In turn, this could open up a "field for activity" for Russian diplomacy. And, as Russia has repeatedly done, Turkey can be represented if not a convenient "anvil" for the Russian "hammer", then a convenient scarecrow. Fortunately, RT Erdoганan, with his irresponsible statements in a permanent regime, is only able to “justify” all possible Russian “arguments” flavored by aggressive propaganda, either in Armenian or Georgian directions. (Statements that the events of 1915, which resulted in the destruction or deportation of the Armenians, "were the only reasonable decision at the time"; statements that "the Turks should be returned" to Georgia, etc.).

In this regard, the concerns in Yerevan are quite solid, especially against the backdrop of the lack of a US regional strategy in the South Caucasus as a whole - as well as of the European allies - as well as a generally clear strategy to contain Russia and Turkey. And that situation appears to remain at least until November 2020, when the US presidential election ends. And it is far from the fact that there will be clarity immediately after that.

Official Yerevan's menu of options seems rather limited, but it is effectively used. First of all, this is the development of cooperation with Moscow in the military-technical sphere (after all NATO's 5th article is not yet in Georgia, but only in Turkey), diversification of foreign policy, security policy and foreign economic policy, while maintaining equal relations with Moscow in order to not to cause scenes of "geopolitical jealousy", but also to explain the motives of their steps.

Secondly, preventing Turkey's political activation in the South Caucasus region, especially in the process of a peaceful settlement of the Nagorno-Karabakh conflict. Although a possible Russian-Turkish "painting" may be an acceptable scenario for Baku, but for obvious reasons it is completely unacceptable for Yerevan.

Third, the deepening and strengthening of relations with Georgia and Iran, which is in principle a day-to-day work and one can speak of certain positive dynamics.

Fourth, close cooperation with the EU and the US as a major external resource for technological and institutional development.

Fifth, rapprochement with Turkey's neighbors, who share our fears, and in this direction there is also progress - with Greece, Cyprus, Israel, the Arab world.

However, all this can work when there is an adequate internal strength reserve. The internal environment corresponds to the set goals, and in this direction opportunities have been opened as a result of the velvet revolution, which are gradually being realized.

The successful opposition of Ukraine and Belarus to Moscow's imperial ambitions is a favorable factor. Without addressing its imperial tasks in these areas, Moscow in the South Caucasus appears to prefer a strategy of maintaining the status quo with the tactics of "local stabs" in the logic of intelligence combat. And in this regard, there is a common field of interest with Kiev and Minsk in bilateral and multilateral formats. But this is already a topic for a separate conversation.

Aidar Amrebayev: Implications of US troops and coalition withdrawal from Afghanistan for regional security