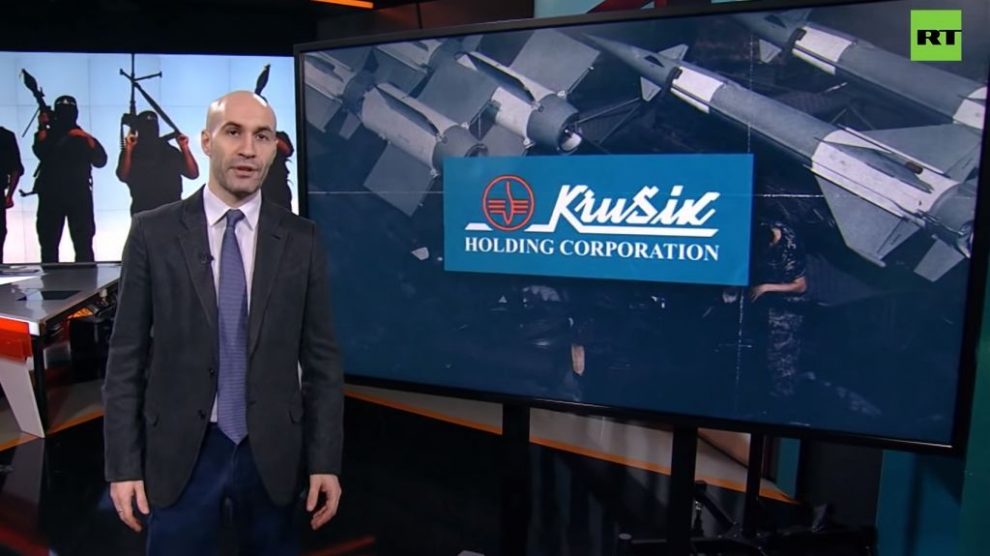 In recent days, two high-profile scandals have erupted in Serbia's hearing. The spy scandal, as well as the related scandal surrounding the Krusik defense enterprise, the threads of which appear to be reaching the Kremlin.

It all started in September this year when on the website Arms Watch, created and run by Bulgarian journalist Diliana Gaitandzhieva, a series of materials were published about weapons produced at the Serbian Krushik factory, with the blessing of the USA sent to Saudi Arabia and the UAE, and then to ISIL fighters. 21 November saw the release of the new Arms Watch article that the Serbian gunsmiths are also supplying their products to Ukraine, where it should be used against the Donbas. In Serbia, this publication has received particular publicity, as it turned out that the exporter of these weapons (mortar shells) was a company GIM, which is associated with Branko Stefanovic - the father of the current Minister of the Interior, Nebojsa Stefanovic. The documents published by Gaitandzhieva state, in particular, that GIM purchased products from the manufacturer at a much lower price than other companies, resulting in the loss of at least 30 million by the state, according to estimates by local media.

As a result of the investigation, an employee of the aforementioned Krushik, Alexander Obradovich, was allegedly arrested on espionage activities and allegedly passed on information to a Bulgarian journalist.

The scandal surrounding the Krushik plant gained more publicity when it was picked up by the opposition and other media reported. And it was top news in Serbia until a couple of days ago, a video with two people exchanging gifts and, quite possibly, money appeared on an unknown YouTube account.

As it turned out, one of the people on the video is a former employee of the Russian Embassy in Belgrade, George Kleban, and the other is an unknown citizen of Serbia. Following the release of the video footage, President of the country Alexander Vucic called a meeting of the National Security Council, after which he stated that he would talk to the Russian ambassador about the incident and its illogical nature, because, in his words, "Serbia does not violate Russia's interests in any way," He also expressed his hope that the Russian president was unaware of this. The reaction of the Kremlin was the words of Russian Foreign Ministry spokeswoman Maria Zakharova that the "spy scandal" in Serbia looks like a "provocation before high-level meetings" and that she does not understand the concern of the Serbian head of state.

In turn, for many in Serbia, the great publicity that followed the scandal surrounding the Krushik plant, the so-called. The "spy scandal" looks pretty weird. And first and foremost because he has lost his relevance since the events on the video took place a year ago, and he is not as important as they are trying to show him, since there are far more important Russian-related figures in the Serbian leadership . At the same time, given the resonance of the previous scandal, there is an opinion among the Serbian public that the "spy scandal" is quite likely an attempt by the Serbian authorities to divert attention from the unfavorable "Krushik" case, which exposes her to the slightest. very good light.

Both Serbian scandals, despite the resonance they have created in Serbia, are interesting not only because of the so-called "scandal". their development and mentions in one of them Ukraine, but also because of what they actually started from. That is - the Bulgarian journalist Gaitandzhieva, who, as it turned out, is a rather interesting person.

Bulgarian citizen Diliana Gaitandzhieva positions herself as an independent investigative journalist. In 2011-2016 she worked on the Bulgarian TV7 TV channel, where she often conducted “journalistic investigations” against the enemies of the TV channel owner. After the liquidation of the TV channel in 2016, she went to work for the Trud newspaper, where she worked as a correspondent in the Middle East until her release in 2017, through the publication in the same newspaper of materials on the supply of weapons to Bulgaria by Syria for opposition to the Bashar Assad regime.

At the beginning of 2019, she founded the aforementioned Arms Watch website, where she began actively publishing "investigations" with a frankly anti-Western, primarily anti-American, color.

It was quite "popular" in the 2018 year, when its "investigation" into the development and testing of chemical and biological weapons in US bio-laboratories located in third countries, including Ukraine and Georgia, and the involvement of Americans in the so-called "Skripal's affairs" were actively propagated by Russian propaganda.
So, in the period from 16 January to 18 September of that year, Gaitandzhieva's cycle of materials on this subject was published on the website naturalblaze.com: (link, link, link).
The first article on this site from this cycle is titled «Explosive Article: The Pentagon Bio-Weapons» was also posted on other foreign pro-Russian resources. In particular, it was translated into Italian and published in web page well-known Italian pro-Russian journalist Maurizio Blondet, author of the book Being with Putin ?, and used in material on the subject Norwegian pro-Russian blogger Paul Steigan.
In addition, this article has been published on other dubious anti-Western and pro-Russian portals (blogs) (link, link, link, link).

Also, materials about the infection of Ukrainian citizens by viruses that allegedly originated from the secret bio-laboratories of the USA located on the territory of Ukraine Gaitandzhieva also posted on her blog dilyana.bg (link, link).

Interestingly, the aforementioned Gaitandzhieva publications on the US bio-lab were published during the assassination attempt of a former Russian special services officer, S. Skripal, and the active phase of the investigation into the incident, and were then used by the Russian Ministry of Foreign Affairs as evidence of Russian involvement.

Also, the Bulgarian investigator actively interviewed and commented on the above topics for Russian propaganda resources of various levels, such as RT (formerly Russia Today) or hosted in Crimea by Russian Front News propaganda resource and its Bulgarian branch bgr.news-front. info:

Complementing the picture of the "independent" Bulgarian investigative journalist Gaitandzhiev, one should also say a few words about the TV7 channel, on which she worked hard at one time. The fact is that TV7 had a reputation in Bulgaria as defending the Russian so-called. against Ukraine and Syria and was considered an element of the Russian hybrid war.

The then owner of the TV channel Tsvetan Vasiliev had close contacts with the head of the Bulgarian movement "Russophiles" Nikolai Malinov, who is now suspected of espionage in favor of Russia, as well as with the Russian "Orthodox oligarch" Malofeev.

At the end of 2014, the resale process began around TV7, which was in debt. The buyer of the TV channel was the unknown company "Primeedia" of Burgas businessman Asen Asenov, who is the business partner of the main Bulgarian Russophile Malinov. However, according to Bulgarian journalists, Greek citizen Gyanis Karageorgis, who is considered to be a convinced Russophile in Greece and is the godfather of the oligarch Malofeev, became the real owner of the TV channel. Malinov, prior to the closure of the channel in 2016 year, held the position of chairman of the board of directors.

That is, as you can see from the above, the threads from both Serbian scandals reach the Kremlin. Most likely, it was not Serbia that was its primary goal. The ongoing scandals surrounding the Krushik plant and the so-called The "spy scandal" is likely to be the result of Russian special measures being taken to discredit the United States and portray them as the world's sponsor of terrorism and the culprit in all the world's troubles. For the true violator of the world order - modern Putin's Russia - is the usual "translation of arrows". Serbia, in all this, has fallen victim to its "Slavic brothers". Although it should be ruled out that it was another Kremlin strategist's move, aimed at "appeasement" of the Serbian president, who became involved with the West, it should not be. In any case, what is happening in Serbia today is playing to the Kremlin's hand as it creates an additional lever of influence for her and for Alexander Vucic personally.