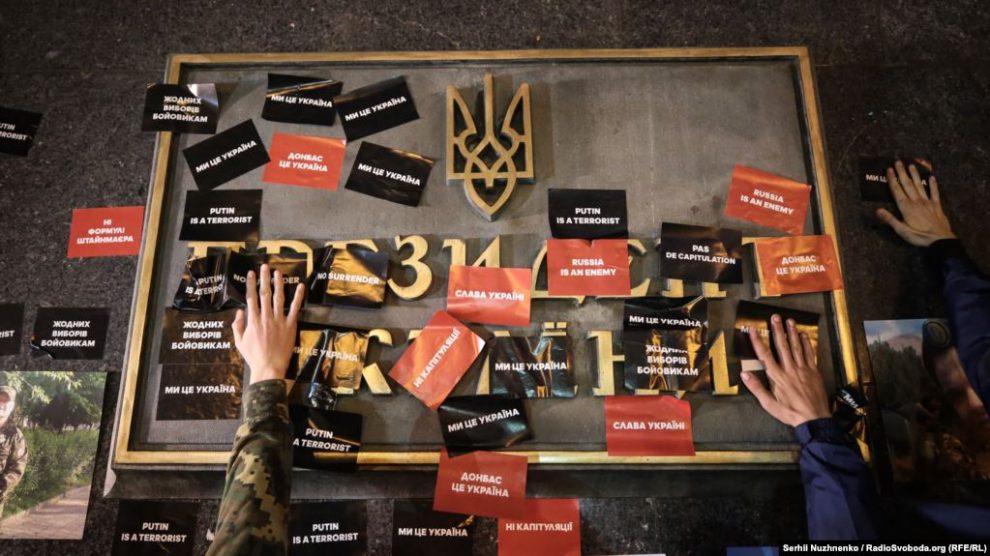 1 In October, President Vladimir Zelensky took the first step in a minefield of diplomatic relations with Russia. Having agreed on a single version of Steinmeier's formula, Kyiv went to meet Moscow's demands for the Normandy Four. The algorithm envisages the entry into force of the law on the special status of the Donbass after the local elections, the legitimacy of which, including compliance with Ukrainian law, must be confirmed by the OSCE. The implementation of plans related to the electoral process in the occupied territories is a matter of the future, which is hidden beyond the event horizon.

Instead, the agreement that the parties had to fulfill at the current stage (about the deployment of forces in Golden-4 and Petrovsky) remains unworkable today. The Tripartite Contact Group (TCG) was unable to reconcile the new breeding schedule again.

As the process has stalled, diplomatic dividends have not been discussed either. Despite Kiev's concession, the Kremlin is delaying a meeting of four leaders. Obviously, the Russian leadership is satisfied with the internal political effect of Zelensky's compromise tactics. The opposition, to which the Ukrainian authorities have been affected, weakens Kiev's negotiating position. Unsuccessful were the attempts of the Zelensky team to expand the circle of allies at the dialogues. At the same time at Brussels does not hide - EU sanctions limit on Russia is virtually exhausted, so sabotage in the Ukrainian direction does not threaten Moscow with new restrictions. Under these conditions, the Kremlin painlessly maneuvers, putting forward new and new demands. The fulfillment of these prejudices rests on the shoulders of the imperfect power in Kiev, which does not feel the strong support of the West.

By agreeing to Steinmeier's formula, Zelensky entered the maze of the Minsk process. The parameters were pre-arranged by advisers from leaders in Germany, Russia, Ukraine and France in mid-September. However, the official Kiev did not decide to sign the document on the first attempt.

On September 18, within the framework of the Tripartite Contact Group, the head of state, Leonid Kuchma, refused to sign the document. The ex-president was motivated by the fact that the topic of election in the ORDLO may provoke public resistance in Ukraine. The head of the Ukrainian Foreign Ministry Vadim Prystayko explained the failure of signing technical problems, without resorting to clarification of their content.

Obviously, the main reason for the delay is Vladimir Zelensky's visit to the United States within the framework of the UN General Assembly's 74 session. The "cloak" of the UN program of the Ukrainian president was a rendezvous with his American counterpart Donald Trump. September's revitalization of the negotiation process by Kyiv was largely fueled by a desire to win Trump's support ahead of talks with Putin (this was especially important against the backdrop of reports of a slowdown in financial assistance in Ukraine's security sector). In the leadership of the faction "Servants of the People" even said that the new team "will cope" by December with the extension of the negotiation format through the involvement of Washington and London.

Zelensky flew to New York without a draft roadmap for the Donbas, which the White House owner could "sell" in an election in the wrap of another geopolitical twist of his administration. After all, the electoral value of such a "victory" could hardly have seriously interested Trump, since the issue of Ukrainian-Russian relations in no way bypasses the American voter. Another is the scandal surrounding the alleged pressure from US President Zelensky to investigate the possible lobbying activities of former US Vice President Joe Biden in favor of Burisma Holdings.

For the first time in recent years, the topic of Ukraine has burst on the frontlines of the world media. But the context (meddling in the US election) proved most inconvenient for Kyiv. problems of Russia's aggression and assistance in reforming our country remained on the periphery of Western observers. Moreover, the White House's transcript of a July telephone conversation between the two presidents - an unprecedented case in diplomatic practice - turned upside down all expectations of the Ukrainian side. Kiev failed to "pin" Ukrainian issues to Trump's desktop. Therefore, on this initiative, the involvement of Washington and London had to be curtailed and put away. The text of the Steinmeier formula was signed unchanged.

The attempt of the Zelensky team to “shake up” the Minsk process received serious resistance from the “home” opponents. The main attack on the President is that by approving the Steinmeier formula, he seemed to agree to hold elections in non-controlled territories without addressing security issues.

Protests in the capital and in the regions are a good opportunity to play the lost positions for certain groups of influence that have been sidelined by political processes following the "electoral revolution" of 2019. During the first weeks of October, they actively outlined the spirits of street protest. The motto of resistance to Zelensky's policy has become the eloquent "No surrender!", Which can be easily "glued" to the next initiatives of the authorities, dictated by the course to preserve the fairway of the Minsk agreements. It is worth noting that the probability of a new Maidan is not yet discussed. Actually, the leaders of protest actions do not force events. Support for the head of state is at the height of 70%, while in the opposition camp we see a crisis of leadership. After all, not all players are determined by their opposition, some are closely watching the central barometer of Ukrainian politics - the presidential rating.

An alarm bell for Bankova should sound a demarche of local councils - against the "Steinmeier formula" deputies of the Khmelnytsky, Ivano-Frankivsk, Lviv, Ternopil oblast councils, Kropyvnytskyi city councils, Sumy, Kherson, Lutsk and other cities made speeches. The approach to quenching the conflict in the style of the President of the Office of the President, Andrew Bohdan ("the actions are paid, so it is worth" click "on the organizers and the problem will come to naught") opens to Zelensky a narrow path paved with rakes left by the presidential fugitive. "Servants of the people" first met with organized resistance of a part of society. Compared to the silent majority of "loyalists", this group loses quantitatively, but has great mobilization potential.

In the "kit" with the "Steinmeier formula" was agreed to deploy troops in the settlements of Golden and Petrovsk. Head of the General Staff, Commander-in-Chief of the Armed Forces of Ukraine Ruslan Khomchak informed about the already approved plans for further deployment of troops. According to him, the Ukrainian units should move to the same positions they occupied in 2016 year. According to Bogdan Bondar, the Deputy Commander of the Joint Forces Operations Headquarters, the country's military-political leadership is considering several plans to redeploy units. Among them are those that foresee the entry into the demilitarized zone of a number of settlements that are now under the complete control of the Ukrainian authorities (Experimental, Svitlodarsk, Crimean, Pavlopil, Katerynivka, Lugansk). However, such a withdrawal of troops is possible only in the event that similar actions will go and the enemy - says the command. As for the "test ball" in Golden and Petrovsky, the position of the Ukrainian authorities is as follows: Dilution of forces and means is only possible after the OSCE SMM confirms compliance with the silence regime at the breeding grounds for seven days.

However, not only provocations of pro-Russian fighters can interfere with the implementation of these plans. The internal resistance factor also influences developments in the Gold. In early October, veterans and volunteers resorted to blocking the process, making statements about their readiness to defend their positions in the event of Ukrainian military withdrawal.

A positive signal is that Zelensky has demonstrated a readiness for dialogue - a meeting of the President with representatives of the organizations creating a movement against the initiatives of the authorities has taken place. However, there was a lack of understanding. The authorities did not make any counter-arguments about the symmetry of the process: in the face of mutual total mistrust of the parties, OSCE observers 'reports appear to be a very convincing guarantee of compliance with the occupiers' agreements.

The president faces a difficult dilemma - whether the authorities are ready to fulfill the conditions that will have to be borne in the Normandy format, at the cost of a fierce conflict with former veteran volunteers?

By the way, the situation has somehow played into the hands of Interior Minister Arsene Avakov. In fact, it is not a good idea to hit pots with an influential minister when noisy demonstrations take place almost every day under the windows of the President's Office. Especially if this official has influence (at least indirectly) on a number of members of the National Corps. The beneficiary of Avakov was the inhibition of the initiative to re-subordinate the National Guard to the president: the Verkhovna Rada sent a bill to finalize it.

Communication and tactical gaps in power

Surrounded by the president, they identified without delay their major blunder in the first months in power - failure of communication strategy (they say, people just didn't have time to explain all the nuances of diplomatic maneuvering than the unclean predecessors used). The head of state took the blame for the blame. For this, the grueling format of the 14 Hourly Marathon “300 Journalists / 500 Issues” was selected. On the whole, it is quite symptomatic, because today almost all communication artillery of the authorities is firing on the fears of the society regarding the legalization of Russian intervention in the Donbass. The government is trying to convince the public that security priorities remain in its focus. Leitmotif - recent arrangements in Minsk decipher a political item on elections, but implementing it must go a long way to ensuring proper security conditions.

Now it is too early to talk about a compromise between Kiev and Moscow in the issue of local elections in the Donbass. Significant contradictions remain regarding border control, demilitarization and peacekeeping. The Ukrainian authorities have no substantive answers to a number of other challenges: participation in the election of newly minted Russian citizens, securing the voting of temporary migrants, the possibility of new rounds of confrontation…

Instead, the risks involved in Banking tactics are quite obvious. Firstly, through local elections Russia gets an opportunity to put war with Ukraine on the line of "civil" conflict. Secondly, the Kremlin continues to push Kyiv into a direct dialogue with the separatists - at the same time putting forward political demands in Minsk and blocking the security component through its puppets in the ORDLO. Thus, both leaders of the Donbas pseudo-republics opposed the Ukrainian demand for border control. But the fresh opus of Putin's press secretary Dmitry Peskov ("The Kremlin certainly has some influence on the Donbas republics. But you know that the Donbas republics are independent entities in resolving this conflict") is another reminder to the Ukrainian authorities. that reconciliation is possible only if Kiev publicly acknowledges the absence of external aggression.

Eventually, The mechanism for recognizing the democratic nature of the ORDLO elections is of concern. By delegating this right to an international organization (OSCE), Ukraine actually trades in its own sovereignty.

The policy of Zelensky's team sharpened the question of the conditions of reintegration of Donbass. Probably, this dilemma is perhaps the most acute in Ukrainian politics: it is capable of opening up society. Results of an October poll of the Razumkov Center show that 56% of Ukrainians oppose the Constitution «special status» separate territories of Donetsk and Luhansk regions. Support the de facto autonomy of the ORDLO 26% of respondents. Another requirement of Minsk, which is imperative for Moscow - the amnesty of fighters - also causes rejection among most respondents (59%). Such sociology shows that the vicissitudes around the "Steinmeier formula" are only a prelude to the confrontation over the new wording of the Law on the Special Status of Donbass.

CDACR participated in the Ukraine-NATO-EU International Round Table: Focus on Information and Cyber ​​Security