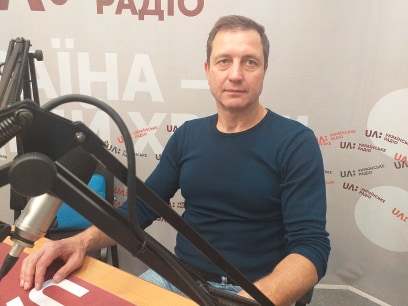 The Defense Intelligence Division of Ukraine has prepared a number of scenarios under which the security situation around Ukraine may develop. How can the war end and what can the Kremlin expect to do next?

Assistant to the Head of the Presidential Office of Zelensky Ivan Aparshin stressed that the Armed Forces of Ukraine and the country as a whole should prepare for possible aggression by the Russian Federation. Aparshin reports that the Armed Forces of Ukraine's Chief Intelligence Directorate has prepared eight scenarios under which the security situation around Ukraine may develop

Representatives of other organizations have talked about several scenarios of this situation, in particular, Valentyn Badrak, writer, director of the Center for Army Studies, Conversion and Disarmament Studies (CDACR), board member of the Ukrainian Institute for Security Studies. Today, Mr. Valentin is a guest of the Public Radio studio.

Despite the ceasefire, Ukraine has recently suffered heavy casualties, with shelling killing 4 troops, the number of shelling has decreased and the number of casualties has not. Does this mean that the fighters have increased their activity?

Valentin Badrak: I would say that it's not the fighters, it's the Kremlin. And the Kremlin is counting on the fact that the low-intensity war, which will continue on an ongoing basis, is a means of forcing Kiev to sit at the negotiating table with terrorist organizations run by the Kremlin. Of course, Ukraine cannot agree to such a scenario.

Concerning the potential military threats to Ukraine now, it should be agreed that the Defense Intelligence Directorate has thoroughly examined the situation and for the first time in Ukraine's history has prepared a document of this level - mid-term planning for 10 years. We agree with this document that there are indeed great threats, moreover, I would say that the threat of a full-scale war remains the kind the Kremlin holds. That is, the Kremlin has every opportunity to use high-precision weapons at long distances, to use planes, helicopters carrying appropriate missiles. There are four airborne divisions along the perimeter of the borders with Ukraine, in the south it is the seventh "bloody" division that has experience of the war in Chechnya. So we have something to think about.

However, with all this I would not scare anyone. We just have to prepare for war, not just for war, but for the war of the future, and this requires certain priorities - how to act and what to do.

Victoria Ermolaeva: What is it - the war of the future?

Valentin Badrak: The war of the future will be characterized, first, by the transfer of war bases into the air, even into outer space. And today the United States, Russia and China are taking the lead in space warfare and using laser weapons to destroy satellites and the like. In addition, it is about the defeat of communications, it is about huge information flows, about how to affect first of all the human consciousness. And here, if we look at what Putin needs, whether he needs nuclear ash on the territory of Ukraine, or he needs a vassal territory that will be controlled by Russia's foreign policy and go in the wake of that policy, then we agree that this is times the second situation. Therefore, we emphasize that a full-scale war can be exclusively after the failure of the attempt at revenge.

The Kremlin now has new background data: pro-Russian forces in parliament received about 13% of votes. Therefore, the risks posed by a heterogeneous society cannot be ignored. I am not saying that it is split, but it is heterogeneous. In such circumstances, we must go the way of articulating our vision of the development of non-military levers: intelligence agencies, counterintelligence, and information structures. Then we talk about asymmetric weapons: missile capabilities, special forces, and special operations forces.

I personally think that Ukraine needs to solve one more thing. Namely, these are private military campaigns. I know that during the presidency of Poroshenko there was a certain fear of this. Oligarch Poroshenko himself feared that other oligarchs might have private armies. But if we passed a law on private military campaigns and put them under the control of the state, we could get a very significant lever to conduct sabotage measures, including in the territory of the enemy. But when I said it out loud, we got a fitback in Russia, they say, Ukrainian experts called for terrorism. That is, Russia is misinterpreting information, and in the context of our statements, it is making its own information operations. Although we are not talking about terrorist acts against the Russian population, on the contrary, we consider the Russian population to be our potential ally, it is simply under the influence of the propaganda Russian machine today, and there are certain problems with perception. Although, I think that already over 30% of Russians understand everything, see everything, see the impasse of Putin's politics, but they fear because Russia is an authoritarian state with a huge repressive machine, where anyone can be thrown behind the bars. We saw examples of direct intimidation of the Russian people in early August, when they were detained at 1700 protests.

Victoria Yermolayeva: According to the Ukrainian intelligence, this month militants are secretly moving armored combat vehicles to the line of contact for the distance of fire damage to positions of units of the OOS. And one-third of the silence regime violations currently occur with the use of prohibited heavy weapons. It turns out that we do not shoot, but on the other hand, the silence mode is constantly broken. What can this tactic lead to?

Valentin Badrak: Such tactics can only be temporary. My vision is this: there can be no order for the military to remain silent if fired upon. Each attack must be answered. But the answer must be very accurate. Of course, this is not always possible, because militants often cover themselves with civilians, place their weapons directly in settlements, and expect them to be covered. However, even in such circumstances, it is important that Ukrainian soldiers can act on bias. The technological level must allow such advantages to be achieved that, during the deployment phase of an enemy unit or unit, they are simply destroyed. This requires that the Ukrainian army be able to fight day and night, and also receive such intelligence systems, information processing systems, targeting systems, to eventually create an automated digital army in Ukraine. This can dramatically increase the strength of the troops and allow them to respond at the bias level.

In general, when I talk about redefining priorities, we must say that, unlike in Russia, we have the life of a soldier or an officer to put above all things above all else. And to help a soldier, officer or sergeant provide advanced technology: unmanned aerial platforms, upgraded helicopters so they can fight at night and more.

Victoria Ermolaeva: Presently, the president and the new parliament have a difficult task: to keep the trust of those who voted for the Servant of People and President Zelensky on the one hand, and who want peace, on the other hand, to give a normal fight to the enemy and increase forces. What are the steps of the president here?

Valentin Badrak: Peace can now be achieved only through political and diplomatic means, and there is no other way. But the main thing for every Ukrainian to realize is that a stable peaceful Ukraine can only exist and develop if there is a powerful, high-tech, mobile, digital, automated army.

If we are ready to devote our resources to this, to support soldiers, sergeants, officers, then it can be. If not, then, as in the armistice, any achievement of peace will be very shaky if Ukraine remains such a vulnerable target. We cannot remain vulnerable, so we must prepare for the war of the future. To keep the peace.

You can listen to the full version of the conversation on the site Public radio.