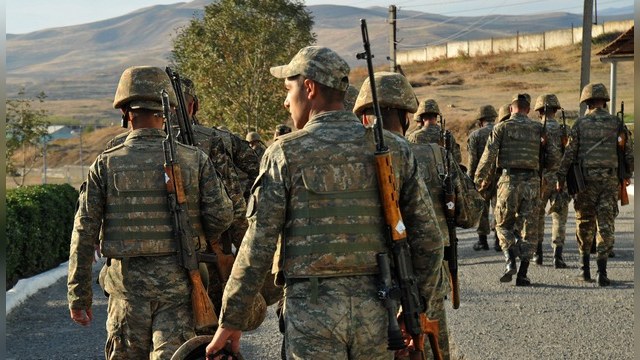 After Washington meeting Foreign Ministers of Armenia and Azerbaijan 20 July this year from the head of the Azerbaijani foreign ministry was declared that the (quote) “the Armenian side raises the issue of security, the status of Nagorno-Karabakh every time. As for security, peacekeeping forces may be deployed in the region. Co-chairs need to work on that. ”

Elmar Mammadyarov also told 24 in July that during the talks in Washington, the co-chairs of the OSCE Minsk Group had re-submitted those documents that had already been discussed. “We are currently working on a basis Co-Chairs statement from 9 March».

First of all, what is the statement that the OSCE MG Co-Chairs made on that day regarding peacekeeping forces? Quote:

“Referring to some controversial recent public statements on the merits of the Minsk Group process, the Co-Chairs reiterate that a fair and lasting settlement should be based on the basic principles of the Helsinki Final Act, including in particular the non-use of force or threat of force, territorial integrity . It should also include additional elements proposed by the Presidents of the Co-Chairs in the 2009-2012 years, including: the return of the territories surrounding Nagorno-Karabakh to the control of Azerbaijan; temporary status of Nagorno-Karabakh providing security and self-government guarantees; a corridor connecting Armenia with Nagorno-Karabakh; the determination in the future of the final legal status of Nagorno-Karabakh through legally binding will; the right of all internally displaced persons and refugees to return to their former places of residence; and international security guarantees that will include a peacekeeping operation (highlighted by the author).

The Co-Chairs emphasize their view that these principles and elements should form the basis of any just and lasting settlement to the conflict and should be considered as one. Any attempt to put some principles or elements above others will make it impossible to reach a balanced solution. ”

Leaving aside the whole complex complex of the multifaceted problem aside, let us consider the peacekeeping issue separately, as the cast has left some misunderstanding in the media space. In fact, it turns out that a kind of reminder by the Co-Chairs of the Minsk Group of the basic principles and additional elements, including the peacekeeping operation in the future settlement process, served as a basis for Baku to renew a public conversation about bringing peacekeepers into the conflict zone? And besides, that in co-chairs statement The OSCE MG, which followed immediately after the Washington meeting, does not say this, and the Armenian Foreign Ministry a day later, 25 June this year. in his comments reported on a range of issues discussed during the meeting in Washington, and the issue of peacekeepers in no way included.

However, the issue has already managed to create some noise after it became clear that a number of Azerbaijani media in their reports on statements by the Foreign Minister of Azerbaijan presented a very broad interpretation of what was said, up to the fact that "the mediators offered the withdrawal of troops and the introduction of peacekeepers", and, he was the initiator Interfax-Azerbaijan, who then corrected the material, followed by other media outlets that published such a version of the statement. Elmar Mammadyarov, by the way, in his interview with the state agency Azertage from 24 June did not say a word about peacekeepers.

26 June Russian state propaganda resource Satellite-Armenia issued a publication, in which, citing different media references, the chronology of their appearance and correction, he rigidly "baptized" from such an idea, emphasizing that in reality the mediators did not offer anything like this.

The Western media and the expert community have not spoken at all on the topic of peacekeepers. And in a number of Russian "amateur" media there were only single "analytical" materials under the authorship of some engaged and, in general, marginal persons, who saw in the statement of the head of the Ministry of Foreign Affairs of Azerbaijan a "chance" to revive the ideas of introducing Russian "peacekeepers" in the conflict zone under auspices of the CIS, CSTO, etc. They also saw the sign that Baku was “ready to discuss” the idea, and now the “word for Yerevan”. In doing so, the “ball” was initially false, as it turned out, to throw the agenda on the field of Armenia. ("International peacekeepers may appear in Nagorno-Karabakh", "Regnum", 24.06.2019 d).

Was such a throw-in a short-term probing, and how much does it relate to the progress of the negotiation process? It seems possible that the two-day promotion of the topic in the media field, however, was aimed at probing the possibilities of resuscitation of the "peacekeeping" scenario, for the realization of which the Armenian side had to "worry." This is just what is prescribed by the so-called "Lavrov plan". However, sounding by sounding alone is still not enough. Moreover, when they do not fit into the created realities, the main component of which is that with all the difference of positions and intentions - both parties to the conflict, and other regional and extra-regional actors - the appearance of the peacekeeping mission of Russia under any flag or sauce is not visible in the long run. may be considered a desirable development.

As we can see, a friendly baptism from the peacekeeping theme, even at the level of the conversation - both from Baku and then from Moscow, the harsh refutation of Yerevan - only indicate the impossibility of such development in the conflict zone.

Nevertheless, the peace agenda in the settlement process remains in the spotlight, taking into account the latest statements by the OSCE Minsk Group co-chairs.

It draws attention to the fact that, in the face of increasing confrontation between Russia and the West, when at all, practically, sites, they act from opposite and even mutually exclusive positions, the format of the tripartite co-chairmanship of the MG, including the USA, France and Russia, operates in a “warm and friendly atmosphere. " Moreover, on a case-by-case basis, the Russian side demonstratively signals that it does not and does not intend to make any "separate" efforts in the negotiation process and adheres to the spirit of consensus in "honest mediation".

Naturally, to explain this with purely good intentions would be wrong, and the position here, of course, stems from the assessment of their own regional interests, which in this situation so and so much does not threaten. Thus, Moscow is guided by the principle of "good - do not seek good", especially when the internal political situation and emerging developments in the short term, logically, do not suggest intentions to allocate additional resources for large-scale external campaigns.

However, the existing multi-level equilibrium in the conflict zone, based on numerous interrelated factors (internal and external), remains shaky and persists as some self-sufficient, self-regulating system even during periods of exacerbation, however, it needs and will need more effective mechanisms that the possibility of waging war.

The situation suits Russia in terms of the fact that official Baku refuses to introduce such mechanisms that can strengthen the termination regime at a whole new level. The speech, in particular, concerns the initiative of Congressmen Edward Royce and Elliot Engel, put forward on a bipartisan basis in the House of Representatives of the United States Congress before the outbreak of the Four-Day April War, including:

- increasing the number of OSCE observers,

The measures also include the introduction of mechanisms to investigate cases of ceasefire violations, as well as mechanisms for liability for such cases.

In the negotiation process, such measures were proposed at the Vienna 2016 meeting in May (immediately after the Four-Day April War) and set out in a corresponding statement by the OSCE MG Co-Chairs following the meeting. However, despite their acceptance by the parties, the matter did not come to implementation, the process was thwarted by Baku with Moscow's encouragement and the tacit condescension of Serge Sargsyan's regime.

The issue of Russian peacekeepers, the case that pops up from time to time, and the issue of implementation of effective measures to strengthen the ceasefire regime, eliminating the possibility of unpunished unleashing of hostilities, are closely interconnected and organically intertwined in the regional military-political landscape. The fact is that the implementation of such a set of measures, blocking the possibility of an unpunished undermining of the regional world, would open the possibility for real and gradual transformation of the conflict. And, consequently, the processes in the region that put him out of limbo ("neither war nor peace"), and the negotiation process to resolve the conflict would translate to a more realistic basis. The reason for this argument is that Russia, thus, seems to lose much of the leverage of exclusive influence on the sides of the conflict: Baku would not be so motivated in the large-scale acquisition of Russian weapons, and Yerevan would close Moscow's opportunities for all sorts of "obscene proposals "using blackmail with the resumption of war. For Moscow, this would mean the end of even theoretical opportunities for a hypothetical peacekeeping operation in the region with its dominant involvement.

However, at the moment, the reality is that the current state of affairs continues to work for Moscow and has only a theoretical chance of change. Two other co-chairs of the Minsk Group - Washington and Paris - do not want to change the status quo in the region and the current "vivendi" modus with Russia within the format, in turn, appreciating the fact that it is the only one where the partnership is still maintained. .

The idea of ​​introducing a peacekeeping mission to the region under the actual auspices of Russia, therefore, for the above reasons, as well as other reasons (connected, including, with the open reluctance of Iran to see any "alien" forces in the immediate vicinity of its most stable - the northwest border) seems almost unworkable. And the main factor that makes such a development impossible is the similarity of the positions of Yerevan, Stepanakert and Baku in that peacekeepers in the region (especially Russian) have nothing to do. Speculating and warming expectations is possible, but to realize - see above ...

Ruben MEGRABYAN, Expert of the Armenian Institute for International Relations and Security, editor of the Russian-language version of "Aravot", Yerevan, Armenia

Serbia: Victim of involuntary Russian special measures against US