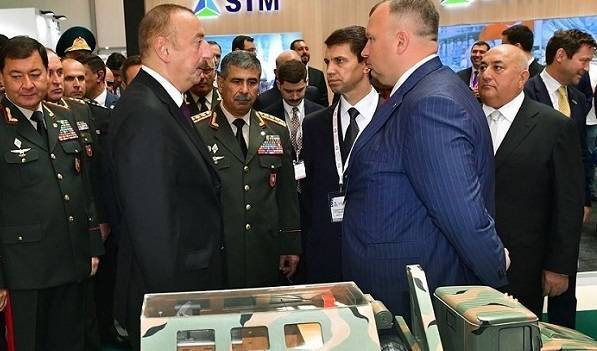 Interview Armiya.az with the head of the South Caucasus Branch of the Ukrainian Center for Army Studies, Conversion and Disarmament Vladimir Kopchak.

Actually, the fact of meeting with the new ambassador of Ukraine the head of the Defense Ministry of Azerbaijan speaks for itself. I consider it a positive and significant moment, even if it was just a protocol meeting.

The cooperation in the military sphere between our states can have the widest range of directions. In the end, both Ukraine and Azerbaijan are warring countries, both here and you have occupied part of the territories, with which Kiev and Baku do not intend to put up. So, at least at the level of consultation between defense and diplomatic agencies, a variety of issues can be discussed. From coordination of joint efforts in the international arena on the de-occupation of territories (despite certain, let's say, "nuances" and problems) to the actual experience of warfare, the use of modern weapons in combination with the technique of Soviet development, the system of combat training and so on ... This series can be continued. How profoundly such work is being done is difficult for me to judge, but we have a very wide field for expanding military cooperation.

Cooperation between specialized expert organizations of Ukraine and Azerbaijan, both state and non-governmental, could be a separate direction of work. Here, as for me, the potential and close is not realized. In time, I will only be glad to be wrong.

In the 90 years, Azerbaijan actively purchased Ukrainian weapons and equipment. What could be of interest to the Azerbaijani Army from the products of the Ukrainian military-industrial complex today?

Azerbaijan is still one of the main partners in the field of military-technical cooperation (PTC) for Kiev today. Another issue is that today, in principle, we cannot maintain the level of cooperation in the defense and industrial sphere at the level of the late 1990-ies. Due to objective and subjective factors. In its time, Azerbaijan, with its financial resources, made a bid to acquire Western high-tech weapons with a parallel development strategy - almost from scratch - of its own defense industry. Only the large-node assembly is involved, but the process is running and it is irreversible.

For Kiev to stay and develop in Azerbaijan's defense market is both a challenge and a marker of the sustainability of the national defense industry at the same time.

State concern "Ukroboronprom" declares the transition to innovative development - the inertia from the production, modernization, repair and maintenance of Soviet / post-Soviet technology can not be endlessly exploited.

And here Baku with its defense-industrial policy for Kiev can be a natural and comfortable partner. Spheres of cooperation can be very different - aviation, armored (systems of active, dynamic protection), ammunition industries and so on. It is important that it was not only about supporting old projects and developments, but also about developing joint developments - both in the interests of Baku and Kiev, as well as in third countries. What is important is technology transfer. And with this approach, the most unexpected directions for cooperation may emerge. Our PTS can be built not only in the format Kiev / supplier - Baku / recipient. Why not, for example, work on the topic of drones in the Ukraine-Azerbaijan-Turkey triangle…

From the last interesting trends, I will highlight the prospect of Ukraine's participation in Azerbaijan's ammunition program, in particular, the organization of the production of individual ground artillery components for ammunition. In turn, Ukroboronprom is interested in acquiring ammunition and melee systems in Azerbaijan.

Of course, serious military-technical projects and deals are almost always a consequence of political decisions. Today, I can say that Kiev does not have any political "prejudices" or barriers to Baku regarding the development of the PTS area.

How do you assess the prospects of Ukraine joining NATO?

The question of the actual date of Ukraine's accession to NATO today is not worth it, I generally consider it secondary. It is important that the course in the EU and NATO is constitutionally enshrined. And this is not about dates, but about standards and approaches to the security system, about basic choices - civilizational choices, if you like. In due time, Ukraine did not officially receive the MAP status regarding NATO membership, in fact it fulfilled this plan.

Today, the process of forming and strengthening the state's security sector as a whole, by NATO standards, continues. This is the widest range of directions - from the philosophy of the control system to the smallest details in providing a fighter. Fundamentally, this process Ukraine implements in a war. Therefore, at some points NATO may learn from us based on the experience of counteracting "hybrid" aggression.

We are aware that among the members of the Alliance today there may be very different opinions regarding Ukraine's membership. On this and other issues there is no unity and close. In the "hybrid" war, as practice shows, not only enemies but also allies can be "hybrid" ... Therefore, it is important for Ukraine to be ready to join the Alliance, so that at some point it becomes a "technical issue". And the geopolitical situation can change, including, and sharply.

By the way, all of the above is relevant for Tbilisi.

How popular is the military service in Ukraine today?

To serve in the Ukrainian Army today is prestigious and popular. The military today is the elite of society. I think it is not necessary to explain why, especially for the Azerbaijani audience.

… In the year 2014 Ukraine presented to the world the phenomenon of volunteers and volunteers, who during the most difficult period for the country closed a vacuum in the security system. When I talk about volunteers, I mean not only the members of the volunteer units (who were subsequently integrated into the structures of the Armed Forces, the National Guard and so on), but also those who personally came to the military enlistment office with or without a summons, that in that post-Soviet coordinate system it was possible to do quietly and without consequences. Such people became the backbone of the Army, created almost from scratch and in times of war. Today, the Armed Forces of Ukraine is a coordinated and working organism. Adequate system of all kinds of providing military personnel was created, which is important in terms of prestige of military service.

Of course, there are also problems, but if you compare with 2014 this year, these are problems of another order. Issues of the systems of control of troops and combat training which are improved, including, and from the experience of military operations remain relevant; adopting and adapting new weapons systems - in general, the whole set of issues tied to such a concept as the "professional army".

Ukraine has always maintained the territorial integrity of Azerbaijan. Today in Ukraine a new president. Will Kiev retain Azerbaijan's previous level of support for Karabakh under Zelensky's presidency?

Your question, as I see it, already contains the answer, and it is obvious. I do not see any prerequisites for the revision of approaches regarding the support of the territorial integrity of Azerbaijan under President Vladimir Zelensky. This is an axiom.

Another matter is whether Kiev and Baku will be able to somehow coordinate the policy of de-occupation of their territories in the international arena, whether there will be breakthroughs - I have some skepticism. At us all the same «clinic - one, but histories of illnesses - different». Azerbaijan, in approaching Moscow, sees the prospect of receiving dividends in resolving the Karabakh issue in its favor. And the question here is not how real this prospect is. However, to say that this does not in any way affect the joint policy of Kiev and Baku for the de-occupation of their territories would be, at least, naive…

Does the Kremlin have the right to interfere in Bulgaria's internal affairs with regard to World War II monuments?