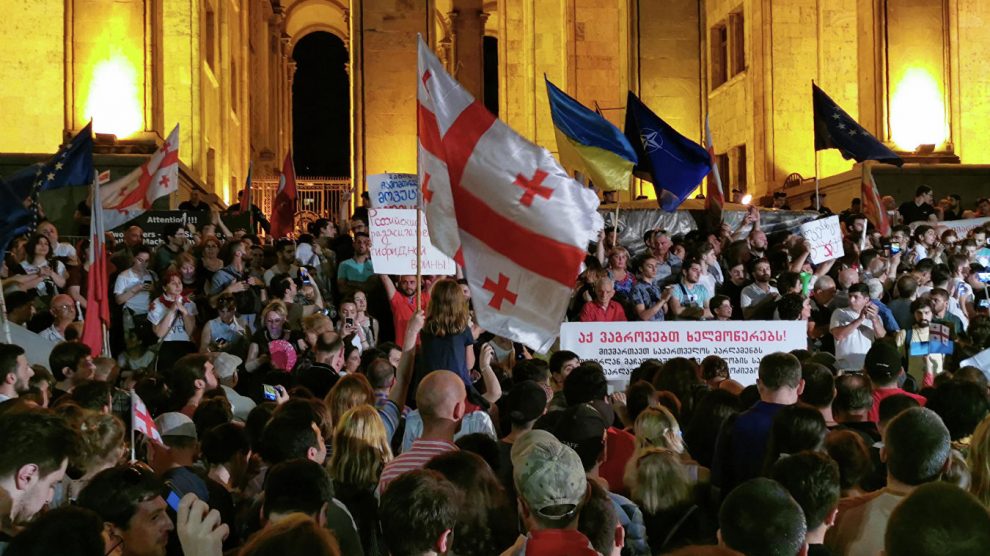 To be "half pregnant" in the question of confrontation with the aggressor is not obtained from "dreamers" in Georgia, it will not work out and "servants of the people" in Ukraine

You can consider me a paranoid, but I can see the general between Gabunia case in Georgia and our teleconference "To talk" in Kiev. I do not see the point to remind you of what I am talking about - I somehow truly envy the Georgians, the Ukrainians who do not know, or do not understand what they are talking about now (and they are) ... They are, to some extent, mentally healthier us, following all this trash

So, current crises in Ukraine and in Georgia are supported by very similar technological methods. And I'm not just about coincidence in time.

What we see now in Georgia and around it in the light of the Gaboon case:

1 Going to a downturn in Georgia (and most importantly - in Russia), after the incident with the Orthodox Communist Gavrilov, "Georgian Russophobia" gets a new impetus, however steep. Including, in the form of the necessary picture for the Russian audience.

2 The main demonstration in Tbilisi on Rustaveli Avenue against Russian occupation of 20% of the territory of the country (where, among other things, the main requirement is the resignation of Interior Minister Gakhariya), not only a protest against the LGBT march, but also more important than a protest against the main opposition and most influential television TV channel "Rustavi 2". And without that, the massive basic protest is blurring.

3 The Georgian authorities faced a problem - how to condemn Gabonia, but do this so that it is not necessary to apologize to Putin. How the authorities coped with this - it does not matter. It is important that she succeeded, with a new force, in playing with the new force the main and almost the only one of his trump card, which sounds like "all the problems and crises are the cause of the hands of the Saakashvili revanchists."

4 Whatever the mood, the Georgian society turned out to be a subconscious choice - are you against Putin, or against Gabon? It is clear that it is possible for some time not to love both of them equally, but still. The corresponding picture with the protesters in front of the office "Rustavi-2" was created.

5 Moscow (and not the dispersed Georgian opposition) is receiving dividends - in the form of a new reason for the sanction pressure on the official Tbilisi, which allegedly could be "deadly" for the Georgian economy. Mention is made even of wine, but for some reason the words "Inter RAO" or "Lukoil-Georgia" are not mentioned.

6 And in Russia and Georgia, soldiers of the information front of the Kremlin are excited, the whole line of defense / offensive is held by the entire Kremlin army up to the chairman of the State Duma Volodin. How - the king was offended. But here's a failure - Putin "suddenly" spoke against sanctions, and against the censure against Gabonia. Rat, of course, is moving on the move, but the technology "the king is wise against the boyars and servants" works. At a minimum, the Russian audience has been processed. Although why only Russian - the only true decision of Putin also calls the Georgian Foreign Minister David Zalkaliani ...

What we see now in Ukraine and around it in the light of the cancellation of the teleconference:

1 Zelensky's team is trying to maintain a powerful rating for his party "Servant of the people" before the upcoming parliamentary elections. Playing on the theme of peace, but moving away from the peaceful settlement of Putin Medvedchuk kum. The latter conducts a systemic purchase of television channels in Ukraine, one of which was drawn into a Kremlin provocation with a teleconference. Initially, it was clear that the bridge would not take place - there was enough provocation with the announcement, because it was clear that there would be an appropriate reaction of a) society, and, as a consequence, President Zelensky.

2 An attempt at the revenge of frankly pro-Russian forces in the Zelensky team is well understood. This time, the president had to speak to himself, the society would not accept the answers of auxiliary consultants, just to please 73% of the population would not have happened. The answer turned out to be exhaustive and unambiguous, the main thing is that it was possible to hook the ex-president Poroshenko, who "did not notice Putin's kum" for five years (which, incidentally, would not argue). How it worked, we'll see 21 in July.

3 The General Prosecutor's Office and the Security Service of Ukraine initiate a case about state change, the functionaries of the "NewsVan" TV channel are called for interrogation. After the cancellation of the teleconstruction, sociology appears promptly (thrown?), Which indicates a fall in the ranking of the "Servant of the People" party below the "psychological mark" in 40%. At the same time, according to the same sociology, the rating of the party of Medvedchuk is growing in line with the fall of the "Servants of the People". A picture of Putin's monopoly as "the only peacekeeper in the country" has been strengthened.

4 The "Servant of the People" Party is becoming increasingly "incomprehensible" for the part of 73% supported by Vladimir Zelensky. This applies both to patriotic and compromise with Russia of segments of society (a conditional division, but we understood each other). Some people do not understand the policy of opposing the aggressor at all or they see new threats of revenge (imagine a similar bridge bridge with Poroshenko impossible). Others do not see the result in reaching the promised world. It is difficult for people to understand the logic of the election campaign.

5 For the Russian audience, the picture "Kyiv and Zelensky against a dialogue between fraternal peoples" ("one people"), etc., is formed. The outburst of the threat of personal violence over the leading Channel NewsVan - to help.

6 The Kremlin tested the ground for a new format of communication under the new power configuration after July 21, clearly stating that "we will not miss you".

Points can be continued, but this is enough. We see a clear example of creating / maintaining a crisis using the same technology. The Kremlin acts as the main, if not the only, benfitzer of the incident. And it's completely unimportant whether Moscow will be able to preserve Georgy Gahariya as head of the Interior Ministry in Georgia (they say that the Kremlin does not agree strongly with his possible resignation), or to turn the Medvedchuk party into a future coalition in the Rada. The current tactics of Moscow are unbeatable precisely because it can always be satisfied with chaos as an intermediate result for itself. The tools, as we see, have plenty of it. Conclusions as to why in Georgia, through 11, and in Ukraine, through 5 years of occupation, such discourse and tools are possible and effective, follow. Although they are on the surface.

To be "half pregnant" in the issue of confrontation with the aggressor is not obtained from "dreamers" in Georgia, it will not work out and "servants of the people" in Ukraine. Hopefully the "Gabon" bridge bridge will help us understand this, although there were plenty of lessons before.

UPD: I have no reason to believe that the leading "Rustavi 2" Georgy Gabounia acted on a direct pointer from Moscow. This is not necessary - there are plenty of methods of lining. However, he clearly understood what reaction would be, at least in Georgia. To deny this is the same as believing that Malakhov and "Russia 24" really decided to "arrange a holiday of happiness" and just talk ...

And yes, the happy faces of the leading NewsVan with the slogans "We need to talk" - this is the bottom.

The impact of the Covid-19 pandemic on Kazakh-Chinese relations