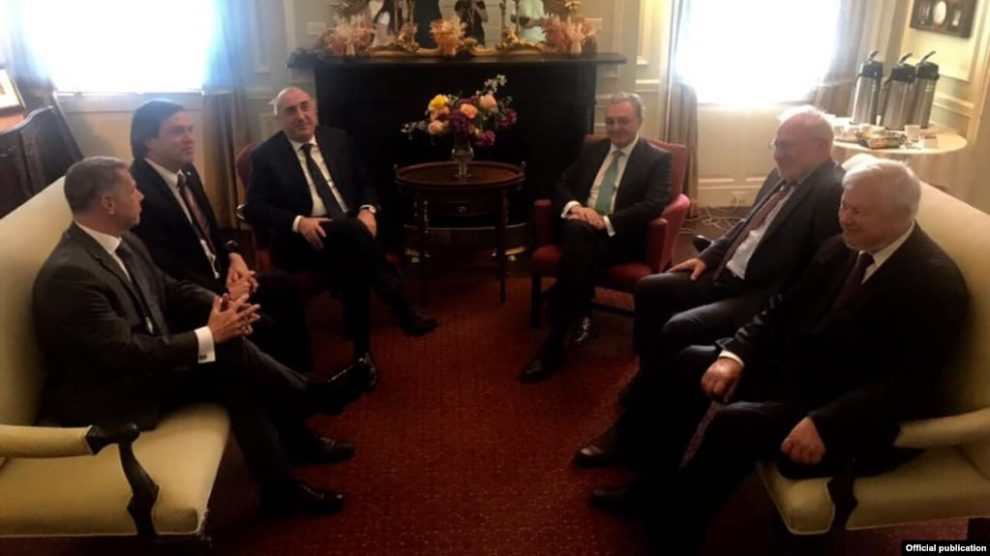 How would you rate the results of the meeting of the Azerbaijani and Armenian Foreign Ministers in Washington? What conclusions can you make from this meeting?

The actual meeting in Washington for a rather long period of time is in itself indicative. Before that, as was known, meetings of Elmar Mamedyarov and Zohrab Mnatsakanyan were held, for example, in Paris and Moscow. Any negotiations are important given the general tension and the ongoing ongoing war. Theses sounded. What is necessary to refrain from provocative actions, etc. This is important, as well as the willingness to continue such contacts. It is indicative that the parties agreed to hold a meeting in the near future under the auspices of the OSCE Minsk Group Co-Chairs. There is a feeling that a new communication channel is being set up, which is expected to create a favorable ground for the negotiation process as a whole.

Meetings at the level of the Foreign Ministers of both countries in Washington are extremely rare. Why did this meeting take place in Washington? Is there an attachment to the current exacerbation on the front?

The agreement on this meeting was reached earlier. Agreed that there will be meetings in Moscow, Paris, Washington. And truth, the last time a meeting in Washington was spent years ago 10 ago. In the United States, a different position than it was then, it can not but affect the work of the OSCE MG. The world has become practically unipolar. No matter how exaggerated it sounds, we understand that Russia is losing its meaning in view of the obscure policy pursued by the Kremlin. Washington is on the offensive. Small countries, incl. Armenia, already in case, asks for Washington, not Moscow.

According to many estimates, the South Caucasus is not included in the sphere of priority interests of the USA. Do you think the US is now starting to enter the conflict resolution process more actively?

There are such signs. American commentators openly write that Washington did not reach the Caucasus. You can understand the White House. We sit here and we think that the main world problem is the Nagorno-Karabakh conflict. But this is not so, to put it mildly. Among the priorities, the Armenian-Azerbaijani conflict has a definite meaning, but it is obviously not paramount. Washington understands that neither Azerbaijan nor Armenia will escape, they will not go anywhere with their conflict. Their turn will come, and the US will turn on.

... Washington organized a meeting, both parties were heard. Checking the clock until it's over. The positions of the parties do not change. This is still a good thing for everyone. If the Americans succeeded in influencing Yerevan - and Washington has certain capabilities in this sense, that's another question. The US is not yet ready to go for it. That's the point. Therefore, the talk that the parties are incongruous, so talk and remain.

But to Azerbaijan to give way? He lost his land in the war. Armenia should concede. When it comes to this, it turns out that Washington's attitude towards Armenia is by no means very different from that of Moscow.

Of course. If we compare it with this stage, then we have to admit it. But, I think, in a couple of years the same thing can be said about the current administration of the USA - again, in comparison ...

Nobody wants to notice that the Karabakh problem, the Armenian-Azerbaijani conflict has gradually shifted away from the central, main problems that are being addressed in Moscow, Paris, Washington, etc. He stopped sounding like it sounded a few years ago. This is a very dangerous political trend. Another five or ten years - and people will just get used to it, and they will not even remember - who is to blame, how everything started, etc.

How do you think the escalation of the Karabakh conflict is likely?

This option is possible. I do not exclude it completely. Azerbaijan has always fulfilled its promises, which can not be said about Armenia. Azerbaijan is the injured party. Baku reserves the right to resolve the issue by military means, responding to any provocations.

Negotiations on the Karabakh conflict are being held for over 20 years. It feels like all the co-chairs' efforts are aimed at preserving the status quo. Their main task is to hold back the war between Azerbaijan and Armenia. What then the meaning of these meetings, if there are no serious advances in the negotiation process?

The status quo clearly meets the interests of Armenia. The negotiators, in fact, care for Armenia, this is obvious. Armenia captures Nagorno-Karabakh. At the talks on Karabakh, this attitude is as if it were part of Armenia. Accordingly, it forces us to spend more power. But if we stop the negotiation process, this means we have to prepare for the war. This, I think, does not want either Azerbaijan or Armenia, which is all about. The West, however, demonstrates only the visibility of the desire to resolve the conflict.

Why are you so convinced?

Well, here's a politician now from the West. Russia has long ceased to be Soviet and looks like part of the periphery of the West. Moscow is now in such a situation that she absolutely does not need to climb to the peak due to "some sort of Azerbaijan" and do something contrary to Washington. There is a weakened Russia, which itself is hardly holding back from the collapse of the Kremlin ...