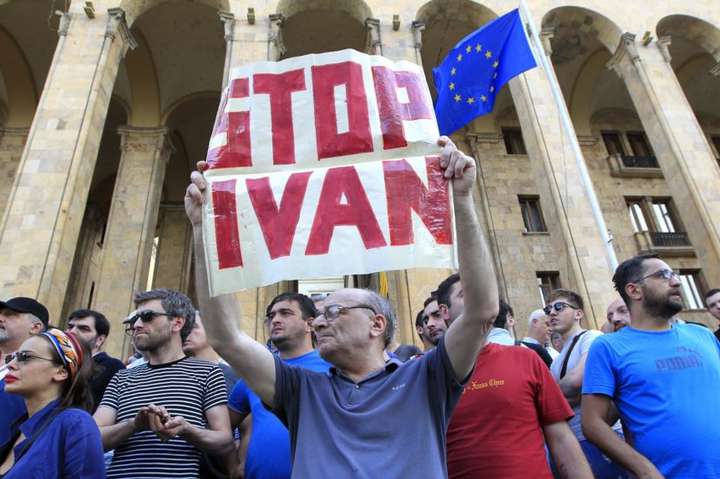 CIACAR-South Caucasus has spoken with Gela Vasadze, a political analyst at the Caucasus Institute for Strategic Studies (Tbilisi):

... When I am asked about counteraction to the hybrid threats of Russia in Georgia, I recall one story from medicine. When in one of the Soviet clinics doctors of one patient decided to urgently take out for treatment abroad. And when the doctor was asked "you think that we have such a poor level of medicine," he replied, "on the contrary, we have a very good level of medicine - so they will kill that you will not notice" ...

About the same situation we have with the counteraction of the hybrid war on the part of Russia. Very often it is necessary to hear about ignorance or misunderstanding of all depth of threats in Georgia. I will not agree here. Of course, human foolishness - the concept is infinite, but the main actors, in my opinion, understand everything perfectly.

To the aggressor we have with us since 2008 year in Georgia there is a concept that very clearly states: maximum openness to the citizens of the Russian Federation - maximum closeness and resistance to the authorities of the Kremlin. That is to say, personal cultural contacts in Georgia for Russian citizens are absolutely open, but as for political contacts - here is a stop, we have two problems - Abkhazia and the so-called South Ossetia, the Georgian territories occupied by the Russian Federation. Until these problems are resolved, it will be so simple because it can not be otherwise.

Due to the objective impossibility of liberating the territories by military means, such a formula - even under M. Saakashvili, and this formula was adopted precisely with him, and partly at first under the new power - looked quite labor. Russian tourists did not have Russian emigrants, and there are no problems with staying in Georgia. But over time, we saw from the Kremlin a systematic expansion of its political influence in Georgia through the use of various mechanisms, which today is called "soft power". Especially it became noticeable in the last one or two or two years.

Immediately I will make a reservation when they say that in Georgia today is the pro-Russian government, I do not agree with it. It's not like that. But, if they are told that we do not have agents of Russian influence, there are no people in power (or tied to power), which are tightly connected with Russia, it will again be false. They are definitely present, and there are serious groups - in power structures, political establishment, business, and so on. There are serious guys who have business interests in Russia, business interests here with Russian capital, and state capital that just works for Russia. They speak the words better, but do their job properly.

In parallel, agents of Russian influence work in the form of a number of local Georgian-language media, "freakish" NGOs, activists who make statements about the need for a compromise with Russia, that the West is so bad and it is necessary to agree with Moscow, advocate for Christian values ​​- in general , a standard set, very understandable for Ukrainians. Basically, these are marginal forces creating an image for the Russian media, but they are far from being in them.

It would seem that the above-mentioned win-win formula began to erode gradually. As a result, what happened in the Georgian parliament with the Orthodox Communist of the Russian State Duma was the result of the deliberate work of all groups of Russian influence. Despite the seeming incident of the incident and the seeming combination of a number of circumstances.

You see, he would not fire with Gavrilov - he would shoot somewhere else. The purposeful activity of various groups of influence has led to the fact that one part of the politics, the business environment, society has ceased to understand the depth of threats, the other part formed a hypertrophied sense of danger. That too, by the way, is harmful, as it is possible to see danger from everywhere - dispels and distracts attention from real threats.

It is logical that the Russian institutions of power, the Russian intelligence services conduct their purposeful work. But it is illogical that why our authorities did not lead and do not lead an effective policy of counteraction, do not conduct their game. As a result, we saw the apotheosis of the whole process after the incident with Gavrilov. The street reacted as she reacted - the spring had shrunk a long time ago. The Interior Ministry has applied unjustified force to the protesters. Two people lost their eyes, the situation surrounding the resignation of the Interior Minister came out of a strictly anti-Russian paradigm of confrontation.

For some, for some reason, surprised many, it would seem, the absolutely asymmetric nervous reaction of the Kremlin. But there is nothing strange here - they just protect their people. And this is not Gavrilov. It's about those with whom they have long been tied in Georgia - in power, politics, business, and so on. A shot at its own tourists is a signal to those (who) from whom decision-making in Georgia depends. Like, the guys we have on you also have the most different levers of pressure, and "we do not leave ourselves".

The current protest is another real chance for Georgia. The political palette after the 2020 parliamentary elections (or earlier) will be completely different. The next government will definitely be coalition. The government announced its readiness to abandon the majority (let it go with the "zero" barrier to parliament). This is a concession to the street, and the beginning of a new game. Everything just begins ...

Vilnius and Warsaw strengthen the defense of the Suwalk corridor

Georgy Mchedlishvili: “Today's Russia cannot be a companion in principle. Or about Georgia in global processes »