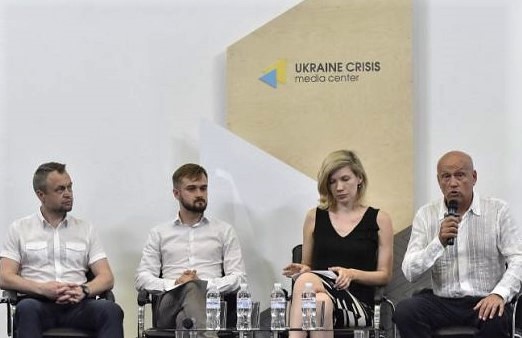 TsDAKR has joined the signatories of the State Defense Order Reform Declaration.

Mikhail Samus, deputy director of the Central Civil-Multinational Association for International Affairs, Mikhail Samus, who took part in the presentation of the Declaration, said that the CEDAW supports the efforts of civil society to reform the defense industry in Ukraine. Meanwhile, DOS reform is just one element of the necessary changes. According to M.Samusa, the defense industry of Ukraine needs systemic comprehensive reforms. "We are in favor of creating a central executive body that could assume the role of establishing equal rules of the game in the field of defense industry; protection of technologies and investments, regardless of whether the Ukrainian or American is an investor; creation of conditions for the concentration of budgetary and working capital for investments in science and technology ", - said M. Samus, in particular, and called on the public not to stop on the Declaration, because" if we just publish it without any practical action, nothing will change ".

"Throughout the world, in countries that fight, the level of closure of the state defense order is 10 or a maximum of 20%. For comparison, it is more than 90% of the information, in particular on public procurement (it is closed for public, parliamentary and even independent control). In the run up to parliamentary elections, power is fundamentally changing and it is very important that the process does not lose focus. NACO will continue to focus on the most important things in order not to allow corrupt schemes to thrive in a new era, "- said Oleg Rybachuk, a member of the Independent Anti-Corruption Committee on Defense and a co-founder of the NGO Center UA.

Elena Tregub, the general secretary of NACO, added:
"I hope this is the last year when we continue to talk about the need to declassify the state defense order. This reform has long overestimated. For the past 5 years, nothing has changed, because there was no political will. With the change of power, this will may have appeared. Declaration - a window of opportunity to present our work to those who make decisions in this area. "

The State Defense Order Reform Declaration was prepared by the Independent Anti-Corruption Defense Committee on the basis of the 6-monthly DOS study and corruption risks in this area. The purpose of the declaration is to draw the attention of civil society, expert environment, authorities and other politicians to the problems of the defense-industrial complex of Ukraine.

The declaration is singled out three basic recommendations on the implementation of DOS reform:

to increase the level of transparency of the state defense order by favoring open purchases and reducing the number of closed ones;

in cases where secret procurement is a necessity, to provide a competitive procedure (which existed until 2012 year but was abolished in the time of Yanukovych);

introduce free access for producers to the state defense order.

More information and video presentations of the Declaration here

The implementation of NATO standards does not undermine national defense tasks, the expert said