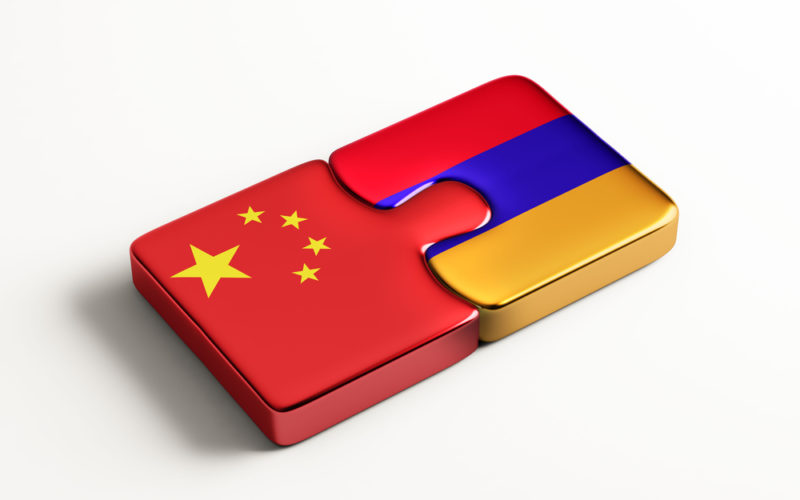 The first visit of Prime Minister of Armenia Nikol Pashinyan to Beijing in mid-May, followed by a visit two weeks later, the visit of the Chinese Foreign Minister to Yerevan in the framework of the regional visit gave a new impetus to Armenia's relations with China.

The prerequisites for such an impulse were created during the past years, and the revolutionary change of power in Yerevan and the restart of the foreign policy of Armenia in the new conditions created the conditions for an intensive dialogue aimed at realizing the common interests of both the short-term and the long-term plan.

The government of Nikolai Pashinyan was criticized for not being at the highest level at the international forum "One Belt - One Way" in the second half of April this year, which, according to China's Chairman Xi Jinping, signed an agreement amounting to more than 64 billion dollars Yerevan was represented by one of the ministers.

After that, it was stated that Armenia "lost nothing" because of this, and a three-day visit by Prime Minister N. Pashinyan to China (within the framework of the conference "Dialogue of Asian Civilizations") was held, which was held at the National Conference Center of Beijing. The conference was attended by the President of the People's Republic of China, the Presidents of Singapore, Sri Lanka, Greece and the King of Cambodia, as well as more 2000 delegates from the 47 countries of the world. During the visit of 14-16 in May, meetings with the chairman of China, the premier of the State Council, heads of large business took place.

It turned out that two visits - to Beijing and Yerevan - enough to reach an agreement on the mutual abolition of entry visasallowing visa-free travel by citizens of two countries up to 90 days for 180 days, which is fully in line with the civilized European approach. In addition, an extradition treaty was signed in Yerevan, as well as protocols on cooperation in the field of food security, opening up the Chinese market for Armenian agricultural products.

The parties, both in Beijing and Yerevan, made "far-reaching" statements emphasizing the mutual desire to develop cooperation in regional infrastructure projects. These projects can be part of the Chinese One Belt One Way Strategy and participation in the Silk Road Economic Belt Initiative, to which Armenia joined the 2015 year. It is worthwhile to speak of the commonalities of views on regional security, the commonality of approaches to global development on the basis of mutual respect and the principle of "unity in diversity".

Cultural-historical and educational aspect in Armenian-Chinese relations has traditionally been celebrated in the course of bilateral official contacts in the post-Soviet period and is considered an important basis for the development of relations. In particular, in X'NUMX, Yerevan, the Confucius Institute was opened in X'NUMX, where dozens of linguists are trained in Chinese and culture, last year a high school in the capital with in-depth study of the Chinese language was opened, and the University Center was opened in China in 2009. Armenology (Dalyan). This context was widely attended by N. Pashinyan in Beijing and Chinese Foreign Minister Wang Yi in Yerevan.

Speaking at the opening ceremony of the Dialogue of Asian Civilizations, Prime Minister Pashinyan noted: "Armenians in Armenia and the diaspora have historically followed such a world outlook, which implies openness to interact with different cultures, traditions and religions [...] This is the reason why today we can meet monuments of Armenian cultural heritage in Jerusalem and Istanbul, Tbilisi and Baku, Hong Kong and Calcutta, Singapore and Dhaka - in other words, in all major cities along the Great Silk Road. Thus, the ideology underlying today's conference is fully consistent with the values ​​we hold. ".

In turn, the chairman of China during a meeting with Armenian Prime Minister, speaking about Armenian-Chinese strong historical and cultural relations, added that they are, among other things, the result of the Silk Road. "We know the Armenian people well, we know the names of Aram Khachaturian, Artem Mikoyan, Hovhannes Tumanyan. We are united by the common goals of cooperation of civilizations. We are well aware of the significant historical events in Armenia. We are convinced that tragic events that have occurred with the Armenian people should be excluded in the future ", - said Si Jinping.

The economic aspect At present, taking into account the existing potential, is the main driving force in the development of Armenian-Chinese relations. At the same time, it should be noted that, due to objective and subjective reasons, Armenia's cooperation with China was more characteristic of "sluggish" development, which does not involve breakthroughs, and the role of "limiter" in this, unfortunately, belongs to the Armenian side due to the absence of relevant initiatives and political will.

With the change of power in Armenia, it became clear that without the implementation of large infrastructure projects of regional significance, Armenia simply has no way out of the emerging vicious economic paradigm built up in corruption logic and under the roof of various Russian interest groups. In addition, the logic of a new government, aimed at success and on economic development, also suggests that without projects of "breakthrough" nature, the task remains unpredictable. This provided an incentive for the Armenian side to express an interest in implementing joint programs under the "One Belt, One Way" initiative, that the Armenian side is considering the possibility of participating in joint programs in the areas of motor transport, railroad, information infrastructures.

Xi Jinping emphasized that China is ready to take part in the construction of the North-South highway connecting the Armenian-Georgian border with the Armenian-Iranian and the implementation of other infrastructure programs. In Yerevan, Chinese Foreign Minister Wang Yi also noted that China is interested in building the North-South highway, adding - "Taking into account the importance of the project as part of the" One Belt, One Way "initiative and in the context of ensuring regional development and stability".

According to the PRC chairman in Beijing, some Armenian goods have recently been successfully taking part in China's exhibitions and exhibitions in the local market. He expressed confidence in the development of cooperation in the fields of trade, industry, transport, culture and humanitarian cooperation. The PRC also added that his country "is ready to further promote such programs that will contribute to the development of Armenia and the well-being of the Armenian people."

In an official press release on the results of the meeting, Nikol Pashinyan-Si Jinping also said that "the interlocutors considered the prospective development of cooperation in the spheres of agriculture, transport, energy, information technology, infrastructure, education, etc. The parties agreed to discuss the steps of further cooperation at the level of the departments ", and in this regard, the visit of the Chinese Foreign Minister was the first and important step in this direction, taking into account the nature of the signed documents.

Political and military-political aspects in Armenian-Chinese relations, undoubtedly, are widely present, however, judging by positive signals in official communications, in many respects they "are meant a priori" and do not particularly indulge in publicity. During the meeting, the interlocutors touched upon the Nagorno-Karabakh conflict, it is expected to emphasize that the issue should be resolved through dialogue.

Concerning the internal processes in Armenia, in his speech in Beijing, Nikol Pashinyan spoke about revolutionary events, stressing the fight against corruption, free elections, political predictability and stability in the country.

At the same time, it should be noted that in Armenia, China is considered to be a potential supplier of weapons and military technology, and according to open sources, at present there are long-range missile launch systems of the Chinese industry - AR1A (300 mm) and WM -80 (273 mm). It is not a secret that Russia is very jealous of the possibilities of Armenian-Chinese military cooperation, and the testimony of this is a reaction to the visit of former Armenian Defense Minister Vigen Sargsyan to Beijing and his talks with Chinese representatives in September 2017 year. Russian State Agency "RIA Novosti" 7 September of the same year published an article under the heading "In China for arms: Armenia has become few Russian" Death ", which was then removed from the site, but was preserved in the Armenian press, in particular, in the publication "Aravot" (from 09.09.2017 year). Most likely, the Armenian side turned its intentions after the meetings, and the Russians thus "lifted objections".

It seems that at present, the sphere of economy is the priority in Armenian-Chinese relations, and the determining development should be expected in this direction.

Instead of a conclusion

Due to objective and subjective factors, Yerevan and Beijing's mutual aspiration to raise relations to a level corresponding to the understanding of the commonality of interests at the present stage and the potential stemming from the geographical position and human potential of Armenia and the political and economic power of China. And the current moment in the relationship can be characterized as complete readiness for a breakthrough.

At the same time, it is extremely important for Armenia that priorities in the relations of Yerevan with the European Union, Iran, the Asian giants, in particular with India and Japan, on many parameters complement and "complete" intentions in the Chinese direction. First of all, it should be noted that the EU financial assistance in Armenia mainly focuses on the same priority economic projects, in particular, the North-South highway, however, in its volume does not cover all needs.

On the other hand, given China's friendly relations with Iran in the context of the current large and still unsettled problems with Tehran and the economy, it can be expected that the intensification of the Armenian-Chinese relations will positively affect the dynamics of Armenia's relations with Iran in terms of the economy. In addition, the Iran-Armenia-Georgia road corridor, which connects the Persian Gulf with the Black Sea, has a strategically important beneficiary in China, not only in economic but also geopolitical terms.

Turkey's interest in China's internal affairs, which is predominantly propagandistic inward, is due to the Turkic origin of the Uighurs, a national-religious minority in northeastern China, which is extremely annoying and alarming to Beijing, and, in the light of this factor, makes its regional priorities in a new way .

And here it remains only to add one. The Chinese embassy in Armenia is currently occupying a small building in Bagramyan Avenue in Yerevan, however, the construction of a new embassy building complex on the outskirts of the capital is approaching completion, which is inferior to its size to the American one, at the same time, it is the largest Chinese embassy in the post-Soviet space. And in the political elites of China, as is well-known, it is customary to think not about the next elections, but about the next generations.

Ruben MEGRABYAN, Expert of the Armenian Institute for International Relations and Security, editor of the Russian-language version of "Aravot", Yerevan, Armenia

Gela Vasadze: “As Georgia goes to NATO. History and Modernity »

How to Legally Ensure the Development of Domestic Special Services