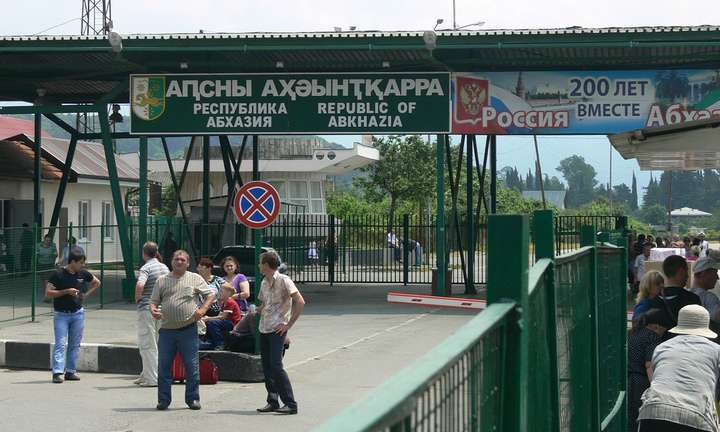 Recently, the Kremlin has started to distribute Russian passports in the occupied territory of the Donbas. At one time Georgia experienced such an experience in the occupied Abkhazia and the Tskhinvali region. CIACR-South Caucasus begins a series of interviews and comments on Tbilisi's experience in countering the "passport tool" of the Kremlin's hybrid war. Below is an interview with the professor of the Georgian Institute of Public Affairs Georgian Institute of Public Affairs, a political scientist Tornike Sharazenidze.

In your opinion, did it cost Kiev to initially consider as a precedent for itself the distribution of Russian passports in the occupied territories of Georgia and prepare for this?

Analogies between Georgia and Ukraine are certainly inquiring. And I do not think that for Kyiv this became such a surprise. Immediately make a reservation - I would not associate the launch of the process of "passporting" directly with the victory of Vladimir Zelensky in the presidential election. This decision has been prepared somewhere since the end of last year. And even for the Kremlin with its vertical power, the power to launch such a decision requires the passage of certain procedures. That is, we are not dealing with a spontaneous reaction or impromptu.

The motivation of Moscow in this regard lies on the surface. First, it is such a style, a demonstration of readiness and further talk from the standpoint of strength. And this is a signal not only for Kiev, but also for the West. I will repeat - here the surname of the new Ukrainian president is not important. Moscow just demonstrates that it has an instrument of hybrid warfare as "passporting" in its arsenal. Which successfully (successfully - in the coordinate system of the Kremlin) was tested at one time in Georgia. This is a threat, and a signal of readiness to raise rates on the "Ukrainian front" in the future.

Secondly, Moscow creates protection mechanisms for local militants in the occupied Donbas, primarily for those who are prosecuted and to whom the amnesty can not be applied in principle. These are the key points in my opinion.

Further, while conducting parallels between Georgia and Ukraine in the issue of "passporting", it is always necessary to remember that our confrontation with Moscow can not be compared to the forehead - there are differences both in the history of occurrence and in terms of scale or current contexts. For example, in Russia's financial plan it was not difficult to "digest" new Russian citizens, including pensioners from Abkhazia or so-called South Ossetia. Their number was not comparable with the current population of the occupied part of the Donbas. From here and the nuances you touch on the presence of "passports A / DNR" for the exchange, the need to change the residence permit for the Russian to receive a social package, pensions, and so on.

Therefore, this decision is still more symbolic than practical. It is pressure, creating new conditions for further negotiations and bargains, in order to get to the satisfying results. Russia will not return to Ukraine for the now occupied part of the Donbass on unsustainable conditions, and at any convenient moment it is ready to strengthen the option of distributing passports ...

What role did "certification" play at different stages of the creeping occupation of Abkhazia and the Tskhinvali region? What was the Kremlin pursuing in reality in the case of Georgia?

In the case of Georgia, I will highlight one indicative moment - the process of "certification" in the occupied territories of Georgia was launched before Mikhail Saakashvili came to power, before the "Rose Revolution". This happened at Eduard Shevardnadze, when Georgia as a state collapsed in fact, neither on any kind of course to NATO or the European Union, as well as the fundamental economic reforms, we did not speak at that time. There was no threat of Tbilisi's rapid drift to the West or hints of an economic miracle (both the first and the second were and are threats to the Kremlin).

But the decision on the distribution of passports was accepted. What does it say? The Kremlin, regardless of who in the head of Georgia, simply declared that speaking with us would be only from the standpoint of force - "forget about your own foreign policy", "there will not be more pleasures for you." A similar picture is now with Ukraine: "We are strong, and we will do what we consider to be necessary, and try to object to us." Here is a message to the West that "Ukraine is not a zone of our interests and it will not be different". Perhaps there is a bluff here. But in order to turn it into a bluff, much will depend on whether the new authorities will hold the pressure in Kiev.

The Kremlin's rationale for raising rates is understandable, as is the fact that Ukraine needs it entirely in its political orbit. But what is the role of the factor of "certification" played in the August war 2008?

I would not say that the distribution of Russian passports played a key role in this war. Russian propaganda, of course, overclocked messengers about the fact that "our Russian citizens", and so on. Formally, this occasion, of course, was present. However, in the end, they became more specific about the fact that Tbilisi in August of 2008 year allegedly started firing Russian peacekeepers. The focus was on peacekeepers.

Even the Tagliavini commission did not find that evidence, but Moscow continued and continues to focus on peacekeepers. And the "new Russian" citizens were the background. And here it is not necessary to look for linear logic in the actions of Moscow. It was just more convenient to speculate on peacekeepers. It would not work with peacekeepers, would strengthen the option of "Russian citizens". It would not work out with them - would have thought up something else. In Ukraine, this should be well understood.

"Passporting", of course, became an integral part of the process of separation of territories from Georgia. Hardly a key, but one of many. This also applies to the further recognition of the "independence" of Abkhazia and the so-called South Ossetia and possible subsequent annexation of these territories (the latter is relevant, above all, for the region of Tskhinvali).

How did Tbilisi fight against "passporting" in the general context of the policy of de-occupation of territories? What would you have identified as the right steps, mistakes ...?

First, Tbilisi tried to create parallel administrative structures in the territories of Abkhazia and the Tskhinvali region. I remind you that before the war of 2008, we controlled the Kodori Gorge (which is around 25% of the Abkhaz territory), in the so-called South Ossetia was controlled by Akhalgori and Georgian villages around Tskhinvali. (All this was lost after the 2008 war of the year) Georgian institutions of government worked there. The emphasis was on the socio-cultural sphere. Various cultural and mass events were organized and so on. Serious attempts were made to make the difference between the Abkhaz and Ossetians in the occupied territories with Georgia. By the way, it was precisely this moment that one of the reasons why considerable funds were allocated for the development and development of the Adjara capital Batumi. A signal was sent to the neighboring Abkhazia - "Just compare Batumi and Sukhumi". These are positive moments, which, however, did not work. For the most part, because all the processes in the occupied territories were controlled by Moscow. The Kremlin then decided everything for itself.

But there were serious omissions on the part of Tbilisi. Military bases, military hospitals were built on the administrative borders with Abkhazia and the region of Tskhinvali - in Zugdidi, Senaki, Gori. This was negatively perceived by the population of the occupied territories (I emphasize, it is a question of a period up to 2008 year). In parallel, clips, videos of a militant character were shot. "Heroes of Georgia, you will soon be drinking water from the Psou River" (the river will separate Georgia from Abkhazia with Russia) and so on. Such informational psychological treatment exacerbated the effects of cultural and social events.

The armed forces, like the entire defense sector, could and should have been developed, but without this militant rhetoric. Only the local population could scare the war. But how could this work, if there were already regular Russian troops in Abkhazia, and Russian peacekeepers in the Tskhinvali region, which, in essence, was one and the same. In general, the bet on self-esteem did not justify itself.

Plus, in my opinion, nobody seriously considered economic expansion in Abkhazia and the Tskhinvali region. Moreover, in Georgia, in the first cadence of President Saakashvili, there was a real economic breakthrough. It is clear that opportunities due to the presence of Russia were limited. But it was possible, for example, to build on the line of administrative boundaries, to say the least, in Gori, at least a banal market, and to attract residents from the occupied part of the territories. Especially since then before the war of August 2008 year there were no problems with the movement. Even such trivial things were not made. The economic moment was lost. The bet was made on spectacles, and the bread was forgotten ...

How is today affected by the distribution of passports to the current policy of reintegration of territories over 10 years after the war? 08.08.08?

The Georgian state - and it should be emphasized - has done and continues to do much for the Abkhazians and Ossetians from the occupied territories. In terms of social support, educational health programs and so on. Regardless of passport schedules. There are no limitations. The visitors coming from there seem to feel the difference. The same medicine in the occupied territories today is a complete catastrophe.

But at the same time, this does not work today in terms of approaching the return of territories.

Further evident to Georgia is the threat of some reconciliation of the population with the loss of territories. A whole generation is growing that does not perceive the restoration of state integrity as a key priority for itself. Nobody puts it in doubt, but also to pay a high price for it is not ready. Against the backdrop of profound economic problems, active youth is guided by a better life, aspiring to emigrate to Europe. Here is a situation similar to us with you, albeit different in scope.

Today, in my opinion, the main challenges for Ukraine is the next period of fragmentation of the country and corruption, no matter how banal it sounds. Hence the problems for the economy and the nutrient environment for Moscow in terms of destabilizing the situation within Ukraine. Russia does not do anything new in its history. Its foreign policy towards its neighbors does not change for centuries and is carried out by many times tested scheme ...

Interviewed Vladimir Kopchak Head of the South Caucasus Branch of the Center for the Study of Army, Conversion and Disarmament, Tbilisi

Defense plan of Ukraine: In the area of ​​special attention

Putin's Atomic Joker. The Kremlin is planting Europe on a new energy needle