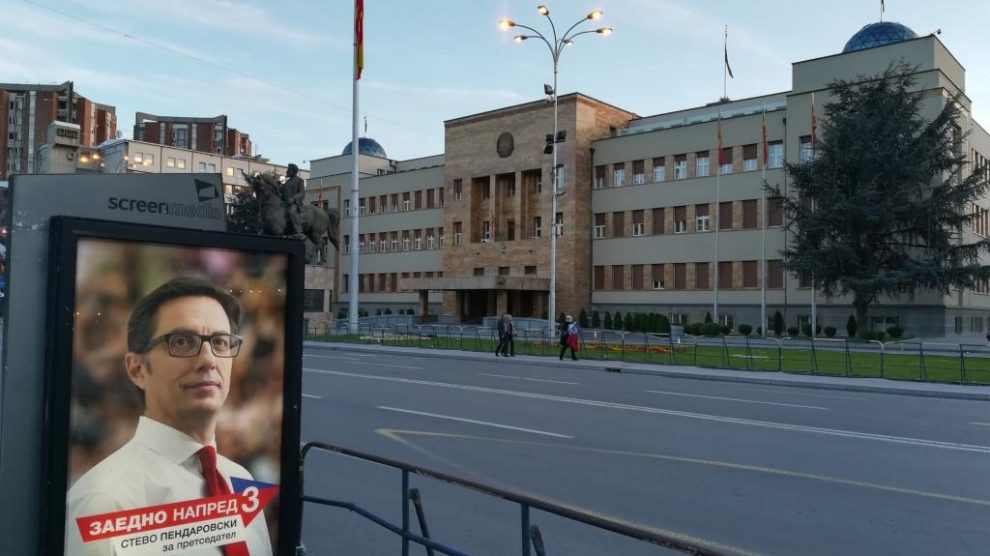 On Sunday, 5 May in the Republic of Northern Macedonia (RPM) will host the second round of presidential elections. His main intrigue, despite the small gap between the two leaders, will be not so much who will become the president, but whether he will be elected at all. The reason is that the Macedonian voters may have a low activity, which may lead to the second round being recognized as not occurring.

According to the results of the first round, the greatest support of voters, namely: 42,84% (322605 votes) was received by Steve Penderovsky, supported by the ruling Macedonian Social Democratic Union (SDSM) and their coalition partner, the largest Albanian party in the country, the Democratic Union for integration "(DII). Following him, Gordana Siljanovska, who was supported by the main opposition force in the country, "The Inner Macedonian Revolutionary Organization - Democratic Party of Macedonian National Unity" (VMRO-DPMNE), has been lagging behind. For her, 42,24% of voters cast votes (318247 votes). The third result is 10,57% of voters (79 677 votes), a representative of the Albanian ethnic group, Blerem River, who was supported by the Albanian Movement of the Besa and the Alliance for Albanians.

On the eve of the election, sociological surveys showed that none of the candidates would be able to receive 50% of voters support and accordingly become president in the first round. Therefore, the fact that there will be a second round, for no one became a surprise. Also, the data of social surveys accurately showed in which sequence the candidates will pass the first round. The only thing that they could not foresee is the difference between the leader of the presidential race, the pro-government Pendarovsky and his rival from the opposition Siljanovsky. The main reason for the fact that they finished with a gap of less than 0,5% and not nearly 4% as polls showed was the low turnout of voters. So, participation in the first round took only 41,78% (743267 citizens) of all those who registered for voting (1808131 citizens), which is the lowest index among all presidential campaigns in the country.

Causes of passivity of voters

From the passivity of citizens affected both leaders. The general reason for the low turnout was the disappointment of the majority of the country's population with the local political elite, with both the fact that both the authorities and the opposition. Some believe that for the last two years, the reign of SDSM and SII in the country has changed little. Probably the country's membership in NATO is not considered by them as a major achievement of the government, as the living standards in the country remain rather low. Wages, at a relatively high standard of living, still remain one of the lowest in Europe. Similar mood is also among the supporters of the opposition VRO-DPMNE, almost 15 years in power of which (up to 2017 р.), Can hardly be called successful. Along with this, part of the VMRO-DPMNU electorate supported the boycott of elections through an agreement with Greece to change the name of the country, which they consider treason.

In addition, both candidates had their own separate reasons for the lack of voters' votes. Thus, the lowest turnout in the elections was in the regions inhabited mainly by the Albanians, which are considered the electoral field of the DSI and which was calculated by Steve Pendarovsky. Other Albanian voices, which the pro-government candidate counted on, was given to the ethnic Albanian Blerem Reti.

Gordana Siljanovskaya, although following the position of her supporting MPGMD, criticizing the Macedonian-Greek agreement and in general the activities of the acting government Zoran Zayev, for a number of members of this political force, as well as some of its electorate, remains a strange candidate. They do not perceive it as a true right-wing policy, since in the 90-ies it was a member of the Liberal Party of Macedonia, as well as the minister of government formed by the SDDS.

The threshold in 40% and the Albanian electorate

In view of the above, the main task before Steve Pendarovsky and Gordana Silyanovskaya is to mobilize the electorate in order to get the maximum turnout on election day. At the same time, they need it not only for victory, but also for the second round in general to be recognized as such.

The fact is that, according to the Macedonian electoral law, the results of the second round are recognized if at least 40% of registered voters participated in it. Otherwise, the results are invalidated and new elections are appointed. The turnout in the first round at the level of 41%, as well as the fact that Macedonian voters are traditionally less active in the second round, suggests that such a scenario is quite real. In order to avoid it, both the candidates and the politicians who support them should further motivate their voters to come to the polls on Sunday. As the results of the first round show, this will be a daunting task.

It will be important for the 40% + voters to take part in the second round to have their ethnic Albanians behave: the DSi electorate, which in the first round actually boycotted the election and those who voted for the Blaremay River. That is, will they come to polling stations, or stay at home?

If they decide to boycott the election, then without their votes, crossing the threshold in 40% will be difficult enough. Accordingly, there may be re-election in the country. If they choose to vote, they are likely to give their votes to the pro-government Steve Penderovsky, who in his election campaign emphasizes the importance of the Macedonian-Greek agreement and the integration of Macedonia into the EU and NATO, supported by the majority of Albanians, and openly supports the recent enlarged the rights of the Albanian language in the country.

For Gordan Silanovsky, the task of working on the Albanian electoral field looks much more complicated. Despite the fact that it is popular among the Macedonian population, its ranking among ethnic Albanians is low. Last but not least, it is supported by the VMRO-DPMNE, which the majority of the Albanian population "mildly" does not like. And given the number of voters among ethnic Albanians in the country, their activity in the second round does not promise anything good for Gordan Sil'yanovskaya.

So, in fact, the voter's activity, in particular from her Albanian part, depends on whether the country will receive a new president on Sunday or a regular election campaign with all its consequences. Given the fact that the RPM is at the stage of getting NATO membership, as well as no less important negotiations for its accession to the European Union, the country needs political stability and focus on these processes rather than another struggle for the sympathy of voters.