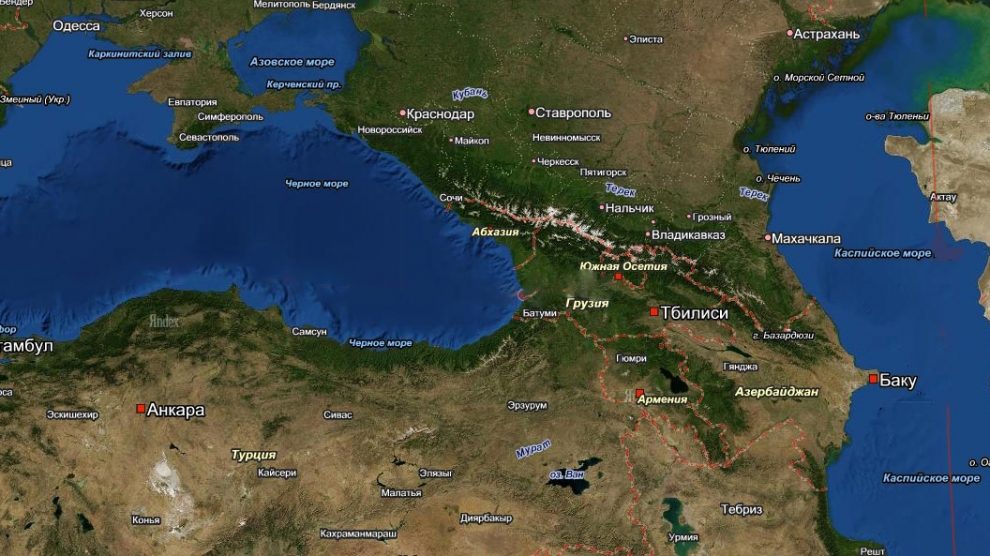 While Russia and China are trying to maintain / expand their access to the European market through international transport corridors, the West in the face of the United States and the EU are looking for different ways and encouraging the development of new projects in order to get even closer to the South Caucasus and Central Asia.

The first project is the Lazurit Transport Corridor, which links Afghanistan with the countries of the Caspian Basin and Turkey. The second is the international transport corridor "Caspian Sea - Black Sea" (MTP-KM-MM).

In this article we will discuss in detail the second project, which became the subject of hot discussions in the expert community of the CIS and the West.

At the beginning of March in Bucharest, the Foreign Ministers of four countries of the Caspian-Black Sea region - Turkmenistan, Azerbaijan, Georgia and Romania - met. The main subject of negotiations is the drafting of the international transport corridor "Caspian Sea - Black Sea". The main lobbyists of the creation of a transport corridor between the Black and Caspian Seas are Romania and Turkmenistan. The parties have already taken steps to launch the project, but no particular success has been achieved in this matter.

What circumstances influenced the need to implement this project only now? The first factor, it seems to me, is the adoption in October of the 2018 by the European Union of a strategy for the interaction between Europe and Asia. I would remind you that EU Commissioner for Transport Violeta Bulz said: "Transport infrastructure is a blood-based system of interaction between the EU and Asia, transporting people and goods between continents, on the wings of digital technologies and decarbonising. Europe shares its expertise and participates in one of the most advanced transport networks and infrastructure financing programs in the world: the Trans-European Transport Network. Interaction matters. "

The strategy says that the EU will participate in the creation of transport links, energy and digital networks. The second factor is the socio-economic crisis in Turkmenistan. Turkmenistan, the economy of which is experiencing far not the best times, is keenly interested in diversifying its economy and reducing its dependence on exports of natural gas through the development of transport and communication potential.

In recent years, Turkmenistan has invested heavily in upgrading its port infrastructure. In May, 2018 year in Turkmenbashi was put into operation an international seaport built by the Turks. Investments in the project amounted to more than 1,5 billion dollars. It is clear that the production capacity of the Turkmen port has grown several times, for this reason, Ashgabat wants to switch to its port a part of the cargo that is shipped from China and Russia to Europe within the framework of the "One Belt, One Way" initiative. Turkmenistan has never been more interested in delivering reduced natural gas (LNG) to the European market. LNG transportation can be carried out in special containers from Turkmenbashi to Baku, then by rail - to Batumi or Poti, and from there by sea - to Constanta.

The third factor - does not add to the optimism of the situation with the economy of Romania. The rising unemployment rate, Romanian migration, the overwhelming majority of which have gone to Italy, Spain, Great Britain and Germany. They send money home and help the economy. In ten years Romania has received from the EU as financial aid more than 40,5 billion euros, and on a non-refundable basis. And the minimum wage still remains one of the lowest in the EU - 275 euro. To solve all these problems, Bucharest wants to raise its economy level. Today he got such a chance - Romania, using for this purpose its chairmanship in the EU in the first half of the 2019 year, expects to receive big revenues from the launch of the KM-MM transport corridor.

Now it remains to understand the main issues - how exactly and to what extent to send the goods on this route, so that it is in the interests of all project participants? Profitability and profitability are the main components of international trade. To solve these problems, the Quartet members have already planned to set up an expert working group that will deal with tariff regulation, determination of remaining infrastructure and legal constraints, etc. But here there is another nuance, which exactly loads of the member countries expect to carry along this route? In the role of large shippers could speak, for example, China and India, which part of their goods can be delivered to Europe through this route.

The following questions are asked. How do these countries get involved in the project? How much does the Chinese and the Indians appeal to this route?

Let's start with China. Frankly speaking, it is not entirely clear to me that it can force Beijing to refuse more profitable and short routes through the Trans-Siberian or through Kazakhstan. The international transport corridor "KM-MM" is not in force with them in terms of terms and cost of transportation, but there are no other reasons. Recall that Baku-Tbilisi-Kars railway (BTK) railway was launched at the end of October 2017. The route works, but the Azerbaijani side wants China to join this project. Negotiations are under way in this direction, but persuading the Chinese is still not possible. Work on the supply of goods to Europe from China is completely debugged. Moreover, in March of this year, Chinese President Xi Jinping traveled to Rome, where a memorandum of cooperation with the Italians was signed in the framework of the project "One Belt, One Way". Beijing is interested in modernizing the Italian ports - Genoa and Trieste. China is ready to invest in this project in order to increase its cargo turnover. And I doubt that after this important deal with the Italians, China will turn its attention to Romania and the project "KM-MM" lobbied by it and Turkmenistan, because the American warships often visit the Romanian port of Constanţa. Will China be so risky? Not sure ...

As for India, today New Delhi is interested in developing the North-South international transport corridor. Representatives from three countries - Russia, India and Iran - signed a cooperation agreement in order to expedite the organization of the North-South corridor, which will pass from Russia to India through Tehran. So, this corridor will give India the opportunity to send its goods to the markets of the Nordic countries. Moreover, New Delhi makes a big bet on this project. India has allocated up to 500 millions of dollars for the development of the Iranian port of Chabahar, as well as related roads and rail lines. In addition, talks with India on the free trade zone are currently in full swing, as the North-South transport corridor will only come to fruition if the trade barriers between India and the countries of the Eurasian Union are eliminated. Will the Hindus refuse this project for the "KM-MM" project? I doubt very much ...

As for Russia, the implementation of the Caspian Sea - Black Sea transport corridor will certainly not be in the favor of the Kremlin, if Turkmen gas goes to Europe via this route. Especially since the legal status of the Caspian Sea has already been determined. In addition, the United States has gently pushed Ashgabat in this matter recently. Suffice it to recall the recent congratulation of US President Donald Trump to his colleague Gurbanguly Berdymukhamedov with Novruz holiday. "I hope that Turkmenistan will be able to take advantage of the new possibilities of exporting gas to the West in connection with the recent definition of the legal status of the Caspian Sea," the congratulatory message says. But also in Russia do not dormant. Alexei Miller, the head of the Russian company Gazprom, visited Turkmenistan three times in the last few months. Miller's previous visits to Turkmenistan took place in October and November 2018 year. During his trips, he met, among other things, President Berdymukhamedov. It was announced that the parties were negotiating a resumption of supplies of Turkmen gas to Russia, which had been interrupted several years earlier. Judging by frequent visits by Miller to Ashgabat, there is a high probability of resuming supplies of Turkmen gas to Russia.

But there is another factor that pushes me to this conclusion. The fact is that the only buyer of Turkmen gas remains China. Previously, Iran bought Turkmen gas. But scandals often took place between countries. In January 2017 of the year Turkmenistan demanded that Iran repay its debts and shut the supply. In response, Iran completely refused to purchase. Now Russia is trying to fill the resulting gas vacuum. But even in the event of the resumption of supplies of Turkmen gas to Russia, Turkmenistan will not refuse the KM-MM project.

As for the countries of Europe, Ukraine has a definite prospect of joining the KM-MM project with its developed port system. These prospects depend heavily on the military-political situation, the cessation of hostilities in the east, which is not yet seen. It's too early to translate the question to the practical plane - the initiative must come from here, including from Kiev.

Summing up the above, I note that the transport corridor "KM-MM" is a real project that can benefit its participants. But for its profitable work "for a long time" attraction of China and / or India is the basic condition ....

Personnel sensitivity of the security sector

Dmitry Kiva: "Worst of all, if the new leadership of the country is deceived by the remnants of the old team at GP Antonov"