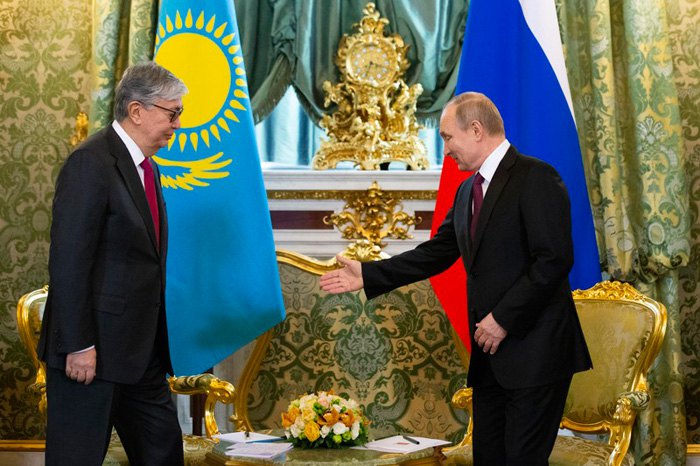 Recently, the official visit of the new Kazakh President Kasym-Zhomart Tokayev to Russia ended, where he met with Russian President Vladimir Putin. The peculiarity and significance of this event is that it was the first foreign trip of a new Kazakhstani leader, which was to demonstrate the unchangeability of the country's foreign policy priorities after the departure of Nursultan Nazarbayev from power.

The announcement, unexpectedly announced two weeks ago that the permanent president of Kazakhstan, Nursultan Abashevich Nazarbayev, left his post and temporarily transferred power to the chairman of the Senate of Parliament, Kasym-Zhomart Tokayev, was literally a hurricane not only in Kazakhstan and Central Asia, but in practically all the world's mass media. Despite his departure, Nazarbayev remained in the hands of the authorities in the system of the state apparatus as the First President, the leader of the nation (Elbasy), the Chairman of the Security Council and the leader of the ruling Nur Otan Party.

However, the main thing, first of all, in the capitals of the neighboring countries, was the question of how Tokajev will behave as president, whether he will be a full-fledged leader or will be a "hands-on" president, whether he will go to elections in 2020, and how foreign policy will be built country Of course Kremlin is of greatest interest here - Kazakhstan is a strategic partner of Russia and a member of all Russian international organizations and blocs (CIS, UAE, CSTO). Therefore, the possible radical movements of the Nur-Sultan (new name of Astana) from the Russian fairway will be a catastrophe for Moscow.

On the other hand, China, which claims to be a champion in the list of foreign policy priorities of the Nur-Sultan, at least in economic terms. Kazakhstan is a river of Chinese investments and loans, namely Kazakhstan is a "window" for the Chinese initiative "One belt, one way", and the loss of such a partner due to the transfer of power in Kazakhstan - would be the failure of all the foreign policy concepts of China: from the "Belt and Ways "to the" community of common fate ". Too much has been invested, and to lose all this - not in the hands of Beijing, and personally to the Head of the People's Republic of China, Xi Jinping. Therefore, the struggle for the location of a new president (as well as local elites) in Kazakhstan is now a key issue for Russian and Chinese diplomacy (and also special services).

The oil was flooded with information that Kasym-Zhomart Tokayev is a professional Chinese woman, fluent in Chinese, and, according to unofficial information, is a supporter of intensifying cooperation with China. So it is or not, it is difficult to say: Russian (as well as English) he owns not worse, but a wealth of experience in diplomatic work (including the post of Deputy Secretary General of the United Nations and the Minister of Foreign Affairs of the country), does not allow to openly express their foreign policy preferences.

In addition, Kazakhstan has a Foreign Policy Concept for the 2020 of the Year, which clearly states that Russia is the main partner, and China is already behind it. Therefore, it is not worthwhile to expect from the professional diplomat and state official the careless words about foreign policy preferences. Especially since Russia really occupies a key position in the foreign policy of Kazakhstan: in all areas (politics, economy, security, culture), Moscow firmly consolidated this country with it. And the first foreign trip of the second president was indicative - in Russia.

The purpose of the visit is to check the clock with the Kremlin. At least for now

Tokayev's voyage to Moscow, at first glance, did not differ somewhat supernaturally: as always, protocol words about friendship, partnership, mutual understanding "forever-eternal", several signed contracts (along the Baikonur Cosmodrome, Bayterek space rocket complex and the production of tractors) , exchange of views on the political situation in the region, the world, etc. However, the main goal of the visit was a demonstration that there will be no "swings" in the country's foreign policy, everything will remain in the same format as Nursultan Nazarbayev created, Kazakhstan is near and the Kremlin has nothing to worry about.

This step also pursues a very important internal political task - at the moment in Kazakhstan, the so-called transit of power has taken over in the active phase. At the first stage (before the December 2020 elections), Kasym-Zhomart Tokayev will perform the duties of the president. On the second, after Nazarbayev's final approval of the candidate's candidacy, the president will be elected to power, and it is possible that the current head of the country may become the president.

However, Nazarbayev retains a lifetime right to interfere in the work of state authorities on the rights of the leader of the nation and the first president of Kazakhstan - Elbasy. Therefore, at the stage of transit and strengthening the new system of government in the format of the tandem, "Nazarbayev-Tokayev", the attempt of Russian intervention is the latest thing that would be expected in Accord (the administration of the President of Kazakhstan).

On the other hand, the accents made by Tokayev during the meeting with Putin are also interesting. The Russian president focused on bilateral issues to "strengthen relations for the benefit of fraternal peoples of the two countries." And Tokayev, in addition, pointed to the principles of multi-vector diplomacy, saying about Kazakhstan's importance to other countries: in the aspect of transit potential on the axis "Western Europe-China", as well as in the transportation of oil to other countries. Thus he made it clear that Russia is not the only country on the list of partners, there is also China, Europe, etc.

Kazakhstan's experts confirm this: "Tokayev tried to demonstrate the complete continuity of the foreign policy course and the correspondence of his earlier adopted concept of multi-vector diplomacy, in which Russia remains the main partner, and China will be the second most important partner. However, Kazakhstan will be in a constructive relationship with Washington and Brussels, and will not allow itself to be drawn into a confrontation between the RF and the West. "

This thesis is encouraging for Ukraine: Kazakhstan, although it is voting against the Ukrainian resolutions on Russian aggression and Crimea in the United Nations, but does not recognize the Crimea as Russian. In order to build normal relations with the EU and the US, Kazakhstan should demonstrate respect for international law, including on the Crimea - a "red line" for Nur-Sultan. Will the foreign policy vector Chords move toward Beijing, let's look after the elections of 2020 of the year - especially since the Concept of foreign policy of the country operates also up to 2020 year.

The Macedonian U-turn: From European Integration to Early Elections

Gela Vasadze: "Letters of Happiness for Dreams or Why US Care for Democracy in Georgia"

Alisher Ilhamov: Challenges and Risks Related to Uzbekistan's Possible Accession to the EAEU