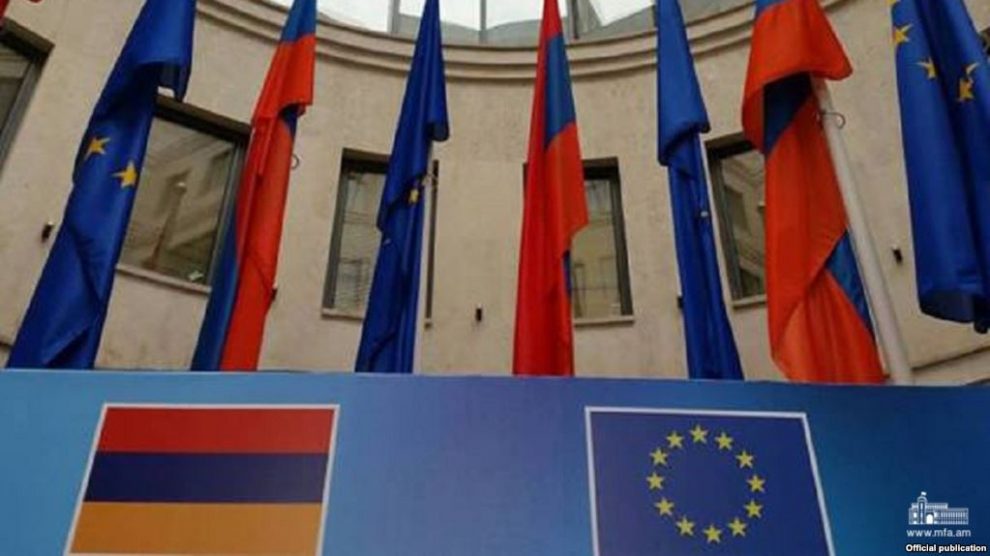 At the beginning of March, Armenia-EU relations received a new impetus with the working visit of Prime Minister of Armenia Nikol Pashinyan to Brussels, during which he met with the leaders of the European Union.

This is his second visit to Brussels after a successful February official visit to Berlin and meetings with the German leadership. The first visit to Brussels took place in July last year to participate in the NATO Summit, during which he met with EU leaders, and recalled Pashinyan's reproach to Brussels in response to a proposal to extend Armenia's financial assistance when he said that such he "can easily shake the pair of corrupt officials", and he does not expect it from Brussels.

Nevertheless, it is worth recalling that there was a certain inertia of perception that was overcome at that time, and, according to the head of the EU Delegation in Yerevan, Ambassador Petr Svitalsky, in Armenia there finally appeared a government that knows what it wants in relations with Europe

In November 2017, Armenia concluded a new agreement with the European Union on a Comprehensive and Enhanced Partnership with the European Union (CEPA) covering all spheres of socio-political and economic life, however, due to the dramatic events that led to the change of power in April 2018g, as well as the change of paradigm in relations with foreign policy partners, in the first months after the Velvet Revolution, a situation was created that observers were partly fairly characterized as a "crisis of perception." The picture was supplemented by the "sediment" left since September 2013, when the president of Armenia suddenly decided to abandon the Association Agreement with the EU and lead the country "Eurasian" course after nearly four years of successful negotiation process with Brussels. The flow of disinformation in a number of Armenian and Russian mass-media in connection with foreign-policy intentions of the new Armenian government was added to this.

It was obvious that after the "first pancake" came out during the July 2018 visit, when the meetings were more informative and were "on the legs", a new working visit was prepared carefully. Meetings were held not only with the heads of the European Commission structures, but also an open political presentation and discussion at the Committee on Foreign Relations of the European Parliament.

In his speech to the European parliamentarians, PM Pashinyan placed the main emphasis on a democratic agenda, firstly, saying that democracy in Armenia has no alternative, because "the ideas of freedom and democracy have deep roots in the basic values ​​of our people. Armenia was one of the first countries where, at the end of the 1980, a national movement against the former communist regime began. The restoration of our independence in 1991 year, undoubtedly, was aimed at the formation of a society based on constitutional democracy, the rule of law and liberal values. In the last 20 years, democracy in our country has been distorted, knocking us down from the previously chosen democratic path. It was the result of a misleading interpretation of our traditional values ​​and aspirations. " Secondly, he stressed that the process of democratic transformations "rests on the will and aspirations of our people. Moreover, he is in no way connected with external forces. This process has not caused any tectonic changes in our foreign policy, nor any changes in our foreign policy strategy. Armenia remains committed to its foreign policy obligations and faithful to its partners. " Thirdly, he stated that democracy for Armenia is not just an option of existence, but also a security issue. "We believe that it is right for our people and our political culture to recognize that democracy provides stronger and more efficient economic and political institutions, which are an important prerequisite for the development of the country. Consequently, we reject the luxury of possessing underdeveloped state institutions as it was before. They have led to economic inefficiency, hampering the progress of our country. Democracy, which stimulates economic and political institutions in Armenia, has become imperative. Today we have no alternative, "Pashinyan said.

Approximation based on mutual interests

The theses voiced by the prime minister correspond to the expectations of the Armenian society. According to a survey by the Analytical Center for Globalization and Regional Cooperation (Armenia), about 87% of the 800 respondents in four Armenian cities believe that the new authorities should deepen relations with the European Union.

On the other hand, internal changes in Armenia, including steps to clarify the circumstances and the perpetrators of deaths during the March 2008 events of the year and bringing the perpetrators to justice, have given rise to a positive response in another European structure - the Council of Europe, in particular, in the report of the Commissioner on human rights of SE Dunya Mijatovic, published in late January on the results of her autumn visit to Armenia.

In European structures and capitals, the opinion is formed that the new government of Armenia is really motivated in the reform of all spheres, however, the main work is still ahead. And in this regard, Armenia's close cooperation with European structures in the reform process is very important in terms of ensuring the proper quality, irreversibility of reforms, minimizing risks and, also importantly, the possibility of financial and consulting assistance from the EU, the CE, and the specialized structures for Armenia will have decisive.

Clarification of expectations and positions

During a joint press conference, Prime Minister Nicolas Pashinyan and Donald Tusk, European Council chairman, outlined Brussels's talks on their expectations and positions. In particular, after talks, during which a wide range of issues was discussed, from democratic reforms in Armenia to regional and international developments, N. Pashinyan stated that "the dynamic political changes that have taken place in our country, as well as democratic elections, are even more brought Armenia closer to the European Union in terms of commonality of values ​​", that" Armenia is more resolute and has a political will to deepen its cooperation with the European Union, and that "New Armenia is ready to make lasting auspices Ia, Suggest New ideas and initiatives, napravlennыe on the extension of cooperation with Evropeyskym Union member states and the EU. I am glad that our European friends and colleagues have such an approach and vision in the context of our bilateral agenda. "

"The EU will continue to support Armenia in the process of building a more consolidated democracy and creating a better economic future for its citizens. We are determined to implement the promise of a comprehensive and expanded partnership agreement that will benefit both Armenia and the European Union. The prevailing part of the agreement is already being applied and has a real impact. The EU is the largest export partner of Armenia, accounting for more than 28% of Armenia's exports. This agreement is implemented in parallel with internal reforms. The EU is ready to continue to support these reforms through broad technical and financial assistance. We agree with your decisive emphasis on combating corruption and affirming the rule of law ", - D.Tusk stated in his turn.

In Brussels, Brussels decided in the coming years that the European Union and the World Bank will provide around 13 billion euros for a number of large-scale infrastructure projects in six countries participating in the Eastern Partnership program. Within this program, more than 700 million euros will be provided to Armenia. Most of Armenia's priority programs, according to the EU document, concern the North-South transport corridor. In particular, for the construction of the Artashat-Agarak section of the North-South highway (to the border of Iran), 450 million euro will be allocated. For the reconstruction of the Gyumri-Bavar section (to the border of Georgia), the same highway will be allocated 41 million euros, another 7,5 million euro will be allocated for repair of the Yerevan-Vanadzor highway. In addition, the EU and the World Bank plan to allocate around 15 million euros for the modernization of the Meghri border point on the Armenian-Iranian border.

At present, at the level of the Government and ministries, as well as the inter-departmental commission set up for the implementation of CEPA, joint programs are being worked out on other spheres - IT, education, culture, assistance to small and medium-sized businesses, regional assistance, ecology, etc., which the EU is ready to finance.

A separate "track" discussed Nagorno-Karabakh conflict and regional security issues. The head of the European Council during a joint press conference, in particular, stated: "As you know, the EU fully supports the Minsk Group co-chairs and their proposals. I am inspired by the recent contacts between the leaders of Armenia and Azerbaijan and welcome the decline in tension in the region. The EU continues to believe that the status quo is unstable: the conflict has no military solution and needs an early political settlement in accordance with international law. Preparing the population for peace is an important step towards a settlement, which we are ready to promote. " The position of the Armenian side in this context is as follows from Pashinyan's statement: "We highly appreciate the balanced position of the EU on the Nagorno-Karabakh conflict, which supports the co-chairs of the OSCE Minsk Group, their position and efforts. It is a valuable contribution to ensuring peace and security in our region. I reaffirmed Armenia's commitment to an exclusively peaceful settlement of the Nagorno-Karabakh conflict. "

It should be noted that one of the key EU member states, a member of the UN Security Council, France, is one of the three co-chairs of the OSCE Minsk Group, and the above-mentioned EU position in this context is undoubtedly an important stabilizing factor in the region, despite the fact that the EU is directly not involved in the negotiation process on the settlement of the Nagorno-Karabakh conflict.

The EU position on the Nagorno Karabakh conflict is almost entirely correlated with the NATO position voiced in Yerevan by the Special Representative of the Secretary-General of the Alliance for the South Caucasus and Central Asia, James Appathurai, within the framework of the NATO Week in Armenia: "It is undeniable that NATO is interested in peace and security. We are inspired by the fact that the new government of Armenia is making new efforts in the peace process. We are also encouraged by the significant decrease in the tension on the contact line. According to NATO estimates, this conflict can only be settled peacefully. He can not have a military solution. "

- Armenia is aimed at strengthening partnership with the European Union in line with the previously proclaimed policy - no geopolitical reversals, development of relations in all directions, besides, one direction should not be against or at the expense of another, change in the quality and philosophy of foreign policy;

- relations with the European Union are considered by Yerevan as a factor of strategic importance not only in terms of their necessity for the success of domestic reforms and their economic component and as a source of financial assistance, but also on the basis of commonality of values ​​and world outlook;

- the development of Armenia-EU relations within the framework of CEPA as well as relations with individual EU member states in Yerevan is considered as one of the key security factors in the context of their consolidated balanced position on the Nagorno Karabakh conflict and support of the efforts of the tripartite co-chairmanship of the OSCE Minsk Group on its peaceful settlement, as well as the most important direction in terms of diversification of Armenia's security policy.

Ruben MehrabyanExpert of the Armenian Institute of International Relations and Security, editor of the Russian-language version of "Aravot", Yerevan, Armenia

Choice of Ukraine. Fight and not die ... Vladimir Kopchak in the Big Game program